​​​​​​​"SPP should have been rejected through national consensus, it may make a comeback" 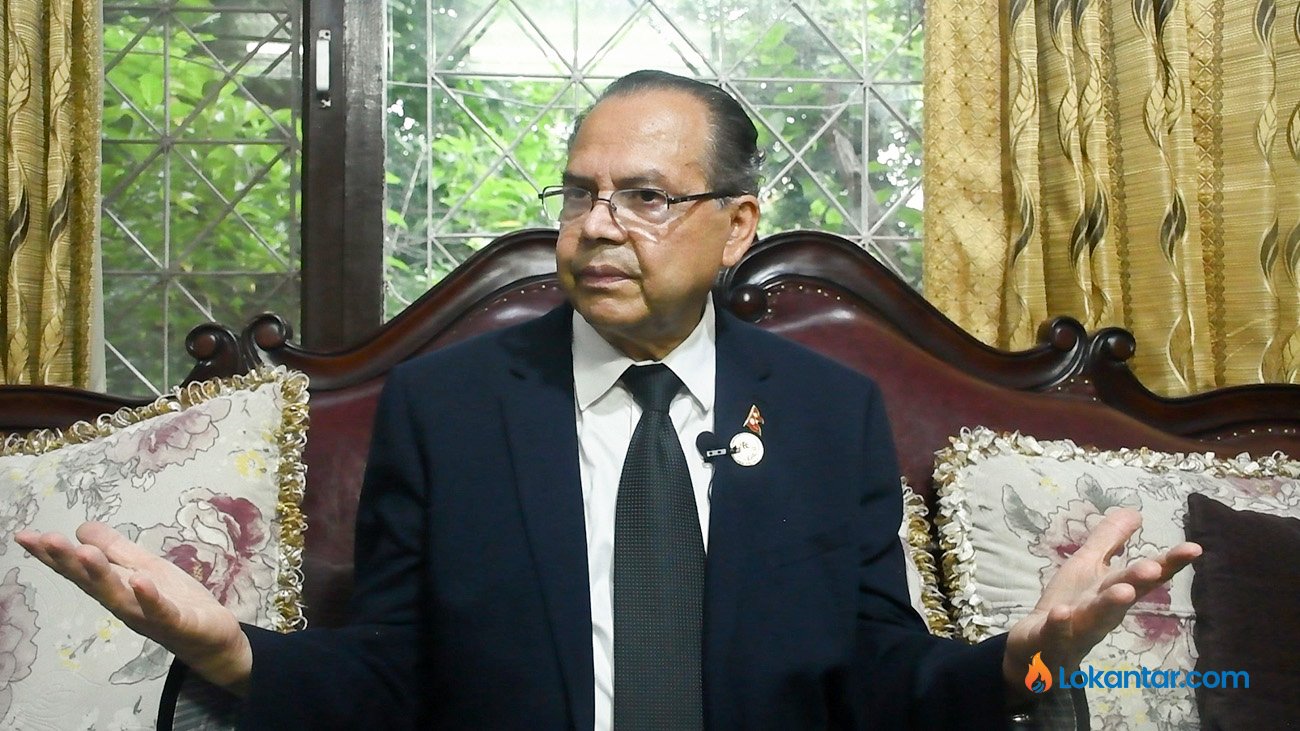 Khanal raised slogans against the MCC in the parliament on the day it was passed in the House. He has been protesting the SPP for a long time. While talking about MCC and SPP, Khanal revealed that secret talks in the PM's office too have been leaked in the past. Bimal Gautam, Sushil Panta and Bindesh Dahal of Lokantar caught up with former PM Khanal at his residence Sunday evening. Excerpts:

Secret pacts made by the former governments are coming out these days. Was there a similar deal when you were the PM?

Let me make it clear at the outset that I was always cautious about nationality and other sensitive issues. I held a conversation with the then chief secretary immediately after assuming the post of the PM. These were highly important and secret talks. I was surprised when that conversation was printed in a newspaper the next day in slightly different form. I summoned the chief secretary to ask about it. He told me that he had not given the information to anyone.

After confirming that he had not spilled the beans, we decided to investigate into the leak. At the conclusion of the investigation, I found that there are some systems in the upper echelons that leak secret information.

What I am telling now was limited to the then chief secretary and me.

You have indicated that there is a mechanism in the highest level that records secret conversations and leaks it. Did the investigation prove it?

Our initial doubt was proved almost 90 percent. There was indeed a system that kept tab of secret conversations. We agreed that there is a need of a system to counter these things. But I could not stay in the post for long. Those counter intelligence equipments need to be brought from abroad. We tried to work on it a bit. But my tenure ended soon. I don't know what happened after that.

This is a shocking revelation. Doesn't this show that our security is highly vulnerable?

Indeed! It only shows that there are various gaps in consolidating the security system of our country.

Did this conversation occur in the PMO or the residence?

I don't want to go into the details. But the conversation took place in a highly important place. After this, I stopped having conversation in that place. Information leak came to a halt after we moved location. 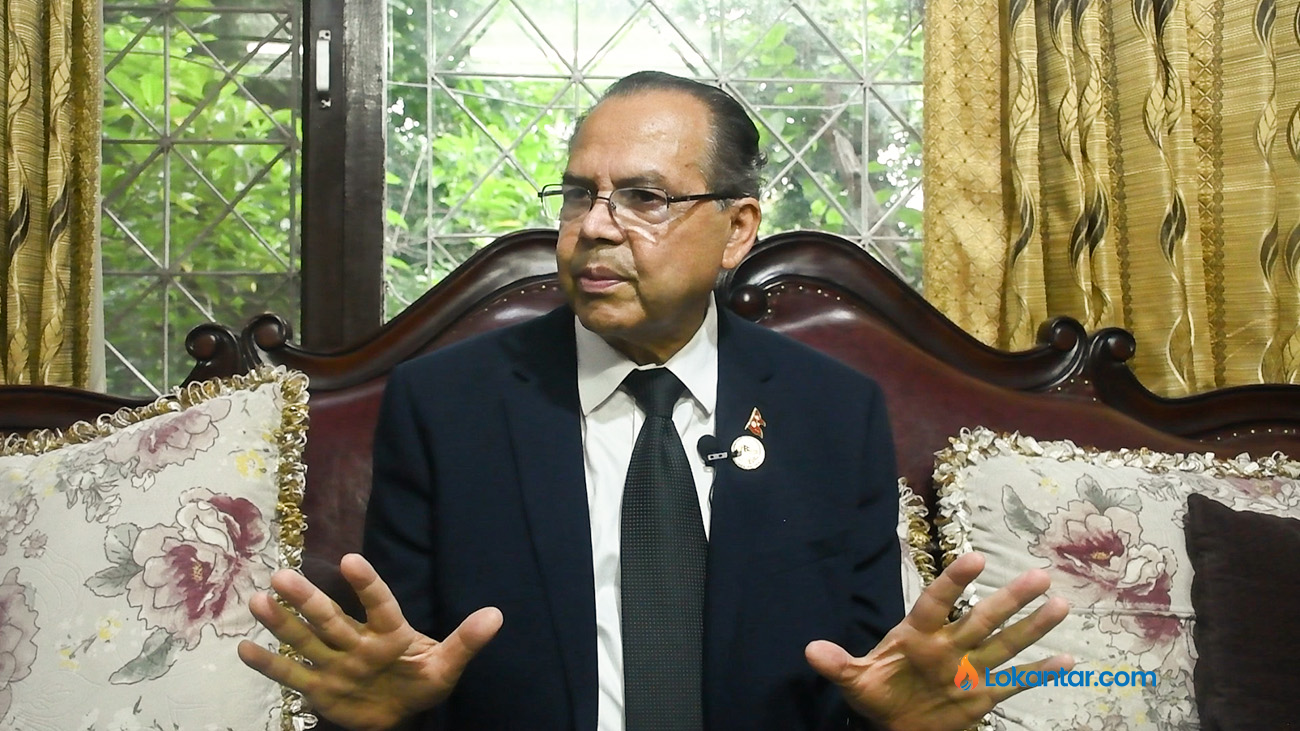 You have been talking about balanced diplomacy even after stepping down from the post of the PM. When did our country start losing balance?

Our foreign policy was balanced until the Panchayat period (till 1990). Imbalances started to creep after the systemic change in 1990. Especially the last 15 years after People's Movement in 2006 have been problematic. We thought that the country will take a different course after that historic movement. We went through 10 years of instability. Because we had to prioritize the making of the constitution and establishing peace, we could not delve into other issues.

Other prime ministers during the period too could not go deeper into other matters. We were eager to have a breakthrough but could do nothing about some sensitive issues. I got a very short tenure and it was riddled with instabilities. I was leading a coalition government. But it was a period in which we needed stability and time.

I had huge expectations from the government that was elected in the first polls after the promulgation of the constitution. But that government worked in contradiction to my expectations.

Among the top brass, you were highly vocal against MCC and SPP. You even raised slogans against the MCC in the parliament on the day it was ratified. Why did you oppose the MCC so much?

You have to understand the background. The second half of the 20th century saw tough competition between two superpowers. One superpower Soviet Union got dissolved, thereby bringing Cold War to an end. The US established it primacy for a certain period after that. It devised a world strategy to expand and entrench its influence for a long time. Different regional strategies were made under that world strategy. For instance, Indo-pacific Strategy (IPS) is one of them. MCC and SPP both are parts of the IPS. They are intrinsic parts of the US's world strategy.

While trying to expand their strategic reach, the Americans started aggressively imposing their strategy in Nepal when the country was softened up with instability. They exploited the weaknesses of the leaders here. Consequently, they introduced MCC and SPP during that period.

Look, our constitution clearly lays out the foreign policy. Does this require a separate interpretative declaration? We are in favor of the freedom of our country. We want to safeguard our nationality and territorial integrity. We have non-aligned foreign policy. We abide by panchasheel. We are obliged to the UN Charter. The constitution has included all these things. 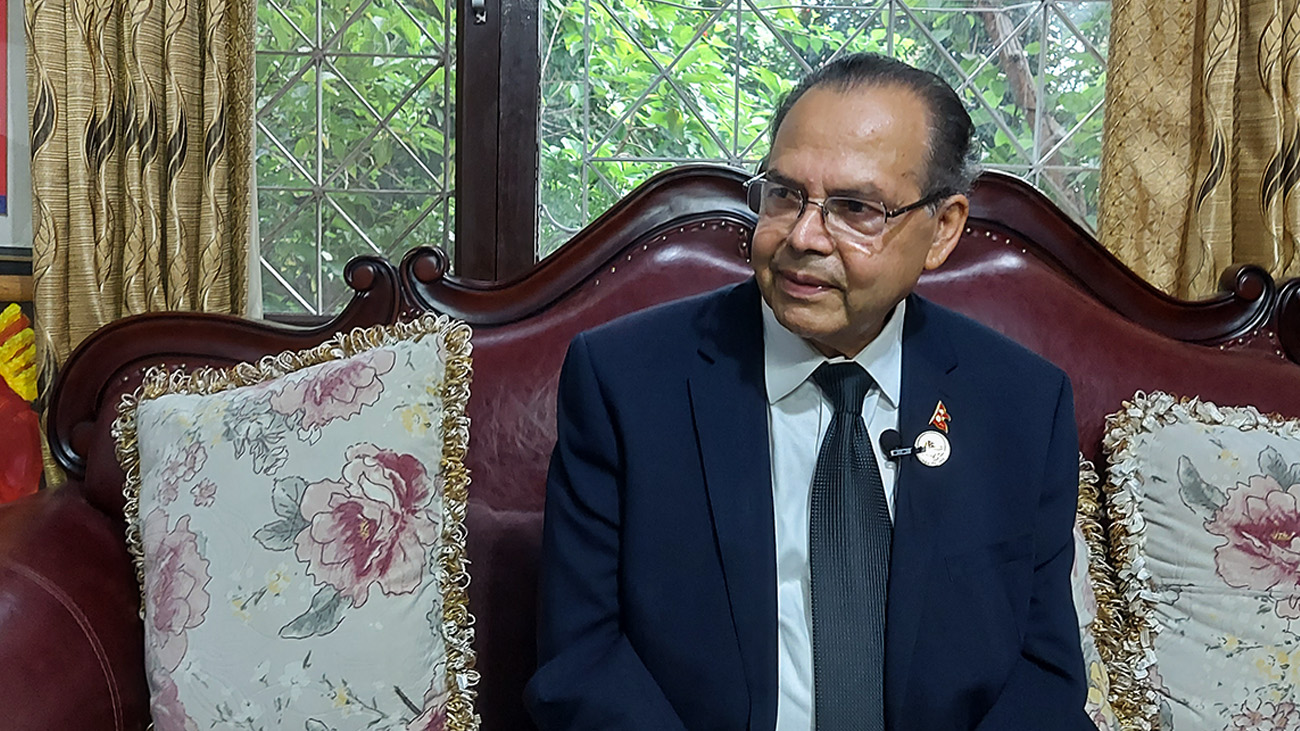 You had said that the PM was trapped in the MCC. You also said that the MCC should not be ratified even if the ruling coalition breaks down. Did the PM get trapped in MCC as well as the SPP?

Khadga Prasad (KP) Sharma Oli-led government was ensnared in multiple traps. One needs to dig out the truth whether he was voluntarily trapped or someone devised a strategy to entrap him. MCC and SPP moved ahead during his tenure.

Oli is the main responsible person for this development. Letters have been sent to the SPP during the tenure of other prime ministers after him. Others too are deep into it. But Oli is the initiator of this agreement.

Why do you say that MCC and SPP are against Nepal's nationality and sovereignty?

SPP is clearly a military agreement. Nepal has non-aligned foreign policy. We are in the middle of two big countries. These neighbors are about to become big powerhouses in the 21st century. One of them is about to become the first powerhouse while the other will become the second powerhouse. Nepal's location in between these two countries has turned into a center of attraction for international powers. That is why the necessity and relevance of non-aligned foreign policy is more important than in the past.

SPP will go against these policies. It will almost destroy our relationship with both the neighbors. As per my information, both our neighbors have become highly sensitive after SPP was floated in Nepal. Both the neighbors wish that Nepal would not accept such a partnership. One neighbor expressed happiness when Nepal decided to reject SPP. Another neighbor too is happy but it has not expressed that happiness.

Nepal is saved from a disaster. But we have been ensnared in the MCC trap. We are yet to experience its consequences. However, this latest development has provided a ray of hope that even MCC will be kept in check.

Nepali Congress and CPN-UML leadership have been pointing fingers at each other about the initiator of the SPP. It is alleged that the army failed to notify the political leadership at that time. But can the leadership shift blame like this?

Timeline and facts are still to be studied. But political leadership is responsible in all periods. It cannot give a clean chit to itself by shifting responsibility to an agency under it. It has to be accountable to the mistakes committed by the government agency. Incumbent prime minister of that time needs to take responsibility. He cannot blame the other.

Has Nepal completely backed out of the SPP or has it only stopped participating in the program? What has the ruling coalition agreed upon?

We need to understand that Nepal will not accept SPP for the time being. But we can't say anything about the future if supporters of SPP prevail or a favorable circumstance for SPP develops. I am not assured as yet. Nepali leaders and the local climate both cannot be trusted. I don't want to generalize but some leaders are untrustworthy. This is my conclusion.

There were deliberations about an all-party meet as well. Was PM Deuba in favor of ratifying the SPP?

I don't discount the possibility of SPP reentering through other means. If we go through Nepali Congress history, there are questions about its credibility. Noone knows which leader will play what role.

The country should have laid the foundation for a stable foreign policy on the basis of national consensus after the promulgation of the constitution. But we haven't been able to do even that. The previous government should have built such a policy but it produced a document unilaterally. That document would have served as the guideline had it been made on the basis of consensus. 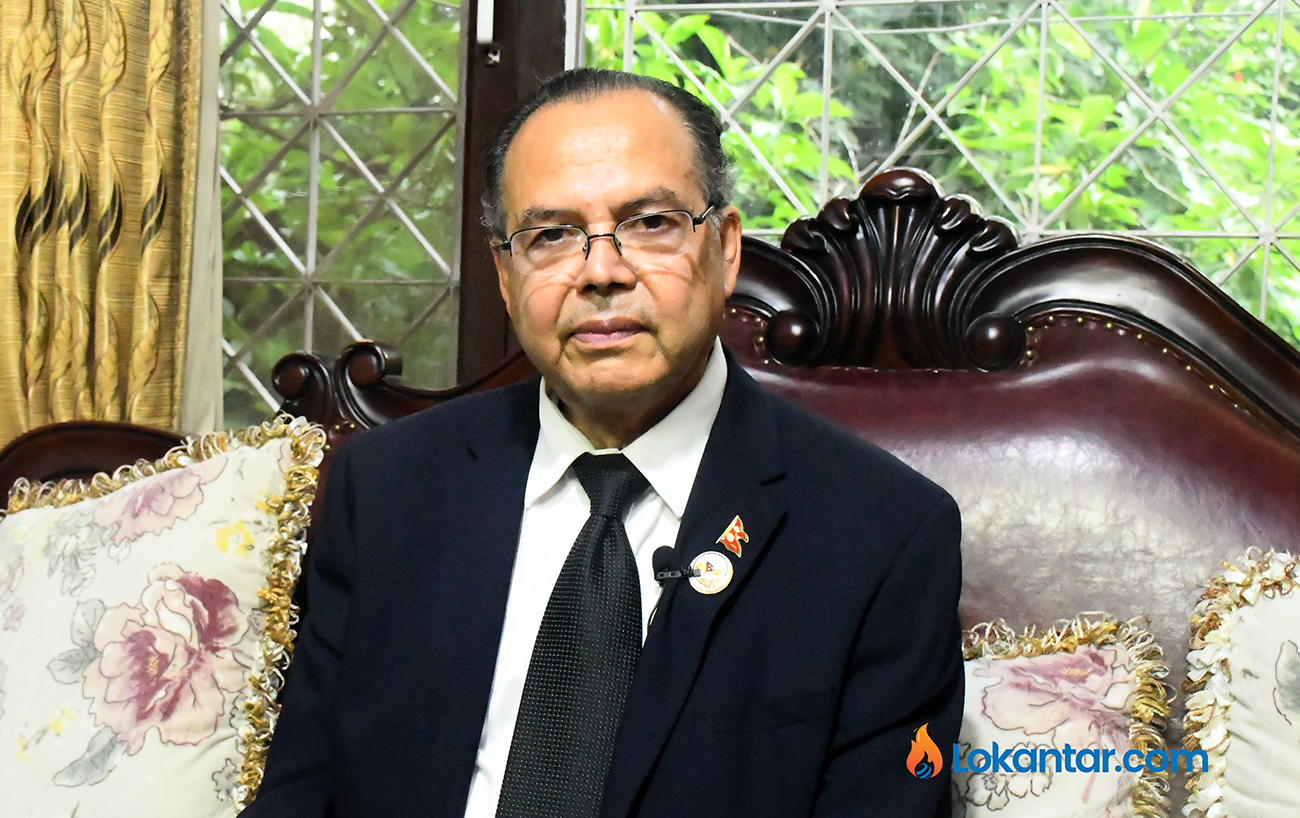 I don't think any PM or foreign minister might have read the constitution deeply. One should read Part 4 of the constitution many times. Article 51 (m) in Part 4 explains Nepal's foreign policy. It contains the provisions of non-alignment, panchasheel, UN Charter, international law and the norms of world peace. These five things are the foundation of our foreign policy. Anything contravening them goes against our constitution. Even the foreign minister should take it into consideration.

I have not seen the PM and the foreign minister serious enough to conduct foreign policy or try to understand things. MCC generated such a huge controversy. It was a demeaning compact for Nepal. But Ministry of Foreign Affairs didn't know about it. The action group under my coordination found that foreign ministry was ignorant about the compact.

Different ministries and the army themselves had made individual contacts with the Americans. However, the PM needs to take sole responsibility for this. Even if the foreign ministry commits mistakes, the PM is ultimately responsible. Sadly, our foreign policy is imbalanced and divisive.

Lastly, let's talk about national politics. You had floated left alliance immediately after the local elections. What is the possibility of left alliance in the upcoming elections?

That possibility remains. After all, possibilities are unlimited. The situation can turn favorable even if there are different obstacles. But things can go negative as well. Wider leftist alliance is in country's interest. It can serve the country at a time when nationality is facing serious problems. All people in favor of safeguarding nationality need to come together to save this country.