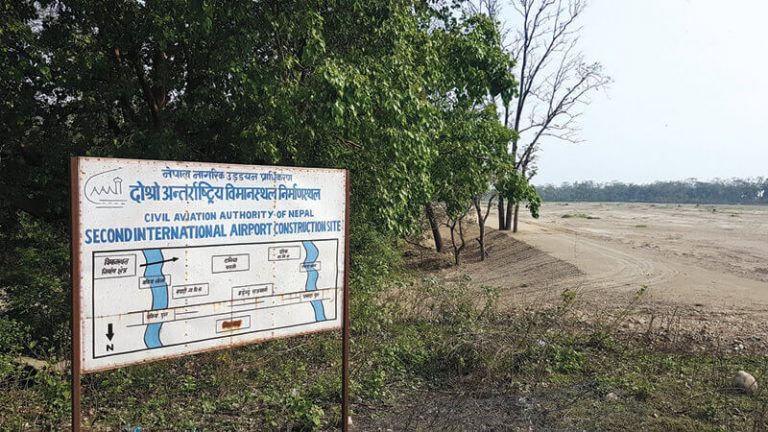 Development is often defined as constructive destruction. Definitely, there will be a problem when honchos assume it as destructive construction.

The government’s proposal to construct second international airport at Nijgadh comes as a direct conflict between development and environmental issues – an interface between economy and ecology. Sustainable development is expected to address both issues but it is not without controversy when it comes to practical realities.

Giving its verdict on the case filed at the Supreme Court of Nepal, three out of five presiding judges in the full bench issued an order nullifying all activities related to the construction of the Nijgadh Airport. They also directed the government to opt for a new location. The remaining two posited a different opinion: construct the airport at Nijgadh considering minimal damages to the environment, including the prohibition to establish an airport city.

Meanwhile, the government and the major political parties in the alliance are determined to go ahead with their decision. Probably to evade possible cases related to the contempt of the court, they have welcomed the verdict. However, there is now an obvious cleavage between the two branches of the state. If not put into proper perspective, the verdict is expected to exert an enduring and a long term impact on country’s development.

The construction of Nijgadh Airport is an ambitious project designed to establish an airport city, possibly, with an airport hub that, if successful, is expected to lift Nepal away, not just from its image of landlocked, mountain locked, India-locked country but also from its air-locked status. Being a rectangular shaped country, stretching from East to West and mountain range in the North, there is little elbow room to land planes from the South without seeking permission from India. With a proposed area of 80 sq. km, Nijgadh Airport is expected to be third largest commercial airport in the world.

The construction of Nijgadh Airport is an ambitious project designed to establish an airport city, possibly, with an airport hub that, if successful, is expected to lift Nepal away, not just from its image of landlocked, mountain locked, India-locked country but also from its air-locked status.

The rumour market is afloat with a conspiracy theory that it is not so much the court order but the exercise of clout by the southern neighbour that is trying to scuttle the development of the airport. Imagine the possible impact of Nijgadh Airport if it turned to be an airport hub in South Asia! As the proposed airport is located in Madesh Pradesh, there is also no shortage of explanations blaming pahadi politics to disenfranchise terai people from the fruits of development. There are other explanations seeking to put blame on land and timber mafia eyeing possible lucrative deals to the strategic moves by political parties to woo voters in the upcoming provincial and federal elections.

The genesis of constructing a second international airport in Nepal started immediately after two disastrous plane accidents in early 1990s belonging to Thai and Pakistani airlines. A pre-feasibility study organized in 1995, using 13 different criteria, had determined Nijgadh to be an appropriate place among the eight selected locations for constructing second international airport. A detail feasibility study was organized in 2008. In 2015, the government fixed the required plot of land and in 2017 signed an agreement with the Nepal Army to clear forest for airport construction. We have a tendency either to work fast or slow, nothing in-between.

There is a popular saying in judiciary, “justice delayed is justice denied”. But inordinate delays in the implementation of development projects in Nepal have robbed the country's capacity to develop by way of time and cost overruns. Even after more than three decades of planning and implementation, parched Kathmanduities are not sure when Melamchi drinking water will be supplied to their homes. Given Nepal’s track record of development, construction of Nijgadh Airport could be a mirage in itself.

There are various controversies surrounding the construction of the airport. These ranges from the required plot of land to clearing of number of trees to the preservation of flora and fauna, natural habitat to the resettlement of population. Forget the opponents, even the proponents are not sure of funding source.

Issuing a 119-paged verdict, the court speaks that prerogative lies with the Executive to decide on the location, modality and size of the airport. However, the court has to intervene only because the petitioners have raised the issue of its constitutionality or the due process required in the construction of the airport. The court finds that activities like specification of the exact location of the airport, clearing of the forest and some basic infrastructure works have been carried out even before the completion of the Environmental Impact Assessment (EIA) report. There is even mentioning of plagiarism in the preparation of EIA report – copy paste of the sections from a hydro-power project.

It is absurd to compare the proposed area of the airport with nearly a dozen of other international airports to speak on excessive size of the Nijgadh Airport. The appropriate question should have been our management capacity to handle the proposed airport.

While giving their verdict, the judges seem to have been swayed away by the environmental costs (losses) than by the benefits to be derived from the construction of the airport.

The verdict has defined development works as “not just a matter of wishful, populist and emotional works but also a matter of objective, realistic, factual, legitimate and sustainable”. While giving their verdict, the judges seem to have been swayed away by the environmental costs (losses) than by the benefits to be derived from the construction of the airport. When considerations for costs outweigh benefits, the preference is for risk aversion rather than risk taking behaviour.

Definitely, there are procedural flaws in government’s decision to construct Nijgadh Airport. Given the fact that there is a kind of national unanimity in constructing a second international airport, the crux of the matter rests with locational issue. What guarantee is there that, say, location x, y or z in the country will not pose same ecological challenges? As no one has come up with an alternative to Nijgadh Airport, the court verdict to look for another location will remain in controversy.

Postscript: It is reported in the French media that in the aftermath of fatal car accident in Paris that took the life of Princess Diana, the French judges enrolled themselves in the classes of physics and dynamics because they would have to grapple with the concepts like velocity, impact and force. Is our judiciary poised for this kind of training and learning?