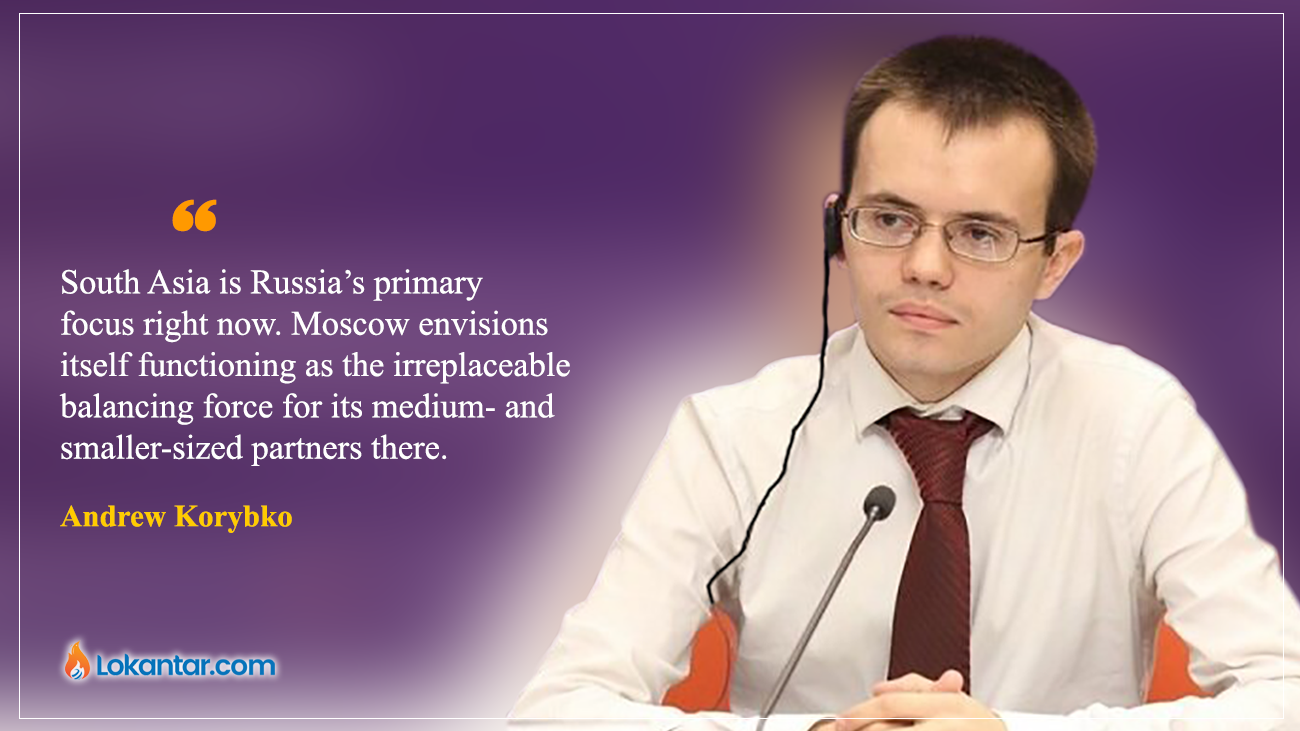 Andrew Korybko is a Moscow-based American political analyst who writes extensively on world affairs. Korybko has a deep understanding of the changes in world order and the onset of multipolarity in international relations. Bindesh Dahal of Lokantar conducted an email interview with Korybko with focus on Russia's outreach to South Asia and its impact on Nepal in the multipolar age.

You recently wrote a comment on Russia's Pivot to the East. How will Russia engage with South Asia in light of the recent developments?

The unprecedented US-led Western sanctions on Russia resulted in the forced “decoupling” of that Eurasian Great Power and the EU. This in turn compelled Moscow to prioritize its relations with non-Western countries. Since India is among Russia’s top allies anywhere in the world and decisively intervened to preemptively avert its strategic partner’s potentially disproportionate dependence on China as a pressure valve from Western sanctions, it therefore follows that this civilization-state will play a leading role in the Kremlin’s Pivot to the East (Global South).

This explains their renewed focus on the North-South Transport Corridor (NSTC) through Iran, which the Russian Transport Minister said in late May is practically his country’s only existing international logistics corridor to the wider world. From Russia’s perspective, South Asia with India at its core is a viable replacement for the EU, with bilateral trade expected to be mostly conducted across the NSTC upon that project’s full completion. Each regional country practices a policy of principled neutrality towards the Ukrainian Conflict and regards Russia as a reliable third-party balancing force between the US and China.

To elaborate, Indian thinker Sanjaya Baru posited a few years back that International Relations are presently in a bi-multipolar intermediary phase of a larger global systemic transition to multipolarity. The American and Chinese superpowers exert the most influence over events, followed by Great Powers like Russia and India, below which are comparatively medium- and smaller-sized states. He predicted that the last two categories of countries will balance within and between one another in order to maximize their strategic autonomy vis a vis the two superpowers.

Russia and India endeavor to jointly create a third pole of influence with Iran that other countries can gravitate towards for collectively enhancing their respective autonomy within this complex system. From Nepal’s perspective, closer relations with Russia can relieve the perceived pressure that it’s come under by not just the American and Chinese superpowers, but also neighboring India. Bangladesh, for example, is also in a similar situation, as is Sri Lanka. These comparatively medium- and smaller-sized states would therefore objectively benefit by strengthening relations with Russia.

From Nepal’s perspective, closer relations with Russia can relieve the perceived pressure that it’s come under by not just the American and Chinese superpowers, but also neighboring India.

From Russia’s perspective, they help diversify its regional dependence on India, which will always remain its top partner in South Asia and anywhere in the world. That said, Russia also wants to help others balance between the superpowers since this aligns with its grand strategic vision. For this reason, Russia is equally eager to enhance ties with the rest of the region. It’ll take time to bear fruit, but everything’s already moving along that trajectory, especially with respect to the NSTC that’ll facilitate the expansion of mutual trade in the coming future.

Do you see Russia and China pushing for a combined Eurasian economic project? Is so, how would it impact Nepal and South Asia?

Russia’s grand strategy is officially its Greater Eurasian Partnership (GEP) that it unveiled a few years back. This envisions its Eurasian Economic Union (EAEU) functioning as the core of supercontinental geo-economic integration. It was initially supposed to serve as a bridge between the EU and China but that’s no longer possible considering the unprecedented US-led Western sanctions and resultant “decoupling” of Russia and that bloc. Nevertheless, the GEP is quickly adapting by focusing exclusively on the Global South, and in particular India, with which it hopes to reach a free trade agreement sometime soon.

As for China, its grand strategy is what it describes as the Community of Shared Future (CSF), which it hopes to build through its Belt & Road Initiative (BRI). About that, this is a global series of megaprojects that’ll collectively integrate Eurasia upon completion. With this in mind, it can be said that the Russian and Chinese grand geo-economic strategies are complementary and objectively serve the interests of all Eurasian countries. They’re also poised to converge in Central Asia, which will become the centerpiece of their shared vision.

The South Asian states cooperate with both Great Powers but much more with China than Russia. Nevertheless, closer ties with the second-mentioned can help preemptively avert potentially disproportionate dependence on the People’s Republic and thus safeguard those countries’ strategic autonomy. Nepal is in an interesting geo-economic position since it’s literally between China and India, both whom it shares excellent relations with though some forces are still concerned that it might become dependent on one or the other.

It’ll take time for Russia's economic relations with the rest of South Asia to grow beyond present focus on India, but it’s inevitable that this will happen.

Therein lies the importance of Russia as a neutral third-party balancing force to preemptively avert this scenario. As was earlier written, it’ll take time for its economic relations with the rest of South Asia to grow beyond their present focus on India, but it’s inevitable that this will happen. To accelerate this process, regional states should proactively reach out to Russia to explore mutually beneficial geo-economic opportunities such as flagship infrastructure projects and other investments, which will help Moscow get a clearer picture of exactly what their needs are and how it can be best help to meet them.

Is it true that Russia sees Nepal and other small states through the eyes of India and China?

No, not necessarily. While those two Great Powers are Russia’s top partners in the world, it doesn’t see comparatively medium- and smaller-sized countries through the prism of its relations with them. Rather, it truly regards them as independent states, though it also understands that it’s beneficial to enter into joint projects with neighboring countries like India and China like it could prospectively do in Nepal. Since India knows Nepal better than anyone else, it might begin by exploring this option with Delhi before doing so with Beijing. 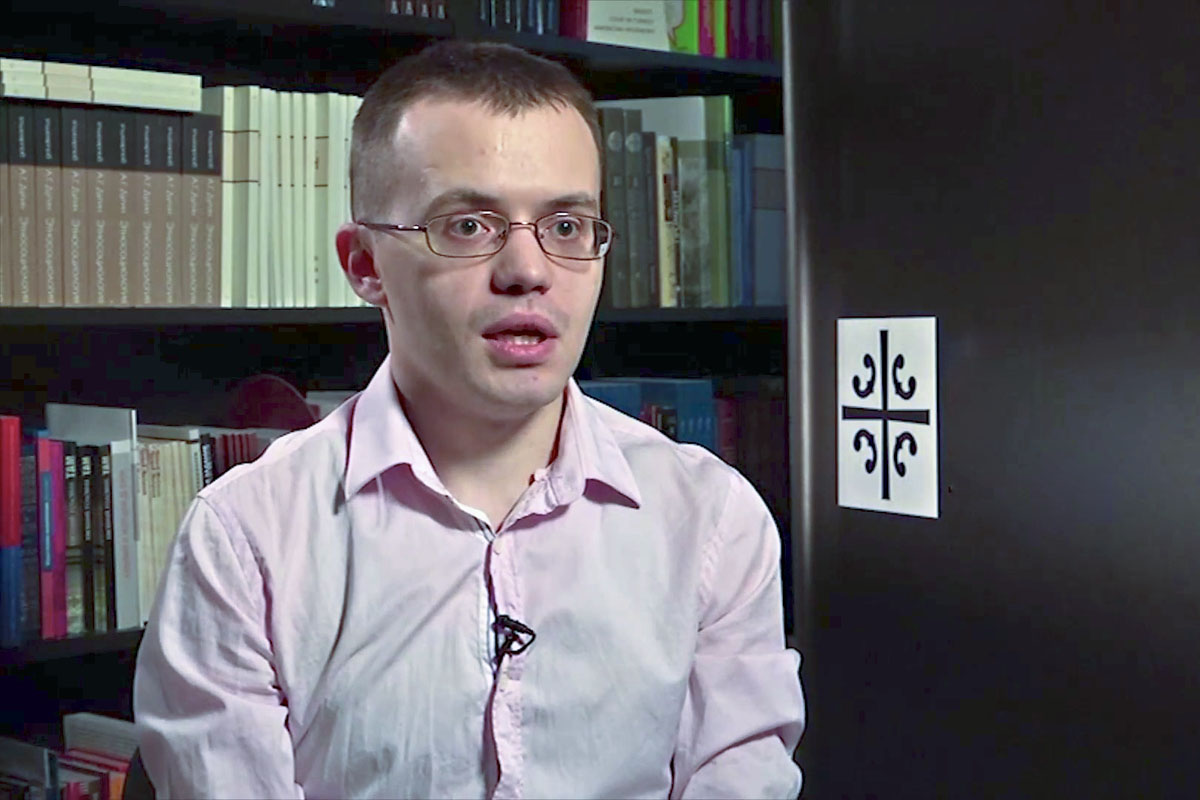 In terms of the bigger picture, Russia realizes that the geostrategic role that it can play for comparatively medium- and smaller-sized countries like Nepal is to help them preemptively avert potentially disproportionate dependence on larger countries like India and China. This aligns with its vision of helping them safeguard and subsequently maximize their strategic autonomy in the present bi-multipolar intermediary phase of the ongoing global systemic transition to multipolarity, the view of it expects other countries to share in the coming future.

The US is aggressively imposing its Indo-Pacific Strategy in Nepal and trying to militarize the region. What will Russia do to counter US push in the overall region?

Russia has only recently commenced its “Return to South Asia”, which has been prioritized in recent months as a result of India’s decisive intervention in serving as its alternative valve from Western pressure in order to preemptively avert its potentially disproportionate dependence on China. For that reason, it hasn’t yet crafted a comprehensive regional strategy that diversifies from its focus on India, yet it’s inevitable that it’ll do so soon since it understands the geostrategic role that it can play in helping medium- and smaller-sized countries like Nepal balance between larger ones.

Moscow hopes that the role that it can play as a neutral third-party balancing force for others will be enthusiastically embraced by those countries that require it the most.

The long-term goal is to use India as its springboard for engaging more robustly with the region, especially upon the eventual completion of the earlier mentioned free trade talks and the NSTC with Iran. These two will accelerate Russia’s “Return to South Asia” by giving it the heft that it needs to become actually meaningful in a practical sense beyond simple diplomacy. It’ll of course take time, but everything’s already in motion. Moscow hopes that the role that it can play as a neutral third-party balancing force for others will be enthusiastically embraced by those countries that require it the most.

How will Russia shape the multipolar era while the West is imploding?

The West’s implosion far predated the Ukrainian Conflict but was greatly accelerated by the counterproductive consequences of the anti-Russian sanctions that resulted in crashing their economies, especially the EU’s. Nevertheless, it’s premature to predict that the West will fully implode. Rather, it’s undergoing a very painful self-inflicted transformation as the US successfully reasserts its declining unipolar hegemony within its traditional “sphere of influence” there.

America coerced the Europeans into sanctioning Russia despite predicting that this will crash their economies, which was part of its Machiavellian plot to weaken the euro and bankrupt its companies’ competitors in the bloc. The EU dutifully went along with this since it lacks strategic autonomy and was also misled by the US’ ideologically driven false claims that the West has to “show solidarity in the face of Russia’s authoritarian expansion”.

Amidst the West’s transformation, Russia sees an opportunity to become a leading force across the Global South, which is driven by economic necessity.

Tough times are ahead for the EU, and it’ll look markedly different by the time everything is done compared to how it was prior to the Ukrainian Conflict’s latest phase, which to remind everyone actually started after the US-backed spree of urban terrorism that culminated in the fascist coup popularly described as “EuroMaidan”. Amidst the West’s transformation, Russia sees an opportunity to become a leading force across the Global South, which is driven by economic necessity.

To this end, it’s prioritizing its special and privileged strategic partnership with India as was earlier explained, which will in turn enable it to “Return to South Asia” upon the completion of free trade talks and the NSTC. Similar moves are being made in Africa, Latin America, and West Asia, too, but South Asia is Russia’s primary focus right now. Moscow envisions itself functioning as the irreplaceable balancing force for its medium- and smaller-sized partners there like Bangladesh, Nepal, and Sri Lanka.

This emerging model will be practiced and ultimately perfected in South Asia first before being replicated elsewhere, especially across Africa. Upon that happening, Russia will play a major role in the global systemic transition to multipolarity by helping to bolster its many partners’ strategic autonomy, which will in turn facilitate the gradual evolution of bi-multipolarity into tripolarity with it, India, and Iran prior to resulting in the inevitable outcome of much more complex multipolarity (“multiplexity”).