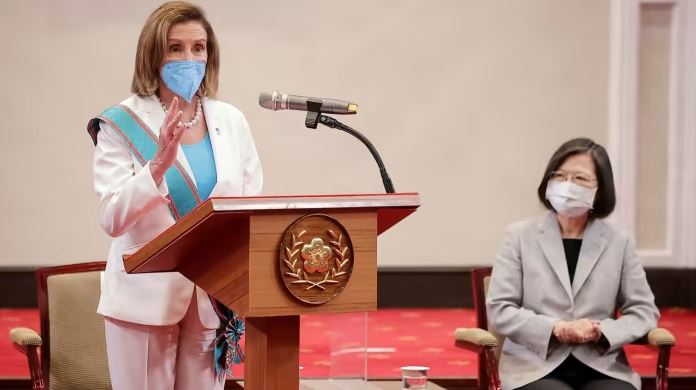 Speaker of the U.S. House of Representatives Nancy Pelosi's visit to China's Taiwan region, which risked universal condemnation, was a seriously violation of the one-China principle and the three China-U.S. joint communiqués.

The visit seriously infringed on China's sovereignty and territorial integrity, sparking strong resentment of the Chinese people and wide opposition of the international society.

Pelosi's visit was a deliberate and vicious act to escalate tensions across the Taiwan Strait. The Taiwan question is the most important and sensitive issue at the very heart of the China-U.S. relations, and the one-China principle remains the political foundation for China-U.S. relations.

However, Pelosi claimed her visit didn't contradict the U.S. policy towards China and the U.S. would not abandon its commitment to Taiwan. This in essence instigated "Taiwan independence" and once again revealed the scheme of the U.S. to strategically contain and consume China with the Taiwan question. Such mean trick fully exposed the hypocrisy of the U.S. on the Taiwan question.

The U.S.-Taiwan collusion and provocation came before China's legitimate countermeasures, which is an undeniable fact. However, Pelosi, to deflect the blame on China, accused Beijing of dramatically increasing tensions with Taiwan in recent years.

The Taiwan Strait is facing a new round of tensions and severe challenges, and the fundamental cause is the repeated moves by the Taiwan authorities and the U.S. to change the status quo. The Taiwan authorities have kept seeking U.S. support for their independence agenda. They refuse to recognize the 1992 Consensus, go all out to push forward "de-sinicization," and promote "incremental independence."

The U.S., for its part, has been attempting to use Taiwan to contain China. It constantly distorts, obscures and hollows out the one-China principle, steps up its official exchanges with Taiwan, and emboldens "Taiwan independence" separatist activities.

Pelosi noted her visit aimed at promoting regional peace, but it exactly proved that the U.S. has become the "biggest destroyer" of peace across the Taiwan Strait and for regional stability, as well as the chief culprit escalating tensions across the Taiwan Strait. China's countermeasures are justified and necessary, and it's a right enjoyed by any independent sovereign country.

Pelosi's visit to Taiwan, disregarding the general picture of the China-U.S. relations, was totally an ugly show of her to seek personal political profits. The U.S. mid-term elections are approaching but there have been scandals around the Pelosi family. To divert attention and gain an advantage in the elections, Pelosi resorted to the "Taiwan card," sowing discord between China and the U.S. to leave a so-called political legacy. She claimed to "stand with Taiwan," but is indeed taking Taiwan as a pawn on her chessboard. Her "democracy" and "human rights" are in essence private profits and businesses. U.S. mainstream media and the international society have widely criticized Pelosi for her irresponsible act, saying the visit was stupid, dangerous and unnecessary.

The political farce cannot change the historical and legal fact that there is but one China in the world, Taiwan is an inalienable part of China's territory, and the Government of the People's Republic of China is the sole legal government representing the whole of China. It is a consensus of the international community and a basic norm governing international relations.

Violating the one-China principle and the "five noes" commitment, the U.S. showed no sense of responsibility as a major country and further damaged its credibility.

People with insight from the international community believe that any U.S. attempt to distort and break the one-China policy, directly or indirectly, would stain the history and law, break the promises made by the U.S., and hurt the international credibility of the U.S.

The People's Liberation Army are currently conducting joint military operations around Taiwan Island, which are a stern deterrent against the recent major escalation of the negative acts by the U.S. on the Taiwan question, and a serious warning against separatist activities seeking "Taiwan independence."

These operations demonstrate China's firm resolve, determination and capability to safeguard its state sovereignty and territorial integrity, and the country's responsible manner in protecting peace and stability in the Taiwan Strait.

The Chinese government is capable of building a strategic environment for national reunification and defeating "Taiwan independence" separatist forces in any form. Any foreign intervention is doomed to failure.

China's reunification is inevitable. It is an unstoppable trend of history that will never be changed because of Pelosi's visit. Any individual or country that attempts to reverse the trend and play the "Taiwan card" to undermine China's sovereignty and territorial integrity will pay a huge price.