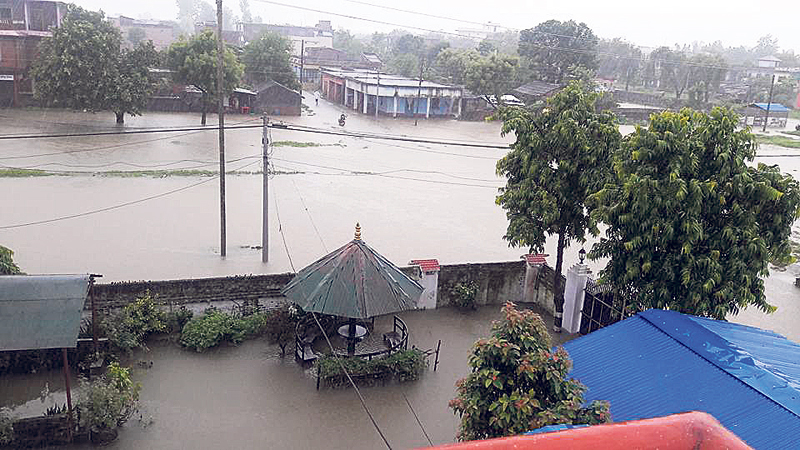 Tikapur, 5 August (2022) - People residing in low-lying areas in Kailali who had their homes and farm assets damaged and destroyed by floods from the offseason rains in last October fear of recurrence of tragedy with monsoon rains becoming regular.

They grow restless with rainfall becoming regular and the rise of waters levels in the local rivers.

Sushila Basnet of Baideki is still haunted by the consequences of freak rains last year.  With monsoon rainfall becoming regular, Sushila's family and her neighbours, their days are not normal. The potential risk of floods from the Mohona and Pathraiya rivers does not let them sleep well. "We are under constant fear of flood from the rivers. When rainfall starts, we keep ourselves busy in texting and telephoning with each other in the settlement to keep us updated about the existing situation".  The post-monsoon disaster was unexpected.

Bal Bahadur Chaudhary of Pratipur was happy to see his rice crops well-grown cultivated on four bigha (one bigha is equivalent to 6,772.41 square metres) of land. They were ready for harvest.  As he was preparing to harvest the crops, the unseasonal down powers swept away them.  He felt totally down at the moment with seeing no one from the government level coming to lend helping hands to the helpless farmers like him.

He doubts whether government is there for helping the farmers in need who are much worried about their physical safety at the moment.

Meena Devi Chaudhary found her helpless to witness ripen rice crops damaged by the rains.   "We are living in constant fear of water-inducted disasters. How are days could be normal in this situation."

Community Disaster Management Committee chair Narendra Prasad Regmi said people face various problems from water-induced disasters. As he claimed, the local government, various organisations and the committee are working to address their issues. As he said, training on physical safety measures during the disaster was conducted at the local level. Youths are put on standby for responding to the crisis.

The locals have been demanding that all the three tiers of the government should create a safe environment for the people along with preparedness measures to be safe from the disasters. The Tikapur Municipality has organised a search and rescue training at its ward number 8 settlement which suffered massive damages due to the last year's floods. The Municipality, with the support from various organisations, imparted the training to the community on how to face disaster situations.

Speaking in the concluding session of the training, Deputy Mayor Khadak Bahadur Shah highlighted the importance of information at times of disaster. "Timely information at times of disaster can help in minimizing the damage. So the information related to disaster should be disseminated promptly in the community," he said and stressed on collaboration among the Armed Police Force, the Nepal Police, Red Cross and the community for mitigating the risk and damage from the disaster as well as for its management.

Training was imparted on both theoretical and practical aspects of search and rescue operation.

Rain-fed flood in the Karnali River wreaked havoc in this area last year and the risk has not reduced this year as well. The embankment constructed on the bank of the Karnali River by the Rani Jamara Kulariya Irrigation Project has started breaking at several places, increasing the risk.