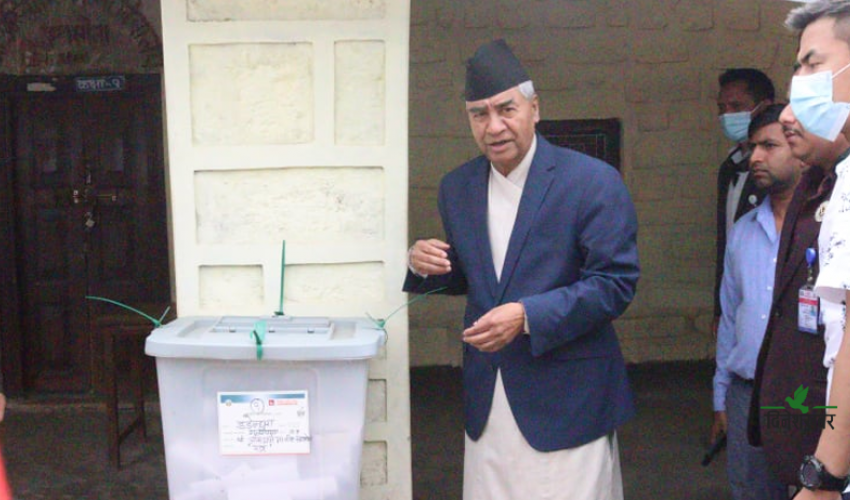 Kathmandu, 15 August (2022) - Prime Minister and Nepali Congress President Sher Bahadur Deuba has termed local levels as the first school for democracy and stressed a leadership with competence and vision should be elected right from the local level to strengthen democracy since its foundation.

"The local government is the closest government to the people and its delivery should be for the convenience of the people," he stressed, urging people's representatives to dedicate their terms for the cause of people and prove themselves as the friends of people in need.

"How you deliver as the people's representatives, the people could feel your presence. How effectively and promptly you will be able to deliver, how much you will be able to expedite development efforts, the people could feel the presence of good governance and their trust and confidence on the government will be further increased," the Prime Minister told the people's representatives, hoping that they will internalize his remark and act accordingly.

In his address to a two-day orientation  organised for district coordination committee  chairs and vice chairs and  mayors and deputy mayors/ chairs and vice chairs  at the local governments who were elected from the May, 2022 local elections here today, the Prime Minister called on them to prioritise the available resources  and utilise them.

Stating the local levels have significant constitutional rights and responsibilities in the three-level federal set-up in the country, he said people's representatives should prove themselves as the true servants of the people instead of trying to become their rulers. He urged them to do their best to meet the people's expectation.

It is the major responsibility of the local government to deliver quality services promptly, efficiently, effectively and ensure the good governance, according to the Prime Minister.

Stressing the need for people's representatives to maintain cordial relations and proper coordination among people beyond political interests following the election, the PM said it was quality of an accomplished leadership to establish an equal access in terms of development and service delivery by accommodating all.

In view of the November 20 parliamentary and provincial elections, he expressed the hope that voters would pick their representatives based on works and services they have delivered to the local people of their respective constituency.

He urged NC leaders and cadres to give their best to make party victorious with majority in the polls by winning hearts of people and through a corruption-free and legal way.

Reiterating that the NC, committed to democracy, had played an important role in various people movements since 2007 BS to 2062-63 BS, the PM said, "It is a matter of pride and prestige for you all to become people's representatives from the party. Now, you have to execute your duty in a way that would further polish the party carrying the glorious history and inspire the new generation. The new generation could learn from you." They should ensure transparency, quality and accountability in their duty, he emphasized.

Prime Minister Deuba viewed that the success was achieved in May 13's local level election due to electoral alliance within the five-party coalition and expressed his confidence towards success in upcoming elections through the same. Stating that discussion for that had already started and they would reach the conclusion soon.

Assuring that tickets for the election would be distributed judiciously, the PM urged all the party leaders and cadres to work in a way that wins the hearts of public. "There is no one greater than the public."

Similarly, Vice-president Dhanaraj Gurung called for transparency and accountability in delivering public services. He urged the people's representatives to take this into account while delivering and also appealed with them to work in line with the election manifesto and commitments.

Arguing that the office bearers in the local levels were the foundation of the party, he requested them to play their part for the Nepali Congress to secure majority in the election results.

A total of 34 chiefs of District Coordination Committee, 141 mayors, 110 deputy mayors, 188 rural municipality chairs and 190 vice-chairpersons of the rural municipalities were invited at the programme organized by the Nepali Congress Central Policy, Research and Training Academy in Lalitpur.

Also, in attendance in the event were Nepali Congress's central working committee office-bearers and members. Experts on constitution, local level, revenue and interrelation among the three-tier government are scheduled to present their working papers in the event.

On the second day of the event, party's Vice-President Purna Bahadur Khadka, general-secretaries Gagan Kumar Thapa and Bishwa Prakash Sharma, leader and Minister for Home Minister Bal Krishna Khand and Nepali Congress's spokesperson Dr Prakash Sharan Mahat among others will impart training for the participants, it was shared.