Conflict victims' decry-"When are we getting justice?" 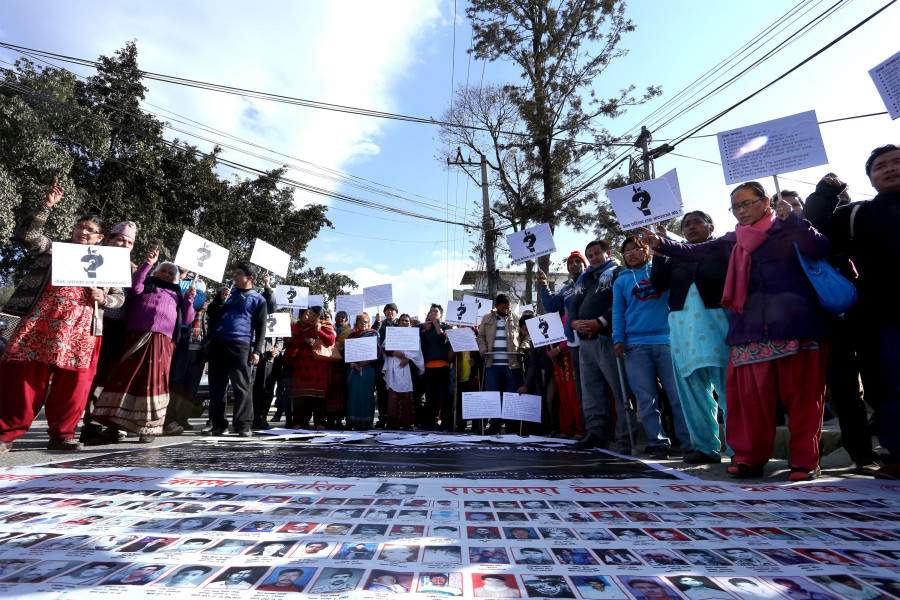 Baglung, 23 September (2022) - The conflict victims speaking at a programme in Baglung district have grieved that the government had not been able to give them information on the missing ones and dead ones during the decade-long Maoist insurgency.

Stating that the march for justice for years had left them frail and almost on the verge of being broke, they said they felt hurt due to State's 'abnormal' treatment towards them.

"We are long waiting for justice. The pain of losing the loved ones during the conflict is there. What hurts more is the 'adverse' treatment of the State towards us. The State could not honour them who offered their lives to protect the country and public. Indifference towards the families of conflict-victims is unfortunate," they said.

One among the conflict victims Sachidananda BK lamented that he was not served justice although he was fighting for the same for so long.

"When are we getting the justice? We are tired while fighting. Where are our missing relatives? How are they doing? There is no information about their whereabouts although years have passed by since their missing."

According to him, the condition of the conflict-era victims was becoming delicate and miserable with each passing day and much to their dismay, none concerned was paying attention towards it.

He blamed that the government could not offer some respite to the justice seeker conflict-victims which was further adding to their woes.

"We have been struggling continuously since long for justice. Our situation is getting worse day by day. No one has paid attention to uplift our lifestyle. We have been knocking the doors for justice, but it has not been addressed yet," said BK.

He expressed the view that the government should create environment conducive for livelihood of the victims.

BK mentioned, "It's been years we lost our relatives. No one reached out us to know our situation. The government could have done something for supporting the livelihood of the victims, but nothing has been done so far. The victim families have been lots of problems. The bodies concerned are not serious towards it. We have no place to tell that we are in injustice."

We have been hoping for justice so long. The government should clearly mention if it cannot address the matter of conflict victims, he lamented.

Similarly, conflict victim Jasodha Devi Sharma shared that they would continue their struggle until they get justice.

Although they had got different types of assurance in the past, they have not yet got justice, she added.

"In past we were assured of justice from various quarters, but the reality is that we literally found no one by our side who believes our agenda is genuine and we deserve justice. Hope for justice has not vanished though it is faded. Our sufferings are overlooked. We continue to fight for justice until it is served," the woman narrated.

As she said, only those who are forcefully separated with the family members could feel the pains of them. She accuses the authorities concerned of disrespecting those killed and forcefully disappeared during the war and neglecting the voices of their families for justice.

She said, "Those who were there to assure that we would be served justice now decline to attend our programmes. The State seems hapless in regard with our agenda."

According to her, the conflict survivors in the district tried to make leaders of top political parties realise their situation, but they were apathetic.

"Then to whom we expect for justice. If the government is unable to heal our wounds, we expect it announce it publicly. We do not want to live in confusion any more. So we want the government not to confuse us anymore," she said.

A total of 149 had lost their lives during the war in Baglung while 24 are in the list of forced disappeared. Two have been found.

The armed conflict started from 13 February 1996 and lasted till 21 November 2006, resulting in the deaths of over 17,000 people, including civilians, insurgents, and army and police personnel while hundreds of thousands of people were internally displaced, mostly throughout rural Nepal.