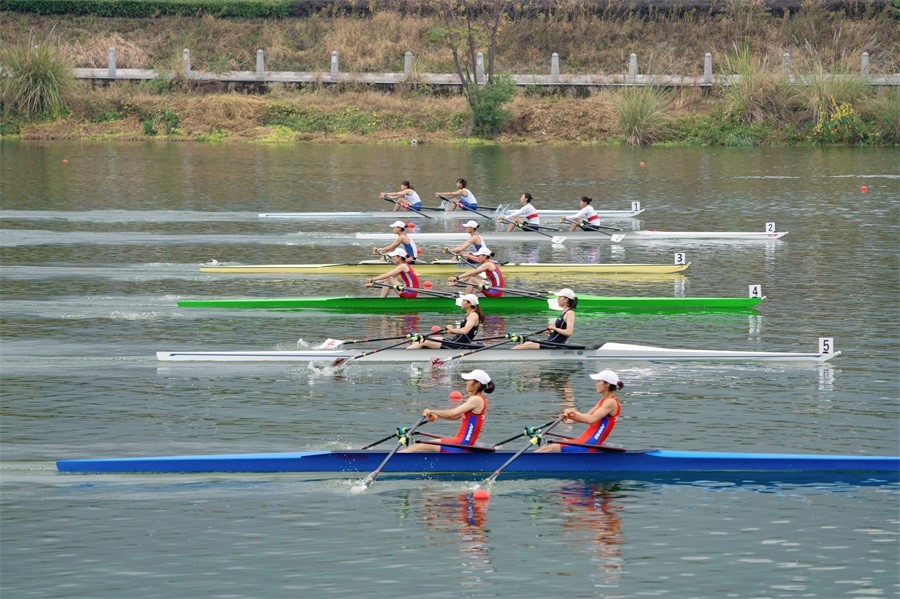 The National Rowing Championships 2022 is held on the Nanming Lake in Lishui, east China's Zhejiang province, from Nov. 2 to 6. (Photo courtesy of the 19th Asian Games Hangzhou 2022 Organising Committee)

The National Rowing Championships 2022 was held on the Nanming Lake in Lishui, east China's Zhejiang Province, from Nov. 2 to 6.

It was joined by over 1,000 people from the Chinese national rowing teams and 23 teams from Beijing, Shanghai, Zhejiang, and Guangdong, among others.

Divided into three groups, nearly 800 athletes competed in the event on more than 300 boats for 31 gold medals.

"The Nanming Lake has a sound environment and ecology. It is surrounded by beautiful paths and is well landscaped. It's a pleasure to train and compete here," said an athlete joining the championships.

A staff member from the referee group noted that the broad Nanming Lake enjoys advantages in hosting rowing games as it is able to accommodate straight and wide tracks.

Rowing has become more and more popular in China over the past few years. It must be conducted on water courses 2 kilometers long, twice as long as those for kayaking.

Lishui is a mountainous city that enjoys rich water resources. It is crossed by a number of rivers such as the Qiantang River, the Oujiang River, and the Feiyun River. The Nanming Lake covers an area of 5.6 square kilometers. Enjoying a monsoon-influenced subtropical oceanic climate, the city boasts warm winter and early spring. It's a great training base for rowing athletes.

Not many rowing fields are located in a downtown area like the Nanming Lake is. The beautiful scenery around the lake has made the sport more attractive.

The last two game days of the National Rowing Championships 2022 happened to be on the weekend, so many Lishui residents went to the Nanming Lake to watch the competition and cheer for the athletes.

The perfect blending of natural scenery and the charm of sports is why Lishui can be a host of so many water sports events.

"By holding sports events, we are aiming at not only improving athletes' performance but also bringing sports closer to the people," said Tong Lixin, head of the aquatic sports management center under the General Administration of Sport.

Lishui is endowed with a sound ecological environment, but such an environment couldn't have been maintained without the city's ceaseless efforts to advance water conservation and greening.

For the past 18 years, Lishui has ranked first in Zhejiang Province in terms of ecological environment. According to statistics, in 2021, surface water sampled at all sections monitored by the city reached Level I, II, or III standards, and water quality at all cross-administrative region sections met standards. Besides, all centralized drinking water sources at the county level and above reported standard-compliant water quality.

Relying on its natural features, Lishui has explored a path of coordinated development for nature, sports and residents. In the next few years, the city will build a national-level training base for aquatic sports and make itself a bigger name by combining its natural advantages with aquatic sports.