Jakarta-Bandung High-Speed Railway a symbol of friendship between China, Indonesia 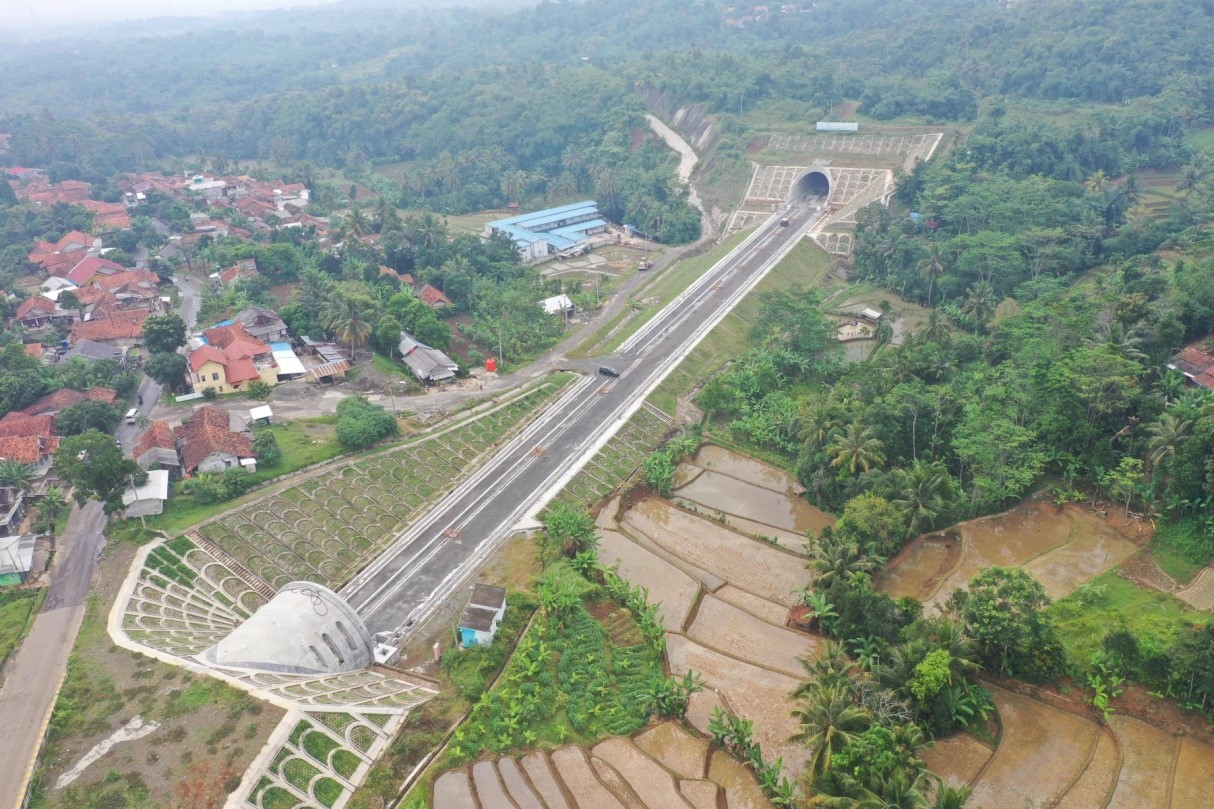 Tunnel No. 6, the longest tunnel of the Jakarta-Bandung High-Speed Railway is completed, Feb. 18, 2022. (Photo by China Railway No. 3 Engineering Group Co., Ltd.)

It was the first time that the Chinese-made Electric Multiple Units (EMUs) appeared on the Jakarta-Bandung HSR track.

The Jakarta-Bandung HSR connects Indonesia's capital Jakarta and the country's fourth-largest city Bandung. It is the first HSR in Southeast Asia.

Under the promotion of the two heads of state from China and Indonesia, the Jakarta-Bandung HSR has continuously made major progress.

As a landmark project of high-quality cooperation between China and Jakarta under the China-proposed Belt and Road Initiative (BRI), the Jakarta-Bandung HSR vividly explains the rich connotation of the vision of building a China-Indonesia community with a shared future.

The railway extends 142 kilometers with a design speed of 350 kilometers per hour. It is in effect the first overseas construction project that fully uses Chinese railway systems, technology and industrial components. The HSR is expected to shorten the trip between Jakarta and Bandung to just 40 minutes from over three hours.

In April 2015, Chinese President Xi Jinping and his Indonesian counterpart Joko Widodo witnessed the signing of deals on HSR cooperation between the two countries in Jakarta. A year later, the Jakarta-Bandung HSR project officially kicked off.

So far, all 13 tunnels and 58 bridges on the HSR have been completed, and a 14-km-long trial section has been ready for operating EMU trains.

Widodo has paid multiple visits to construction sites of the Jakarta-Bandung HSR. Last month, when visiting the Tegalluar station, he said that the smooth progress of the project reflected the sound cooperation between Indonesia and China.

The Jakarta-Bandung HSR, to be integrated with ports or airports, will become a part of the international connectivity network, he noted.

In July this year, track-laying was started on the main line of the Jakarta-Bandung HSR by the Chinese-made machine CPG500. The machine could pave 500-meter-long rails weighing 30 tons, laying 360- kilogram crossties under the rail every 60 centimeters. With the machine, 1.5 kilometers of tracks could be completed on a daily basis.

"It was the first application of this technology in Southeast Asia," he noted, adding he was proud of and grateful for the use of this high technology in the construction of the Jakarta-Bandung HSR.

"The Jakarta-Bandung HSR will significantly boost the flow of people, cargos and services along the route. Crossing nine counties and cities, it will help form new business districts near train stations and drive regional economic development," said Fajar B. Hirawan, head of the Department of Economics at the Centre for Strategic and International Studies of Indonesia.

He believes the Jakarta-Bandung HSR will accelerate Indonesia's steps toward its economic development goals.

Luhut B. Pandjaitan, Coordinating Minister for Maritime Affairs and Investment of Indonesia told People's Daily that the Jakarta-Bandung HSR is an important part of Indonesia's modern public transport system and has been listed as a national strategic construction project. It will place a positive impact on Indonesia's economy, society and people's wellbeing in a sustainable manner, he added.

"China and Indonesia have constantly enhanced their mutual trust during the construction of the Jakarta-Bandung HSR," said Hanggoro Budi Wiryawan, Former President Director of the Board of Kereta Cepat Indonesia China (KCIC).

Local people would always associate the Jakarta-Bandung HSR with Indonesia's development speed, and they are very friendly to the Chinese government and people that offer help to them, Hanggoro said.

"There are heated discussions in Indonesia that the country would build a high-speed railway network that runs through the entire Java Island," Hanggoro added.

Hanggoro considered the Jakarta-Bandung HSR as a railway to development and prosperity. He said the project has not only brought to Indonesia much-needed foreign investment, but also fostered a batch of local technical and management personnel, promoting the rapid development of the infrastructure sector in Indonesia.