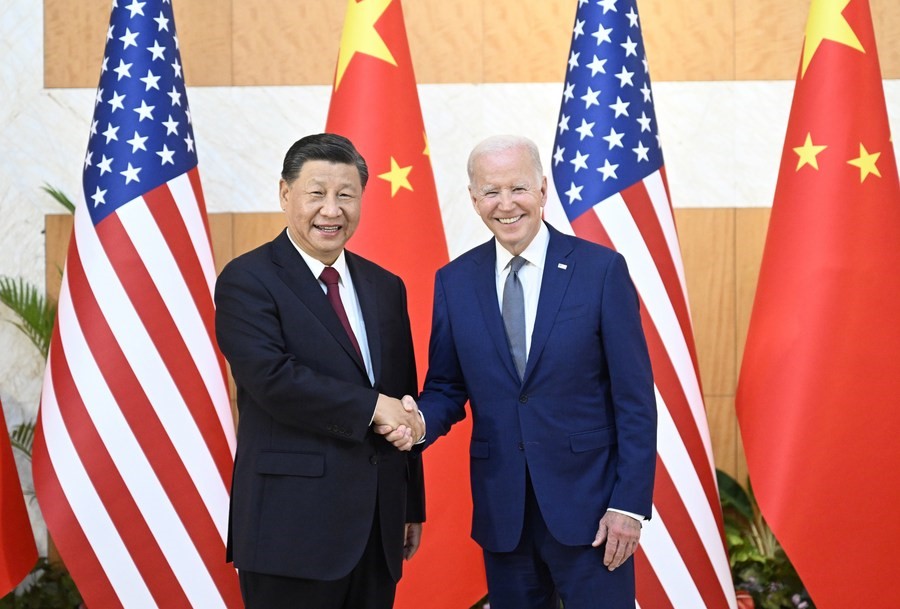 The two heads of state had an in-depth exchange of views on issues of strategic importance in China-U.S. relations and on major global and regional issues.

Head-of-state diplomacy is the compass and anchor of China-U.S. relations, and it plays an irreplaceable strategic role in guiding the growth of the relationship.

The meeting was very important. It featured three "firsts" for the two leaders - the first face-to-face meeting between Xi and his U.S. counterpart over the past three years, their first face-to-face summit since President Biden took office, and their first interaction after China and the U.S. completed their respective major domestic agendas this year. It was closely watched by the international community.

Their exchanges were comprehensive, profound, and candid, as well as constructive and of strategic importance. The meeting covered the most important aspects of the bilateral relations and the most pressing regional and global issues at the moment.

It has achieved the intended purpose of having in-depth communication, clarifying intentions, making clear where the red lines are, preventing conflicts, setting the direction, and exploring cooperation.

As two major countries, China and the U.S. should enhance their sense of responsibility when handling their relationship, which helps prevent China-U.S. relations from getting derailed or out of control and helps the two countries play their due roles in coping with global challenges.

The world is at a major inflection point in history. Countries need to both tackle unprecedented challenges and seize unprecedented opportunities. This is the larger context in which China and the U.S. should view and handle their relations.

Xi stressed that China and the U.S. need to have a sense of responsibility for history, for the world and for the people, explore the right way to get along with each other in the new era, put the relationship on the right course, and bring it back to the track of healthy and stable growth to the benefit of the two countries and the world as a whole.

Biden said the U.S. and China have a shared responsibility to show the world that they can manage their differences, and avoid and prevent misunderstandings and misperceptions or fierce competition from veering into confrontation or conflict.

Both the history and reality of China-U.S. relations show that forming a correct perception of each other's domestic and foreign policies and strategic intentions is a precondition for the two countries to handle their relations well.

The domestic and foreign policies of the Communist Party of China and the Chinese government are open and transparent, with clearly stated and transparent strategic intentions and great continuity and stability.

China is advancing the rejuvenation of the Chinese nation on all fronts through a Chinese path to modernization, which heralds bright prospects of development and brings opportunities to the rest of the world.

It would be problematic if two major countries like China and the U.S. do not have overarching principled common understandings. Only with principles can there be a direction, and only with a direction can the two sides properly handle differences and expand cooperation. It is exactly out of this consideration that the Chinese side proposed that China and the U.S. should respect each other, coexist in peace, and pursue win-win cooperation, to ensure that their relations move forward on the right course without losing direction or speed, still less having a collision.

China always believes that China-U.S. relations should not be a zero-sum game where one side out-competes or thrives at the expense of the other. The successes of China and the U.S. are opportunities, not challenges, for each other. The world is big enough for the two countries to develop themselves and prosper together. Under the current circumstances, China and the U.S. share more, not less, common interests. It is in their mutual and fundamental interest to prevent conflict and confrontation and achieve peaceful coexistence. The two sides need to respect each other, pursue mutual benefit, focus on the larger picture, and nurture a sound atmosphere and stable relations for cooperation.

The U.S. side should put into practice the "five noes" (i.e., not seek a new Cold War; not seek to change China's system; the revitalization of its alliances is not against China; not support "Taiwan independence"; not look for conflict with China) proposed by President Biden, and fulfill its commitment not to seek decoupling from China, not to halt China’s economic development, and not to contain China.

As Xi said, observing the basic norms of international relations and the three Sino-U.S. joint communiques is vitally important for the two sides to manage differences and disagreements and prevent confrontation and conflict; indeed, it is the most important guardrail and safety net for China-U.S. relations.

Resolving the Taiwan question is a matter for the Chinese and China's internal affair. China urges the U.S. side to match its words with action, abide by the one-China principle and the three China-U.S. joint communiques, fulfill its commitment of "not supporting 'Taiwan independence'", stop fudging and hollowing out the one-China policy, restrain and stop "Taiwan independence" separatist rhetoric and activities, and prevent the situation from moving to a point of no return.

On issues of democracy and human rights, and social systems and paths, China and the U.S. must respect each other and avoid ideological confrontation and bloc confrontation. It represents the trend of the times and the common aspiration of the international community.

China-U.S. economic and trade relations benefit both sides. Starting a trade war or a technology war, building walls and barriers, and pushing for decoupling and severing supply chains run counter to the principles of market economy and undermine international trade rules. Such attempts serve no one's interests.

The Chinese nation has the proud tradition of standing up for itself. Any suppression and containment will only strengthen the will and boost the morale of the Chinese people.

China has its own principles and red lines that it has long upheld, and has legitimate and lawful interests that must be firmly protected. China will not yield to any acts of hegemonism or bullying.

Managing and stabilizing China-U.S. relations is an ongoing process to which there's no end. The Bali meeting will not only provide important, practical guidance for China-U.S. relations at the current stage, but will also have a major and far-reaching impact on the relationship in the next stage and even beyond.

In accordance with the priorities identified by the two heads of state, the two teams will maintain dialogue and communication, manage tensions and differences, and advance exchanges and cooperation, so as to add positive energy and a safety valve to China-U.S. relations, and bring about stability and certainty to this turbulent and changing world.