China, Indonesia support each other on journeys ahead as companions 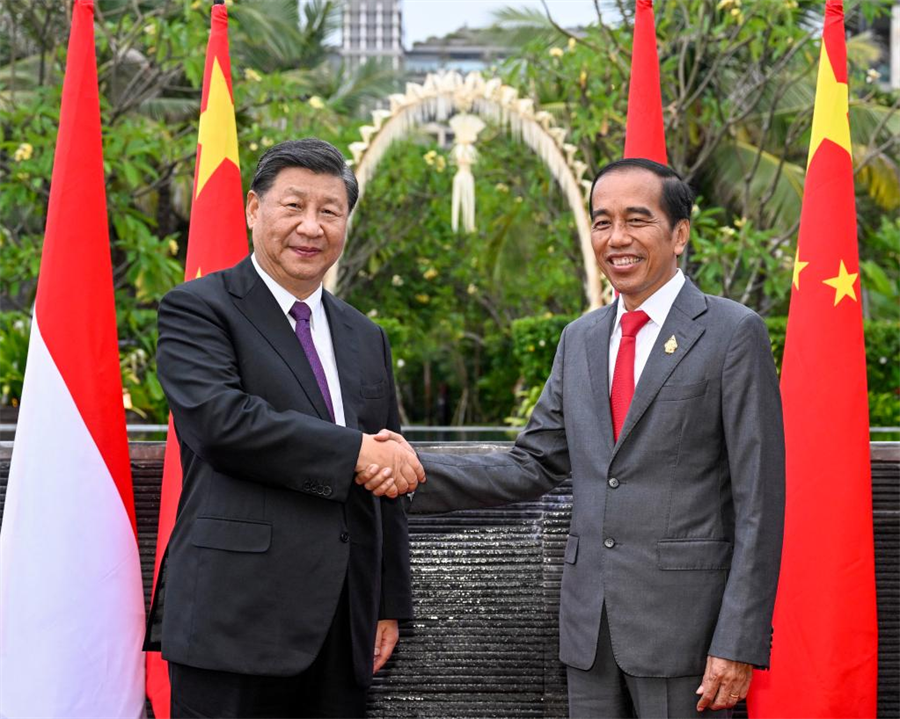 The two presidents agreed to take the 10th anniversary of the establishment of the comprehensive strategic partnership between the two countries next year as an opportunity to open up new prospects for high-level cooperation.

The two heads of state guide the stable development of China-Indonesia relations from a strategic and long-term view. This will better benefit the two peoples and make greater contributions to world peace, cooperation and development.

Guided by the two Presidents, China-Indonesia relations have embraced prosperous development over the recent years, demonstrating strong resilience and vitality.

In July this year, Widodo paid a visit to China, during which he and Xi decided on the overall direction of building a China-Indonesia community with a shared future.

In Bali this time, they both agreed that the two sides will strive towards building a China-Indonesia community with a shared future through sustaining traditional values rooted in the Chinese civilization such as "good-neighborliness" and "seeking harmony while reserving differences" as well as Indonesia's tradition of "gotong royong" and concept of "Bhinneka Tunggal Ika", and observing the purposes and principles of the UN Charter, the Five Principles of Peaceful Co-existence and the Bandung Spirit, forging an exemplary model of major developing countries seeking mutual respect, mutual benefit, win-win results, justice, equity, common development and South-South cooperation. This has further enriched the connotation of the bilateral relations between the two countries.

The two sides have formulated a Plan of Action for Strengthening the Comprehensive Strategic Partnership between the People’s Republic of China and the Republic of Indonesia (2022-2026), so as to provide integrated plans and roadmaps for their exchanges and cooperation in all areas in the next five years. The plan will help deepen the comprehensive strategic partnership between the two countries and help build a China-Indonesia community with a shared future.

Xi and Widodo watched the operational trial of the Jakarta-Bandung High-speed Railway (HSR) through video link and a video presentation on the achievements of China-Indonesia cooperation.

As a flagship infrastructure project of China-Indonesia cooperation under the synergy of China's Belt and Road Initiative (BRI) and Indonesia's Global Maritime Fulcrum (GMF), the Jakarta-Bandung HSR has become a symbol of China-Indonesia friendship and a pride shared by the two countries.

It is the first HSR in Southeast Asia, and upon completion, it will slash the traveling time between Jakarta and Bandung to just 40 minutes from over three hours. Once put into operation, the railway will speed up and improve the mobility of people and goods, and new economic growth drives will emerge in Jakarta and Bandung.

Both China and Indonesia uphold the philosophy of seeking people-centered development. They share common ideas, interests and a closely connected future.

By enhancing experience sharing in governance at a higher level and advancing modernization through joint efforts, the two countries will better promote well-beings for their peoples.

China and Indonesia agreed to carry forward high-quality projects under the synergy of the BRI and GMF and build on more flagship projects such as the Regional Comprehensive Economic Corridor and the “Two Countries, Twin Parks”.

By focusing on the cooperation on poverty reduction, rural revitalization, food security and development-oriented financing and building signature projects of the GDI, China and Indonesia will contribute to stronger, greener and healthier global development and foster a more just and equitable global governance system.

Indonesia will hold the ASEAN rotating chairmanship next year. The two sides will implement the consensus reached on the China-ASEAN Special Summit to Commemorate the 30th Anniversary of China-ASEAN Dialogue Relations, uphold open regionalism, and advance the China-ASEAN Comprehensive Strategic Partnership. This is conducive to building a peaceful, safe and secure, prosperous, beautiful and amicable home together and to building a closer China-ASEAN community with a shared future.

China and Indonesia joining hands and supporting each other on the journeys ahead is what the two peoples desire and conforms to the general trend of history. The two countries will keep enhancing solidarity and cooperation and make ceaseless efforts to strive towards building a China-Indonesia community with a shared future.