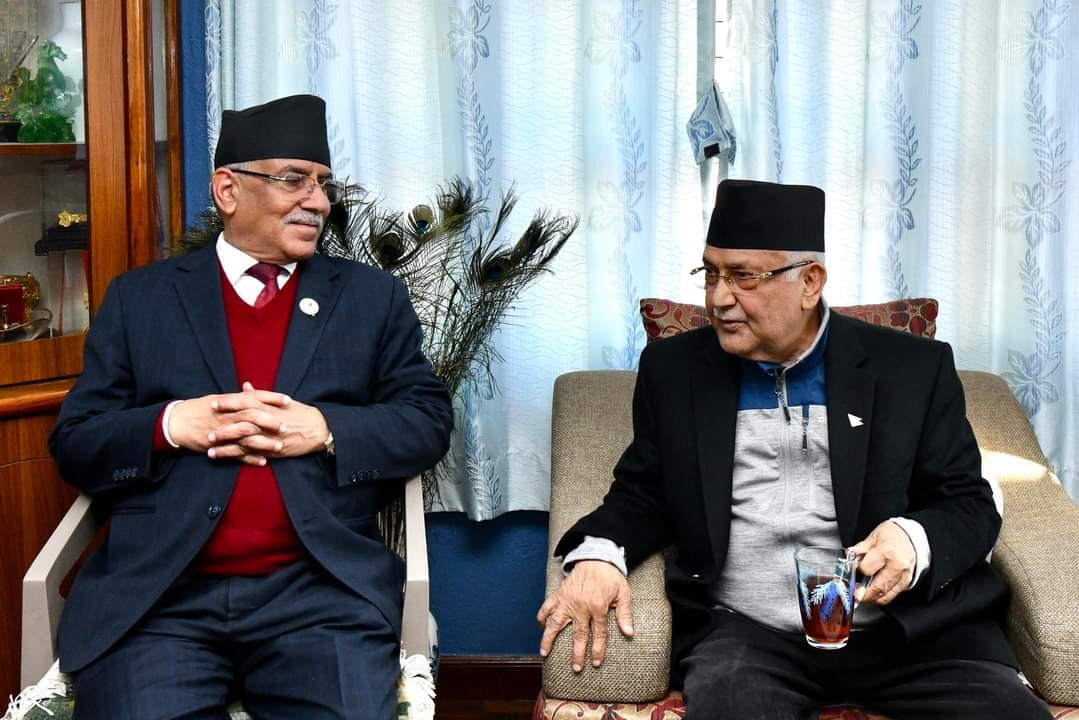 Christmas Day ushered in a surprise for Nepali people when the incumbent coalition broke down and an altogether new government has been formed.

Nepal Congress (NC), the biggest party after the general elections, was all set to form a new government with support from the existing coalition partners CPN-Maoist Centre (MC), CPN-Unified Socialist and other small parties. But things turned so ugly between NC President and outgoing PM Sher Bahadur Deuba and MC Chairman and new PM Pushpa Kamal Dahal "Prachanda" that their "coalition till ages" unravelled.

Deuba has to shoulder the responsibility for this fiasco. In course of five hours on Sunday, he lost everything right from the post of PM to forming governments in seven provinces. Breaking the gentlemen's agreement with Prachanda, the NC President remained adamant in clinging to the post of PM for the first two and half years while offering assurances that he will facilitate Prachanda's ascendence to power after that period.

Prachanda saw through Deuba's ruse and stuck to his demand. He didn't accede to Deuba's stance that NC would keep the post of PM and President while giving Speaker of the parliament and Deputy President to MC. When the talks between these top leaders reached an impasse, Prachanda stormed out of PM residence Baluwatar and went to CPN-UML Chairman KP Sharma Oli's residence.

Deuba has to shoulder the responsibility for this fiasco.

Actually, Prachanda is key to the formation of any government with 32 seats in the new parliament. The top two parties NC and UML cannot form a government without taking MC on board. This arithmetic works not only in the federal government but also in the provinces. In this sense, both Oli and Deuba were advancing their moves and countermoves keeping Prachanda in centre. Ultimately, Oli trumped Deuba in the political chess with some shrewd moves.

Trickery and backstabbing are accepted conducts in politics. Oli used both these weapons in forcing Deuba to step down from power. It was revealed later that Oli had assured Deuba of giving his support to form the government to keep Prachanda in size (as he is known to be a destabilizer). However, it would have flouted the established parliamentary norms. Generally, the first and the second biggest parties in the parliament don't join hands to form a government.

But Oli had hoodwinked Deuba. On the outward, Oli had been saying that Prachanda can never be the PM. Deuba knew that Oli had already started talks with Prachanda through second-layer leaders in both UML and MC but was still hoping of securing Oli's support.

Especially, Deputy Secretary General Barshaman Pun of MC and Deputy Chairman Bishnu Poudel of UML had been in conversation ever since the results of the general elections were out. Also, it is said that Pun was advised to work for communist alliance (leading to unity) during his health treatment in China.

Election results provided the fertile ground for talks between UML and Maoist leaders as the latter were unhappy with the electoral alliance with NC. They concluded that enough votes were not transferred to MC from NC voters. They were right to claim that NC became the largest party in the parliament on the basis of MC and coalition partners' votes but NC didn't return the favour. Therefore, they were all for talks with UML even though Prachanda didn't want to leave Deuba.

But Deuba had other things in mind. Even till the last moment Deuba was confident of Oli's support if Prachanda decided to leave him. He had even phoned Oli after Prachanda hurried out of Baluwatar. Oli didn't give a clear answer to Deuba. When Deuba phoned Prachanda while the latter was in Oli's residence, Prachnada took the call to say that things had gone too far and it was a point of no return.

Why was Deuba so adamant in clinging to the post of PM when he knew well that this move would break the coalition? It was learnt later that leaders close to Deuba had incited him to take a firm stance. Especially, Bimalendra Nidhi had assured Deuba that he would get India's support if he remained the PM. Deuba's wife Arzu must have argued along similar lines as she has been constantly flaunting her ties with leaders of the ruling Bharatiya Janata Party. They also told Deuba that there is no point in allowing the leader of the third largest party to become the PM.

Actually, the wrong advice of Deuba's kitchen cabinet and his own arrogance has caused his party immense harm. It is said that he had stopped listening to dissenting voices in the party who were suggesting him to make way for Prachanda to save the coalition. This ill-advised move has backfired for NC which is completely out of the corridors of power.

Oli is the clear winner in this game of thrones. He was roundly criticized for facilitating the break up of Nepal Communist Party (formed with the merger of UML and MC) and squandering a golden opportunity of continuing to lead a government that enjoyed almost two-third majority. With the patch up between Oli and Prachanda, revival of NCP is also on cards.

It is believed that both Oli and Prachanda have become wiser from the earlier bitter experience.

It is believed that both Oli and Prachanda have become wiser from the earlier bitter experience. Prachanda wanted to become the PM and has got his wish with Oli's goodwill. So, he will remain in deference to Oli who will also not provoke Prachanda unnecessarily as he needs Prachanda's backing for the next two and half years in power. Both these leaders have agreed to share the tenure for half the period.

But nothing can be predicted in Nepali politics with confidence. If things go south with Oli and Prachanda, Deuba may still get a chance to lead the government before the next elections.

That said, the current coalition needs to go far for the sake of ideological polarization in politics. The big communist parties have come together to form a leftist-led government. This development should force NC to build a centre-right coalition with ideologically similar parties.