Longevity of Dahal Government in doubt 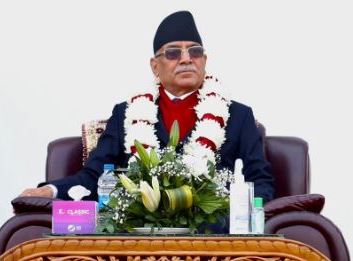 If there is anything predictable about Nepali politics then it must be its unpredictability. Political instability or rather uncertainty has been a defining feature of Nepali politics. Even before the government headed by Pushpa Kamal Dahal aka Prachanda takes a fuller shape, questions are raised over its longevity. How long will it survive? When will it come to an end?

Media reported that there is a gentlemen’s agreement between PM Dahal and CPN-UML Chairman KP Sharma Oli to evenly split five-year tenure on a rotational basis. But there are doubts – lingering doubts – that PM Dahal will ever survive 2.5 years. Some political analysts are already talking about snap polls. Given the state of the economy, it will be a disaster for the country to go for another round of polls so soon.

PM Dahal failing to garner vote of confidence may be an exaggeration. He already holds 169 signatures, way above required threshold of 138 votes. But past events have shown that anything can happen in Nepal. In a country where MPs openly flout party whips and easily cross floor, there is no guarantee that coalition partners will vote in his favour.

In a country where MPs openly flout party whips and easily cross floor, there is no guarantee that coalition partners will vote in his favour.

At the other extreme, if you listen to defecting NC leader, Amaresh Singh, PM Dahal will survive 2.5  years easily and then hand over power to Oli. However, speaking at the press meet, NC Spokesman, Prakash Sharan Mahat opined that Dahal Government will have “a short life”. Based on these views and opinions, one can fairly predict the life of Dahal Government to be from a minimum of 30 days to a maximum of 2.5 years.

Vote of Confidence and Vote of No-Confidence

The longevity issue has been raised primarily because Dahal Government is an outcome of wobbling, ragtag coalition of seven political parties. In the camp one can find monarchists and republicans, seculars and pro-Hindus, federalists and anti-federalists, rightists and leftists, coming together to bag plum posts and hold onto power. The partners hold numerous, divergent and antagonistic agendas. It will be a herculean task for PM Dahal to satisfy them all.

It will be interesting to read common minimum programme of the coalition government. So far, Rastriya Prajatantra Party (RPP) and Janata Samajwadi Party (JSP) have refrained from joining government, extending external support until they are sure of the common minimum programme. Rastriya Swatantra Party (RSP) is demanding as many as three ministries. Nagarik Unmukti Party is not joining the government unless their jailed leader Resham Chaudhary is freed. All these demands and positions put PM Dahal in a shaky position.

With the entry RSP leader Rabi Lamechhane as Deputy Prime Minister holding a powerful ministry like Home Affairs, it is reported in the media that senior leaders from both CPN-UML and the Maoist Party are shying away from joining the government. Nepali society is intensely hierarchical and status conscious. Remember JSP demanding “a respectable position” in the Cabinet. There is rumour in the market that PM Dahal is going to see off Lamichhane once vote of confidence is secured. This could be another disaster in making. The pending court cases related to Lamichhane’s citizenship and passport may trigger political disaster.

It will be a suicidal move for PM Dahal to survive if he offends India. His official visit to India or, for that matter, China makes a difference in his tenure.

So far KP Sharma Oli has remained calm and quiet, generously handing over power to the Maoists in a silver platter. His shrewd move commonly dubbed as Olitics-politics, has helped to disrupt five party alliance that had sought to alienate his party during elections. To that point, he has been successful. Once the seats of President, Vice President, Speaker and provincial Chief Ministers are allocated among coalition partners, Oli is expected to make his grand entry. In the face of non-performing Dahal Government, definitely, he will not keep quiet. He will present himself as an ultimate saviour – the hero.

Besides internal politics, the government’s longevity is also determined by external factors. So far, in order to neutralize Chinese influence, PM Dahal has expressed that his government will take a pro-Nepali instead of pro-China, pro-India or pro-US stand. In a way, this coalition presents a “nationalistic front”. The problem with nationalists in Nepal is that the term is often defined as anti-India stance. It will be a suicidal move for PM Dahal to survive if he offends India. His official visit to India or, for that matter, China makes a difference in his tenure.

A Twitter user wrote, “A wounded lion is far more dangerous than a normal one”. Sher Bhadur Deuba, whose name's literal translation stands for a “brave lion”, is not expected to spend time licking wounds. The unholy alliance between Oli-Dahal remain successful only on two counts: First, if it can wedge a formal split within Nepali Congress Party or second, it can regenerate unity amongst communist forces in Nepal. I see little chance in achieving both of these goals.