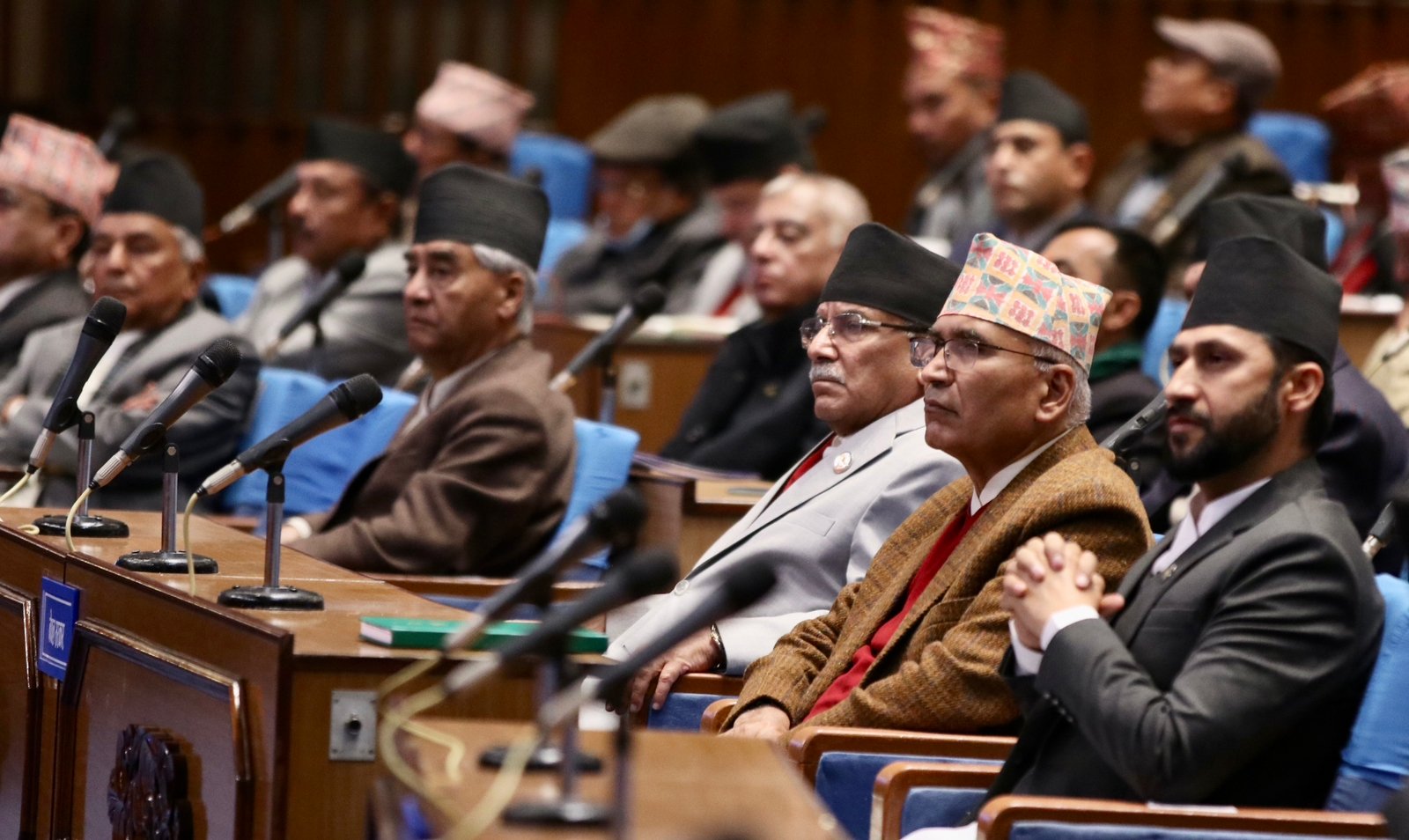 Nepali politics continues to throw surprises on a regular basis. On Christmas Day, CPN-Maoist Centre Supremo Pushpa Kamal Dahal "Prachanda" took the oath of office as the prime minister by breaking the existing coalition with Nepali Congress (NC) and shaking hands with CPN-UML. Now on 10 January, Prachanda has achieved the impossible by securing 268 Members of Parliament (MP) votes with just two in opposition.

Many people were sceptical about Prachanda even getting the required number of votes to keep premiership intact. Grapevine had it that coalition partners Rastriya Prajatantra Party and Janata Samajwadi Party would back out at the last minute or MPs belonging to those parties may cross the floor. But PM Prachanda became confident in the extension of his tenure when the erstwhile partner NC decided to reward him with vote of confidence so that he does not stray too far away towards the communist front.

Internal as well as external factors have contributed to this bizarre outcome. NC President Sher Bahadur Deuba realized that Prachanda and Oli's handshake would put his party forever out of power. The manner in which Oli had started to dictate terms for the new alliance caused worry in NC circle about his intentions. NC leader Prakash Sharan Mahat said that Oli might attack the Constitution once again with his newfound power. The seating arrangement in government secretariat Singha Durbar in which Oli appeared above in protocol than PM Prachanda gave ominous signal that Oli's totalitarian tendencies must be rising once again. Hence, NC top brass came to the conclusion that giving Prachanda vote of confidence will keep Oli in size.

UML on the other hand sees this NC move as an effort to sow discord between Maoist Centre and UML. Oli said earlier that the current government is "Made in Nepal" hinting at the failure of the southern neighbour to stop communist alliance. Secret meetings of Indian spooks with Nepali leaders bore no fruit when Prachanda embraced Oli. UML leaders think that India asked NC to back Prachanda to give the message that geopolitics is still in play. Even they must be thinking that with NC's support to the government, Oli will not have huge leverage over Prachanda.

India was embarrassed with the break up of NC-Maoist coalition. It was said that the Indian government had taken Ambassador and the intelligence chief to task for failing to prevent Prachanda from shakig hands with Oli. A course correction had to be made soon. Now that NC and Loktantrik Samajwadi Party is also backing Prachanda, the Indians seem to hope that the communists will not run amok like in the past when UML-Maoist merged to become Nepal Communist Party giving China the upper hand.

PM Prachanda also must be happy with this overwhelming support. Now he can keep both NC and UML in check. Ideally speaking, this development has provided him with the golden opportunity to usher in good governance and carry out development tasks in war footing. He has shown some positive signs by opting to take oath in national attire and issuing directives to civil servants to focus on smooth service delivery. It appears that he has ditched romantic revolutionary thinking to become a pragmatic statesman. History has given him an opportunity to correct errors made in the past.

More than 99 percent of votes for the PM is a clear message that the parliament will not have a strong opposition. NC has said that it will not join the government even if it has voted for Prachanda. But this commitment makes no sense as NC cannot meaningfully oppose the wrong actions of the government.

But Prachanda's hope for smooth government functioning is premature because the current coalition consists of parties with polar opposite ideologies. Too many cooks can spoil the broth. The country could be heading to snap elections in two years. Even Prachanda's hedging tactics between UML and NC will fall flat after the election of President and Speaker as he will be compelled to choose one or the other for the rewarding of plum posts.

In fact, this whole episode has made a mockery of parliamentary practice. More than 99 percent of votes for the PM is a clear message that the parliament will not have a strong opposition. NC has said that it will not join the government even if it has voted for Prachanda. But this commitment makes no sense as NC cannot meaningfully oppose the wrong actions of the government.

Actually, NC has not backed Prachanda with expectations that a national consensus government will be in place and the head of that government will facilitate economic growth and prosperity. NC only wants to please Maoist party so that it can return to power at the earliest. Clinging to power by hook or by crook and sharing the spoils is the philosophy of all the political parties in Nepal.

NC and CPN-Unified Socialist leaders say that they support Prachanda government to save the Constitution but this argument holds no water. Rather their move has destroyed the spirit of the Constitution. The Statute bats for a responsible and accountable government as well as a strong opposition.

Standing as the chief opposition party would have established NC as a responsible party but it has squandered the opportunity. NC has plunged the lower depths in previous occasions as well but this is a new low for them. Well, expecting morality and good conduct from political parties in Nepal is foolish.