Are we poised for Jana Andolan III? 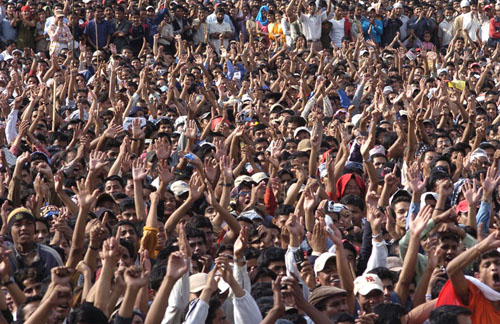 On 20 December, with the PM’s recommendation to dissolve the Parliament and hold early elections on 30 April and 10 May and meek endorsement of the same by the President has created a political whirlwind in the country. Intra-party quibbling brewing within the Nepal Communist Party (NCP) has come to a boiling point.

It is a sheer irony that a government claimed to have almost two-third majority, elected for a five-year term, and working towards “prosperous Nepal and happy Nepali” has to face an unceremonious end that too, at the middle of the road, brought about by intra-party feud. The unfolding of the events, once again proved that the enemy within is far more dangerous than the enemy outside.

Jana Andolan I and II

In the recent political history of Nepal, we have seen two rounds of people’s movement effecting regime change. In the first round (Jana Andolan I) in 1990s, the country switched from a near autocratic monarchy-led one party political system to a multiparty democracy with the king as a figurehead. In the second round (Jana Andolan II) in 2006/7, the country abolished monarchy and laid grounds for a federal democratic republic Nepal.

The background or contextual materials do provide some clues to predict whether we are poised for Jana Andolan III. The first people’s movement took place at a time when Soviet empire was crumbling and German unification was taking place; there was a kind of global movement for liberal democratic values.

Internally, Nepali people were sick and tired of nearly 30 years of monarchy-led one party regime called Panchayat System. Much divided and disarrayed political parties, hitherto operating underground, got unified to wage a mass movement. Nearly 18 month long blockade by India helped to fuel the political fire burning inside Nepal. The then King Birendra finally had no options other than to bow down to public pressure. He abolished Panchayat System and reinstated multiparty democracy that was illegitimately snatched by his father in 1960.

The second people’s movement also exhibited similar backdrop. The monarchy was greatly discredited by notorious palace massacre in 2001. The royal coup by King Gyanendra provided a kind of rallying force for disarrayed and disillusioned political parties to wage a unified mass movement. The signing of 12-point agreement in New Delhi in November 2005 between the seven agitating political parties and the Maoists to launch a joint movement against the monarchy was a key turning point.

Faced with losing international support, primarily the support from India, much isolated King Gyanendra bowed down to political demands. He reinstated the dissolved parliament and it, in turn, abolished monarchy and paved way for drafting a constitution by an elected assembly. The country entered into a new phase of prolonged political transition.

With two Constituent Assembly (CA) elections and numerous changes in government the country, literally, faced a situation of political stalemate. When the first CA (2008-12) failed to draft constitution, political leaders hurriedly invited the then Chief Justice to take over the seat of the Chief Executive to hold next rounds of CA elections (2013-15). Had this void not been fulfilled in time, Nepal’s politics could have taken a different turn.

Finally, the devastating April earthquake in 2015, with donors dangling the carrots of “relief fund”, pushed ever-bickering political parties to sit down to draft the new constitution in September 2015 and hold elections at federal, provincial and local levels. Had there been no April earthquake, our politicians will still have been quarrelling on constitution drafting and extending the tenure of the CA.

Remember, India was not happy with the new constitution and merely “took notice” of its promulgation; as a result the country faced another round of unofficial blockade. The madhesis, the janajatis, dalits and other minority groups have more than enough reservations with the present constitution. In terms of time and cost involved, our constitution must be the most expensive constitution of the world. The untimely dissolution of the parliament only shows that either we have wasted our enormous efforts in drafting of the constitution or there are fundamental flaws in the constitution that need to be corrected.

PM Oli’s move to dissolve the parliament is similar to King Gyanendra’s coup preceding Jana Andolan II. As long as political parties were disunited, the King managed to keep the country. However, he lost his legitimacy once he failed to hold promised elections and moreover, his anti-corruption body was declared unconstitutional by the Apex Court. Similar to the recent last minute mediation by the team of Chinese envoys, King Gyanendra too failed to heed the last minute advice by Karan Singh – a special envoy sent by India for negotiated settlement.

As mentioned earlier, regime change is the core feature of people’s movements. If the dissolved parliament is not reinstated and if the government fails to hold elections in April/May and street demonstrations are not quelled, it will not be difficult to predict another round of people’s movement. Interestingly, the months of March-April-May are the conducive months for political agitations in Nepal.

The external environment is also rife for such a movement. With global pandemic situation and the economy in tatters, dwindling foreign aid and cooling of relationships with neighboring countries, public apathy and frustration with the political parties and their senile, sick, and mean leaders have reached a boiling point. There is now a public unanimity that we too need to get rid of Donald Trump. People are sick and tired of hawa guff or unsubstantiated airy promises.

A joint political and civil agitation against untimely dissolution of the parliament is gaining traction. So far, major political parties, with their inflated egos and super-egos, are waging public demonstrations on their own. They still have to find a rallying force.

A care-taker government, promising to hold elections in coming four months, is busy appointing henchmen in the constitutional bodies; expanding and reshuffling Cabinet members; and wasting time performing near stand-up comedies. Except PM Oli and his team, no one is sure of April/May elections. Even when all parties agree to go for elections, they have to wait till the Court comes with its verdict on parliament dissolution and the Election Commission fixes legitimacy of two cantankerous factions of the NCP. There are hosts of technical, financial, human resource constraints related to managing elections within four months. Already, the Commission is reported to have suggested for a single instead of two-phase elections.

It may sound anti-nationalist but without “green signals” from India it is near impossible to hold elections in Nepal. Can we unilaterally close more than 1,500 km long open, free and unregulated border with India during elections? Bigger the political void and uncertainty, greater the chances for people’s movement. Amid choppy political water, pro-monarchists and Hindu fanatics may salivate for a while with their “raaja aau, desh bachau” slogan. But definitely, the clock is not going to turn back for we are already into Twenty Twenty-One.