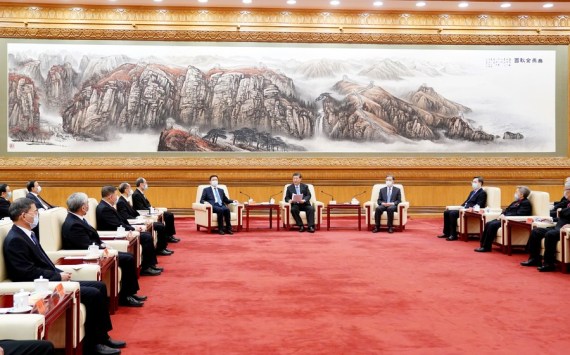 Beijing, 3 February (2021) - General Secretary of the Communist Party of China (CPC) Central Committee Xi Jinping on Monday expressed the hope that non-CPC figures will give their suggestions for the country's new development stage, philosophy and paradigm.

Xi, also Chinese president and chairman of the Central Military Commission, made the remarks in a meeting with leaders of non-Communist parties and the All-China Federation of Industry and Commerce (ACFIC), as well as public figures without party affiliation. His words and the meeting gave a glimpse of the unique form and strength of China's political system.

By listening to suggestions and recommendations and accepting criticism and scrutiny through various forms of consultation, the CPC is able to reach the broadest possible consensus on all its decisions and work. By doing so, the country can ensure that factional strife and bitter disagreement among parties and among interest groups can be avoided. It helps pool the wisdom and strength of the entire society to advance reform and development, effectively overcome any problems and ensure that essential work is not impeded by lack of consensus.

In 2020, when the country faced grave and complicated situations and tasks, non-CPC figures stayed united with the CPC, providing valuable ideas and suggestions and jointly overcoming difficulties. A united China has made major strategic achievements in containing COVID-19, taken the lead in achieving positive economic growth, accomplished the tasks of poverty eradication on time, and made historic achievements in building a moderately prosperous society in all respects.

Democracy is not a decoration but a means of solving problems. The year 2021 marks the start of the 14th Five-Year Plan. China will press ahead with the implementation of its new development philosophy highlighting the concepts of innovative, coordinated, green, open and shared development. To this end, non-CPC figures should preserve the political character of pursuing the common goal with unity and working together with the CPC.

For instance, the ACFIC can perform its duties in promoting the healthy development of the non-public sector of the economy and the people working in this sector. The professional advantages of intellectuals outside the Party can be brought into play to make new contributions to the prevention and control of the epidemic and economic and social development.

There are diverse ways to realize democracy, so the way to realize it must not be confined just to one particular rigid one. China draws on the achievements of other political civilizations, but will never blindly copy the political systems of other countries. China has built a system which, deeply rooted and fully nourished in its own soil, is trustworthy and can best serve the nation's interests.

Powered by its own model of democracy, China will realize its goal of fully building a modern socialist country with the joint efforts and wisdom of the 1.4 billion Chinese people.