What ails the CIAA? 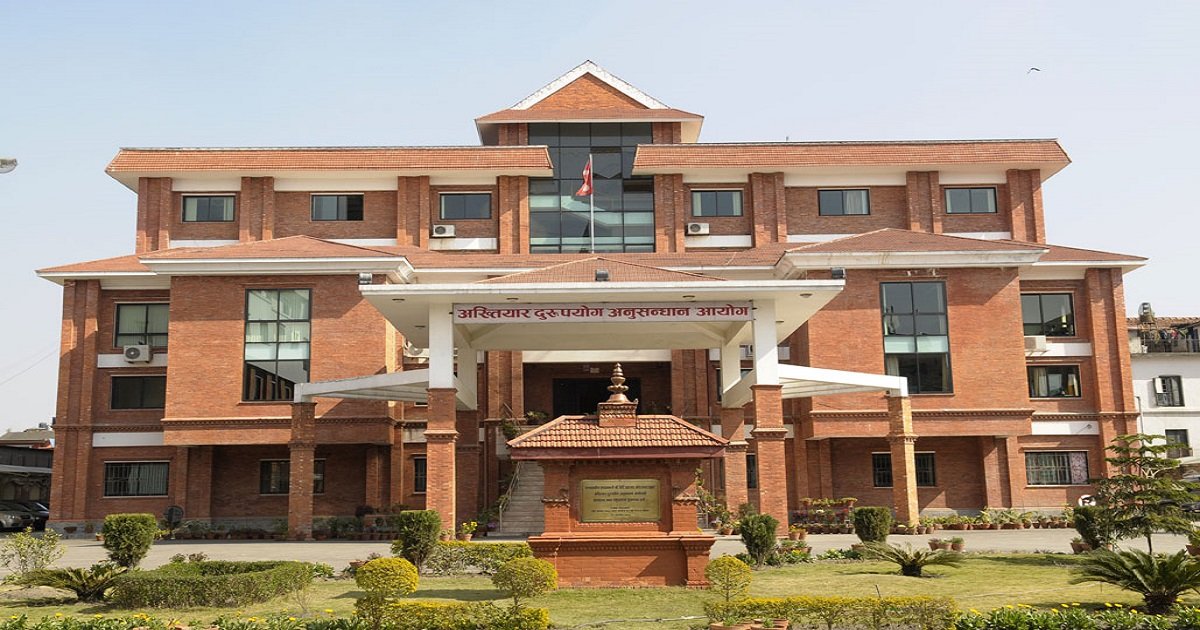 The newly appointed chief of the Commission for Investigation of Abuse of Authority (CIAA) Prem Kumar Rai is reported to have said that his first job will be to restore the glory of the institution. What he meant by the glory of the CIAA is still unclear when his very appointment, along with that of others, is being questioned both at the Court and by the public.

And the CIAA, the constitutional anti-graft agency has become one of the highly politicized agencies in Nepal. His appointment has also led to the resignation by one of the commissioners. These days, the phrase “political setting” is very much in the air. Actually, in the world of anti-corruption, it goes by the name of “state capture”. By forcefully making appointments in the constitutional bodies, has Oli Government completed its design to capture the state? It will be interesting to watch the behaviour and performance of the CIAA in the days to come.

Corrupting an anti-corruption agency
Historically, anti-corruption bodies in Nepal have always been used as political weapons either to discipline one’s misbehaving supporters or to take revenge on the opponents. Misuse of the agency has led us to a situation where, instead of the agency controlling corruption, corruption is controlling the agency. Had this not been the case, one of the Chiefs of the CIAA would not be under custody at present or a commissioner charged of bribery.

Historically, CIAA must be one of the oldest anticorruption agencies in Asia. It is pathetic to see this agency remain docile and dormant, dragged into controversy one after the other, and now probably on the verge of collapse. This is at a time when corruption is becoming a “high growth” industry in Nepal. In fact, in a way, we have succeeded in corrupting an anti-corruption agency.

So Rai will have to be occupied cleaning the house than cleaning the government. Given the flux political situation, who knows his last hour, politically manoeuvred, appointment may turn out to be, as per Nepali saying, “marne belama hariyo kankro” or the English equivalent, last minute glowing of the candle?

Data speaks
The chart below presents the historical trend of number of corruption complaints lodged and settled at the CIAA for last 30 years (1990/91-2019/20). There could be many other indicators to judge the performance of anti-corruption agency (ACA) like the number of high profile cases handled, people being convicted, money recovered etc. One should also note that developing ACA performance indicator is a very tricky business.

However, the starting point to understand ACA performance is the number of corruption complaints lodged and settled. This simple but basic indicator has an important function. It is an indication of people’s trust in the agency, albeit we need to take it with a pinch of salt because there could be lots of fake cases registered under fake names. The rise and fall in the number of corruption complaints also reflect leadership capability, institutional twists and turns and who knows, possibly also the corruption situation in the country? 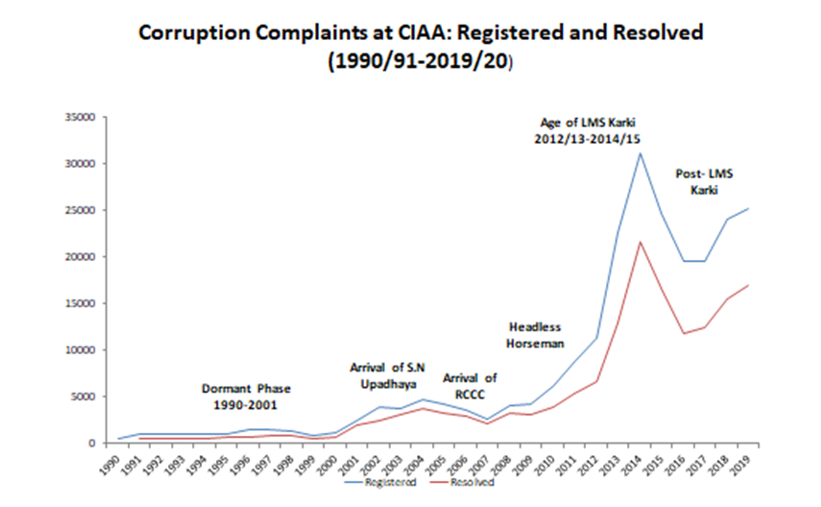 Some interesting patterns can be detected in the Chart. The CIAA has passed through several phases of ups and downs like in a rollercoaster – starting from a dormant stage in early days of formation to the arrival of Surya Nath Upadhaya in 2001/2 when new anti-corruption laws were enacted and sweeping actions taken against top-shot bureaucrats and political leaders.

With the arrival of political regression in 2005, the CIAA got obscured by the formation of unconstitutional body like Royal Commission for Corruption Control (RCCC). With the completion of the tenure of SN Upadhaya in 2006, the CIAA functioned like a headless horseman when all the commissioners got retired from the job. This is also the time when the country went into prolonged transition in the name of Constituent Assembly (CA) elections and drafting of the constitution. Politicians were little interested in controlling corruption. For them corruption is a solution, not a problem.

In a political stalemate situation, brought by the un-ceremonial demise of First CA, Lok Man Singh Karki (LMSK) got a sudden and surprising appointment as the Chief of the CIAA in 2013. It is rumoured that the second CA elections could not have taken place sans his appointment. Nepal is a funny country. There was also a rumour that first CA elections could not have taken place without infamous Sudan Scandal. I expect readers to guess what is in the offing for the up-coming elections, if it is ever going to be held.

We need to dig a bit into LMSK because the current Chief Prem Kumar Rai had an experience working under him before he got transferred to the Home Ministry. Who knows he may be following the footsteps of LMSK? The sharp rise in the chart reflects the days of LMSK at the CIAA. When the new Chief speaks of retaining the glory of the CIAA, does he mean by attending another height like this?

Definitely, LMSK fortified the agency with police officers, established regional outreaches, and used “sting operations” to the maximum. In a way he was impregnable. The problem with him was he created CIAA within a CIAA until he became everybody’s eyesore. Finally, politicians decided to show him an exit door, first, through impeachment motion in the parliament and then through the Supreme Court disqualifying his appointment. Remember, he was disqualified to be the Chief of the CIAA after more than three years in the chair.  The decision saved the House from impeachment motion.

The exit of LMSK literally made CIAA subservient to the Executive. It lost its status as a constitutionally independent agency. The day when LMSK was kicked out, it was shameful to see all the remaining commissioners huddled at PM’s Office, listening to the great advice of the PM on controlling corruption. Thereafter, we could see one controversy after other brewing within the CIAA. It will also be interesting to note when LMSK was kicked out Prachanda was in the PM’s Chair. Is he going to have taste of his own medicine? Only coming days will answer this question.

Even the appointment of Rai gives a flavour of LMSK style appointment – no public hearings plus discretely, hurriedly sworn in style of appointment. There is also a rumour that Rai is being brought in to open up some old high-profile corruption vendetta cases that have gone into deep freezer. To be specific, this is about opening up the case of “cantonment corruption”. The case of Lalita Niwas is also in the air. The Chief may be having some options in his mind but opening up cantonment files will be a joke, if not a sinister design. As far as this scribe could recall, the issue got cleared by the Cabinet decision of Dr Baburam Bhattarai Government.