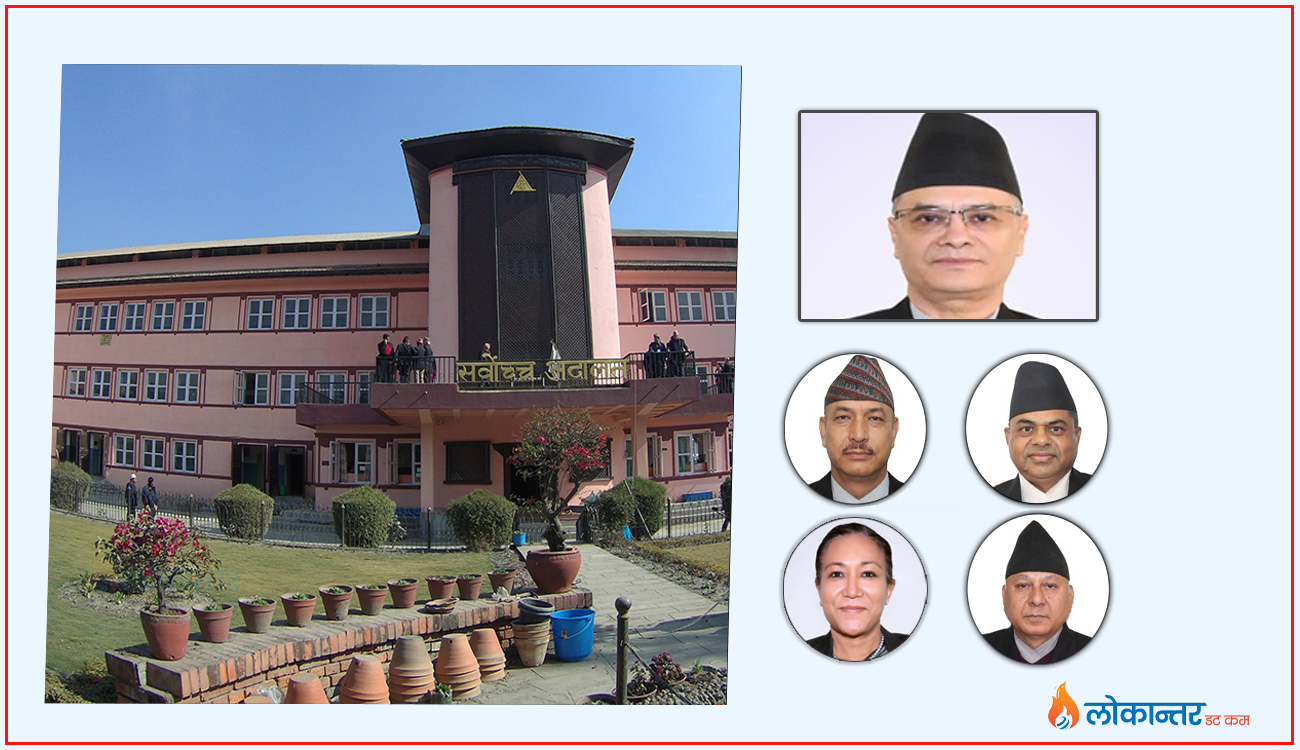 Compared to 72 lawyers that pleaded on behalf of 13 writ petitions filed at the Supreme Court against unconstitutional dissolution of the parliament, the government lined-up 188 lawyers in defence. The sitting judges at the Constitutional Bench must have been irritated by the sheer number of lawyers, making time management extremely difficult. Moreover, election dates have already scheduled to be held on 30 April and 10 May.

Fortunately, many did not turn up for their deliberations. The social media speaks of government-side lawyers drawing fees ranging from a maximum of Rs. 700,000 to a minimum of Rs. 25,000. This could also be the reason why the lawyers were interested in listing their names rather than standing for deliberations. A blogger joked, “If you listen to your heart, it will tell you the dissolution is wrong. But the fat fees force you to speak otherwise.”

Here are some basic arguments made by the government-side lawyers.

Some other lawyers argued that the rights to dissolve the parliament is an extra-ordinary power, similar to the one granted to Shree Panch Kings during Panchayat days or to Shree Teen Rana prime ministers during rana autocracy days. Some even referred to residual power as in a federal system, that is, any power not specifically written in the constitution resides with the PM. The argument also came from the lawyer representing amicus curiae that the prime minister’s prerogative is hidden inside or implied in the constitution or to be taken as an inherent power.

Closely related to the PM’s prerogative, the second argument stressed on two specific rights of the PM in a parliamentary system. These included the rights to dismiss (non-cooperative, disobeying ministers and officials) and the rights to dissolve a non-cooperative parliament. The PM simply chose the latter; otherwise, his option will be to tender resignation and go home.

Third, the government-side lawyers also argued that restoration of the parliament will help further destabilize the country. Parliament restoration is far more risky option than seeking a fresh public mandate. In a mass meeting organized at Butwal on 13 February, PM Oli himself posed a question to the opponents: What kind of democratic system are you trying to install where one is forbidden to cast votes? Inside the courtroom, some pure hypothetical questions were also raised: (1) What would happen if the PM refrains from recommending to call the restored parliament? (2) What if the PM again dissolves the restored parliament? Can a majority run government be forced to run for five years?

Fifth, the MPs belonging to NCP cannot file vote of no-confidence motion against their own government; it is only the opponents who enjoy this right. This was raised in response to no-trust motion filed in the parliament secretariat.

Finally, national and international practices were cited and reviewed to get an understanding of the PM’s rights to dissolve the parliament. An advocate must be stunned when the presiding Chief Justice posed him a question: Are there experiences where PM dissolved the parliament sans constitutional provisions? A blogger commented: This is a military style coup that frequently happens in African countries.

The five lawyers – commonly called the friends of the court- have also finished their deliberations. Interestingly, there are also five numbers of presiding judges in the Bench. Compared to the lawyers representing plaintiffs and defendants, the five amicus curiae lawyers are expected to provide more neutral, independent perspectives. Probably, this is the reason why nearly five days were allocated to the five amicus curiae lawyers.

Listening to the lawyers is like watching a football match. At the end, when game is undecided, five penalty kick outs are allowed for each team. My own scoring of the five penalty shoot outs by the five amicus curiae lawyers goes like this: “For dissolution - 1” and “Against dissolution - 4”. Let us wait and see how the five presiding judges will score. Remember, there is also a possibility of conditional outcome, that is, the parliament may be dissolved with a string attached - if no elections can be held within six months, the parliament may be restored.

Given the three possible court verdicts, i.e., dissolution, no dissolution and conditional dissolution, I have drawn here a rough fish-bone decision tree, outlining possible political scenarios or courses. As Nepal’s politics is not running in a linear fashion, I very much warn the readers to not to take it literally and call for more refined version. After all politics is all about game of possibilities. Anything can happen in Nepal. 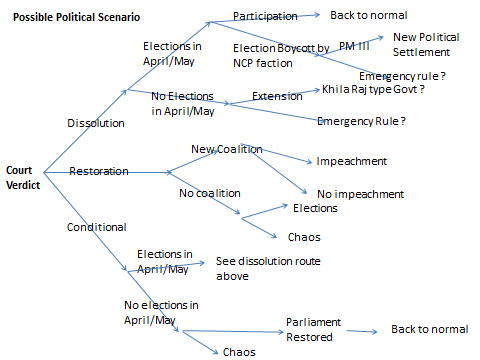