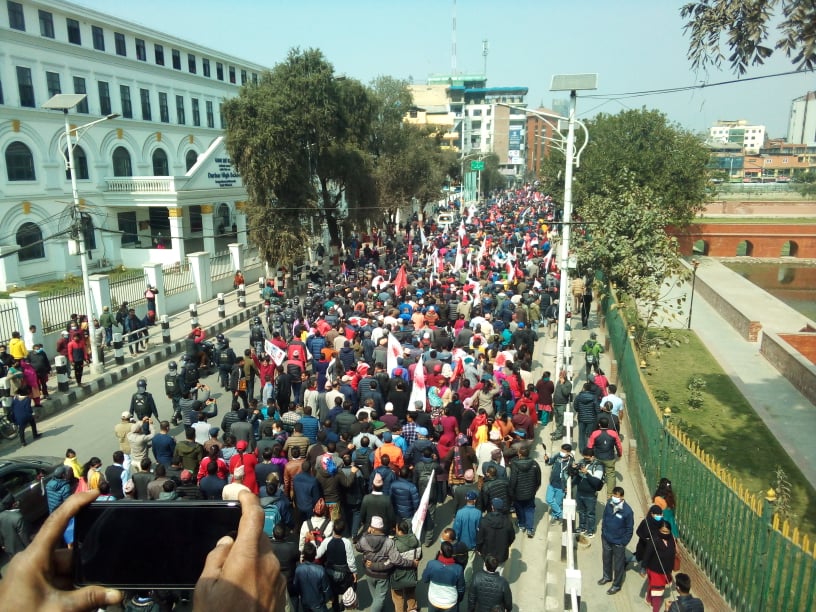 Kathmandu, 24 February (2021) - Nepal Communist Party (NCP) Dahal-Nepal Group has organised a celebration rally in the capital today after the Supreme Court reinstated the House of Representatives saying the move of dissolving the HoR was unconstitutional.

People gathered at Shantibatika expressed and shared happiness saying the SC corrected the 'unconstitutional move' of the government.

The President, at the recommendation of the government on December 20, 2020, had announced the mid-term election by dissolving the HoR.  A faction of NCP as well as different political parties had launched agitation against the government's decision.

Leaders and cadres of NCP Dahal-Nepal group gathered at Shantibatika had marched in celebratory procession through the city. NCP Standing Committee members Pampha Bhusal and Janardan Sharma, central committee member Jeevan Ram Shrestha, Himal Sharma, among others were in the rally.

An assembly was organised at Bhrikutimandap after the rally. On the occasion, leader Bhusal said, "Now the country will run from constitution. The Supreme Court has made a historical decision."

Saying now their attention would be focused to establish the best socialism of the world, she expressed commitment that they would involve to fulfill the campaign of people's justice, equality and freedom.

Bhusal extended gratitude towards all people supporting them in the nation-wide agitation against the unconstitutional move of the government.