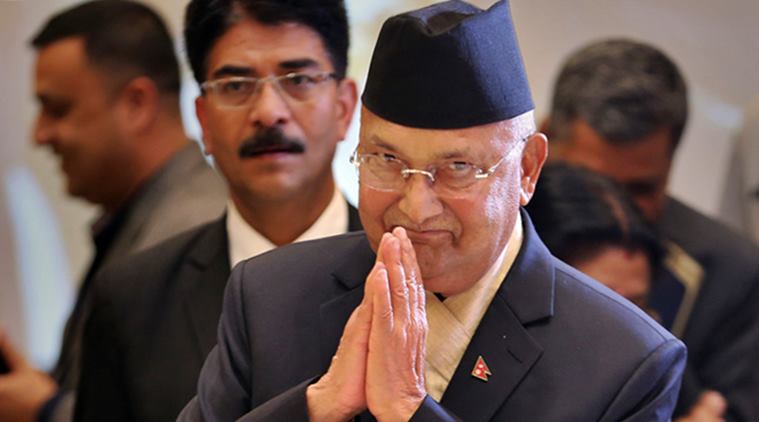 Prime Minister KP Sharma Oli is the clear winner in the battle for influence while Pushpa Kamal Dahal "Prachanda" and Madhav Kumar Nepal are the losers. Shocked with the "unexpected" decision from the apex court, Madhav Nepal returned to UML with tail between legs saying that he would keep fighting in the party against "Oli tendency".

Prachanda, relentless force for instability in Nepali politics with his constantly shifting loyalties, encountered the immovable force in the form of Oli. Faced with existential crisis after ignominious drubbing in the Second Constituent Assembly elections, Maoist Centre under Prachanda was desperately seeking a big tent to make themselves relevant. First Prachanda made alliance with Nepali Congress and even fought the local elections together (with instances of rigging, remember Chitwan). But he suddenly pulled the rug under Sher Bahadur Deuba's feet by joining hands with Oli to build an electoral alliance between CPN-UML and Maoist Centre that later led to merger and formation of NCP (with gentle nod from Communist Party of China-CPC).

India was unhappy with this electoral alliance. The then Indian envoy to Nepal Manjeev Singh Puri met top leaders and warned them that they were committing an error by bypassing India in making an alliance. However, India did not express its ire immediately as it had already burnt its fingers in the form of failed blockade post constitution promulgation. But it appears that it had been doing its homework in breaking the alliance while lying low (just noting the developments in Nepal).

The communist alliance had dealt another blow to India last year when the parliament amended the constitution to incorporate map of Nepal showing Limpiyadhura-Lipulekh-Kalapani that India is still occupying. Although Nepal has historical documents to prove ownership of the territory and it took the step in retaliation to India's new political map post revocation of special status to Jammu-Kashmir, India nursed deep grievances about Nepal's chutzpah. Communist government with nearly two-thirds majority had to be broken apart.

CPC tried to save the communist alliance as best as it could. Chinese ambassador in Kathmandu Hou Yanqi made hectic parleys with top brass of now defunct NCP to save the unification. CPC Vice-Minister Guo Yezhou landed in Nepal after PM Oli dissolved the parliament and met several leaders to try to keep the party intact. But things had move beyond control by then. CPC delegation returned empty-handed. As far as China's security interests are not hampered in Nepal, the former does not seem to mind whichever dispensation rules Nepal.

The current situation has proved beyond reasonable doubt that Oli remains unparalleled in Nepali politics to bend any situation in his favour.

Geopolitics aside, the current situation has proved beyond reasonable doubt that Oli remains unparalleled in Nepali politics to bend any situation in his favour. Although he was stabbed in the back by Parchanda in his previous tenure, he successfully plotted return to power with overwhelming majority. Recently, he was set aback by the Supreme Court's decision to reinstate the House of Representatives but kept his calm. The Court's decision on Sunday to revive UML is Oli's victory through and through.

Prachanda and Madhav Nepal, on the other hand, proved to be amateurs in front of Oli. From the day Oli dissolved parliament, the duo started attacking him left, right, and centre. Their activists indulged in hurling choice abuses at PM Oli and President Bidya Devi Bhandari.

Perception matters the most in politics and during the period after House dissolution Prachanda and Nepal lost the perception battle. One speech by Madhav Nepal showed his true colours and downgraded himself in the eyes of the public. He indicated at Oli's bullying of Prachanda in party secretariat and standing committee and said that he would have resisted Oli if he were in Prachanda's place. This showed that he was hankering after the post rather than standing for rules and regulations.

Prachanda and Nepal committed another blunder when they made a dash to Sher Bahadur Deuba's residence the day after apex court reinstated the parliament. Both of them had been saying that they had no greed for power but this episode showed that they were indeed trying to take upon power. Talks about constitutionalism and discipline were mere rhetoric for them. Oli rightly mocked them for ditching him and offering the post of PM to Nepali Congress on a platter. Madhav Nepal now has to eat crow and be ready to be pushed around by Oli in UML.

Respecting the court's decision, Madhav Nepal and other insurgent leaders have returned to the fold as they cannot let go of the strong legacy of UML and the election symbol sun. Ditching the party name and election symbol to mingle with Prachanda amounts to political suicide. Anyway, Nepal faction does not have required 40 percent of leaders to break away from UML.

Prachanda, meanwhile, committed another perception error after the court's decision. He should have expressed happiness with court's verdict of reviving Maoist Centre. His political acumen would have been demonstrated if he had committed to make the party stronger, rather than a B team of UML. It is a bitter reality that Maoist Centre is a spent force and it does not enjoy popular support but still Parchanda could have projected strength for the sake of public perception. Prachanda appears to be the pale shadow of "The Fierce One" that led the decade-long armed insurgency.

Even if Maoist Centre withdraws support to UML government, Oli has said that he will easily win majority support in the House. Some Maoist leaders have left the party for good and have pledged support to Oli even if that means they have to lose their (ministerial) posts. Some Maoist leaders have tried to convince Prachanda to reconcile with Oli and keep the communist government intact but insiders say that Oli is unwilling to patch up with Prachanda.

Insiders say that a large faction of Janata Samajwadi Party will support Oli government while Nepali Congress will not claim to make a government under Deuba's leadership. Why should he make amends with Prachanda when his government will remain intact even without Maoist support?

It appears that Oli will conduct the elections, be that early elections or the periodic elections in around two years. Can Oli be the first PM after restoration of democracy in 1991 to complete five-year tenure?