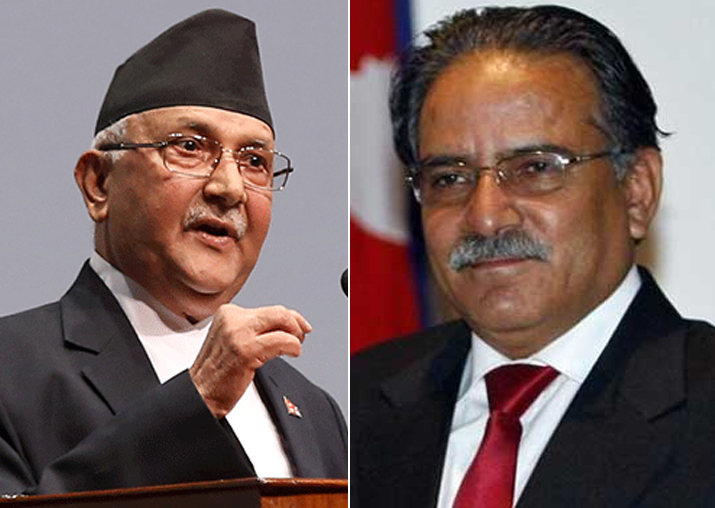 Even though ages ago Karl Marx declared, “Communists of the world unite; you have nothing to lose but chains”, communists in Nepal are facing problems of fragmentation and factionalism. There is a typical Nepali riddle – Can you make a ton out of frogs? In fact, the riddle is applicable not only to the political parties but it to almost all organized bodies in Nepal. There is no political party in Nepal which has not escaped vertical, horizontal and lateral splits together with mergers, acquisitions and absorptions - all in the name of party purification, unification, solidarity and strength.

Individually, Nepali people are superb performers. They are renowned for their hard work, dedication and discipline. Besides the play of economics, had not this been an underpinning factor, the demand for Nepali labour in the international markets would not have existed. This is as truer for British Army, Indian Army as much for the recent recruitment of Nepalese into Qatar police force – to provide security during upcoming World Cup.

The electoral alliance in 2017 between two big communist parties, namely, CPN (UML) and CPN (Maoist Centre); and their unification in 2018 surprised many Nepali people. Nearly, two years down the lane, the euphoria of communist unification has suddenly disappeared in the thin air. They are now heavily engaged in charging and counter-charging each other for the mess. The speed of winding and unwinding of two big communist parties match each other.

When they entered into an electoral alliance, UML and Maoist Centre had two motives. The first one was a tactical move to defeat Nepali Congress and secure two-third majority in the parliament. This would have allowed them to amend the constitution as per their liking. They nearly achieved this goal, albeit came a bit short of securing two-third majority.

The second motive had a long term objective, that is, to have a complete unification of left political forces in Nepal. Nepal must be a single country in the world where communist doctrine is in vogue, amid their downfall in Soviet Russia, Eastern Europe and communist China. By the way, China resembles more of a state capitalism than a communist country. Nepal is also a country with highest number of per capita left-leaning political parties. There are as many as eight communist parties registered with the Election Commission having the same name tag “Communist Party of Nepal” but differentiated by their bracketed subtitles.

With the breakdown of unification of NCP, the goal of unifying communist parties has turned upside down. There is now a rift within CPN (UML) - one headed by PM Oli and other by Nepal and Khanal. The repercussions of the vertical split in communist parties can be observed in their sister organizations, in provincial governments, in local governments and possibly, and in mushrooming NGOs.

Given the past background and schoolings of communist parties, party unification may not be an impossible task but, definitely, a herculean task to be achieved. Anybody reading the history of communist movement in Nepal will find constant splits and factions due to difference in ideology, external orientation, and personality clashes amongst the leaders. There was a time, when writing about communist parties, one needed to exercise an extreme care in spelling party names like “Masal” and “Mashal” or the numbers of general assemblies they have completed, just to identify a specific communist political party. Saving the red flag, there is no other unifying factor within communist parties.

The Chart 1 sketches visually a brief history and evolution of communist parties in Nepal, together with their polarization and fragmentation from 1950s to 2017. Please note, due to space constraint, only significant events are noted here. The chart needs to be updated from the point of alliance and unification to capture recent dis-unification process. Hopefully, we may end up with another cob-web. 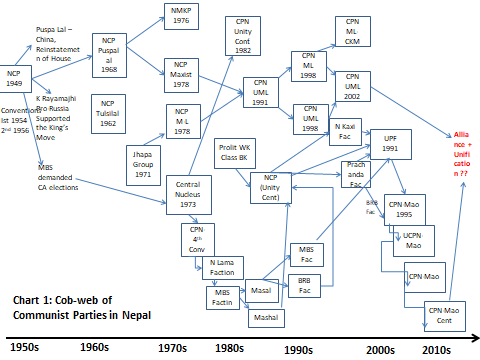 In 1950s, communist parties were banned from the country, albeit for a brief period. With the royal takeover in 1960, they got divided into three streams – one supporting; other opposing the King’s takeover and demanding the reinstitution of the parliament and the third one, demanding Constituent Assembly elections to draft a new constitution. These camps resembled roughly as royalist communist, the soft-liners believing in multi-party democracy and the hard-liners believing in one party regime. Obviously, each stream has its own multi-proliferation; often their metamorphosis completely a puzzle for a layman. The cob-web of communism got so complicated that during People’s Movement in 1990s, Late Ganesh Man Singh had to call first for communist unity before launching a joint people’s movement against monarchy led one-party political regime.

The déjà vu feeling in the leftist camp, brought about by unification between UML and the Maoists in 2018 did not last for more than three years. The implosion within NCP not only collapsed much hyped communist unification, it also brought political chaos in the country – dissolution of the parliament, reinstitution of the same by the court, the court annulling the unification of CPN (UML) and CPN (Maoist Centre) and stalemate situation between the Legislature and the Executive. It is reported now that Prachanda is looking forward to review court verdict with a view to restore communist unification. Now, they first have to look for unification within CPN (UML) before thinking over the unification with the Maoist Centre.

The electoral alliance between UML and Maoists was a technical match-fixing. They came through. But their unification in 2018 was nothing more than a ploy to share the booty. This was reflected by the formation of the central committee headed by two chair-persons and a discrete agreement between PM Oli and Prachanda to share PM’s chair on a turn by turn basis. In nature, we rarely find two-headed creatures; even when they do exist they have a short longevity. This is exactly what happened with the NCP. The whole process was unnatural from the very start.

The unification between two communist parties was like mixing oil with water. They do mix but at the end, there always remains a separation line. However, what is more significant to note is that the mixture becomes too slippery to step on. The Chinese envoys that came with a glue to stick UML and the Maoists together slipped down badly. Indian emissaries seem to have been successful in keeping them apart than putting them together. We still have to wait and see who are going to slip-in or slip-out stepping on the mixture of communist unification.