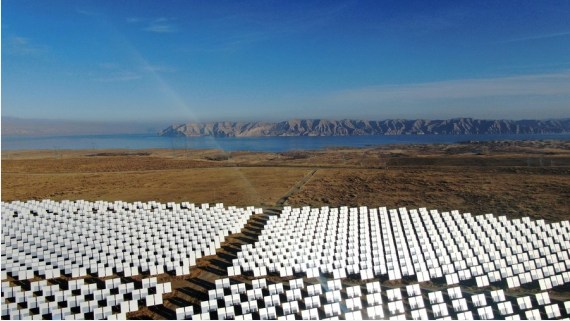 Beijing, 22 April (2021) - Climate change poses an existential threat to humanity, and demands a collective response by all sharing the planet, particularly the United States and China, the two largest economies in today's world.

Yet that is not the only climate challenge the two major countries have to deal with. While the average temperature of the Earth presses towards dangerously high levels, that of China-U.S. relations continues to record alarmingly low readings. That ominous trend also requires an urgent redress.

On the front of global warming, with heatwaves, wildfires, monstrous hurricanes and infectious diseases striking the world with increasing frequency and severity, it appears that a renewed momentum for international action is building up.

In China, which already leads the world in renewable energy development, President Xi Jinping has pledged to have his country's CO2 emissions peak before 2030 and achieve carbon neutrality before 2060. That is an ambition of epic proportions. It means the world's largest developing country will complete the world's largest reduction in carbon emission intensity in the shortest time in global history.

Meanwhile, China has also been an unswerving champion of international climate cooperation and global green development. In a recent video summit with French President Emmanuel Macron and German Chancellor Angela Merkel, Xi once again emphasized China's readiness to strengthen cooperation with France and Germany as well as South-South cooperation on addressing climate change.

And as the Belt and Road Initiative has grown into the world's largest platform of international cooperation, Xi, in a keynote speech delivered Tuesday via video at the opening ceremony of the Boao Forum for Asia Annual Conference 2021, reaffirmed China's resolve to "make green a defining feature of Belt and Road cooperation."

In the United States, the world's largest cumulative emitter of greenhouse gases, the wind has finally begun to blow in the right direction again. Much to the relief of the world, President Joe Biden has returned his country to the Paris Agreement. His 2.3-trillion-dollar infrastructure plan, if it could be passed by Congress, would become one of the largest federal efforts to curb U.S. emissions.

More encouragingly, the two big countries have demonstrated a strong willingness to cooperate against the common threat. Xi will on Thursday attend and address a virtual Leaders Summit on Climate hosted by Biden, days after the two sides reaffirmed their commitment to bilateral and broader climate collaboration and their support for the upcoming COP 26 in Glasgow during a visit to China by Biden's special envoy, John Kerry.

As a matter of fact, tackling the climate crisis brings vast opportunities for China-U.S. cooperation, not least in galvanizing a global commitment to a green post-COVID-19 recovery and developing the technologies and manufacturing the products needed to slow the warming. That, in turn, means new investments and jobs.

Another reason for optimism is that the two countries once had a robust cooperative relationship over climate change during the Barack Obama administration, when Biden was vice president. Their productive cooperation undergirded the global endeavor that culminated in the Paris Agreement. Now the only restraint on unlocking the full potential is the chilly climate of their relationship.

Three months after Biden moved into the White House, positive signs remain few and far apart of a general thaw in what many deem as the world's most important bilateral relationship, as the new U.S. administration appears to a large degree reluctant to abandon its predecessor's misguided perception of and calculation on China.

Indeed, Washington has become so steeped in unilateral and hegemonic behavior that many fear the United States would manipulate the climate crisis and turn it into yet another excuse to contain China's development, such as by ganging up with some so-called allies to pressure China into setting unrealistic targets of emission cuts.

Should that be the case, such machinations would not work. China is a ready and sincere partner for climate cooperation, but it will not accept climate bullying. It will resolutely defend the legitimate development rights of itself and other developing countries. As climate change is caused by cumulative emissions, climate actions should be based on the principle of common but differentiated responsibilities.

Instead of allowing climate to become a new front of friction and even confrontation, Washington should work with Beijing to leverage bilateral climate cooperation to make up the trust deficit between them and improve the atmosphere of their overall relations. It is an eager expectation of the international community that climate cooperation would repeat the magic of Ping-Pong Diplomacy.

After all, big countries should behave in a manner befitting their status and with a greater sense of responsibility. It befits their status as well as the critical moment that the United States and China join forces in good faith to tackle both climate changes.