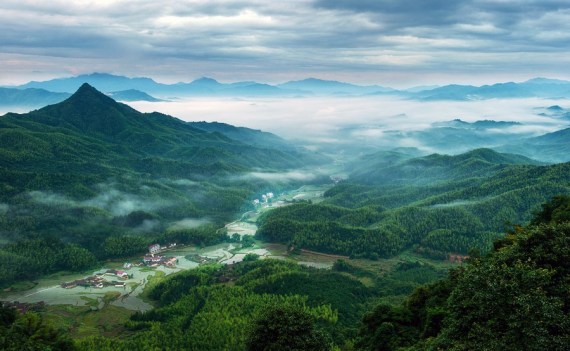 Nanchang, 25 April (2021) - Jin Zhufu, an entrepreneur engaged in bamboo processing, resolved his financial hardships through a particular bank loan that he had obtained by mortgaging a tree plot for 15 years.

"With the loan worth 850,000 yuan (about 131,000 U.S. dollars), I could not only repay my debts but also expand my bamboo bar workshop," said Jin from Zixi County in east China's Jiangxi Province.

Previously, the 33.3-hectare land planted with redwood, instead of bamboo, could hardly generate profit for Jin. Thanks to the local "Liangshan Bank," the first of its kind in Jiangxi, green resources that Jin once deemed useless could be turned into assets.

The name "Liangshan Bank," or "the bank of two mountains," came from the "two mountains" concept of Chinese leadership, according to which "lucid waters and lush mountains are invaluable assets."

The Zixi Liangshan Bank was established in August 2020 as part of the province's efforts as a national ecological conservation pilot zone. It is not a financial institute, but serves as a platform for integrating the management rights of green resources to make better use of them. For those who have mortgaged the resources to the platform, a local commercial bank will provide loans for them.

Instead of simply holding Jin's plot, the platform, in cooperation with the local ecological industrial association, was able to lease it to companies for production on the basis of protecting the ecology.

Subsequently, the plot bearing redwood was leased to a local tourism company to develop ecological tourism.

He Yamin, general manager of a local company, said his enterprise has leased a bamboo plot from the platform for producing bamboo shoots, which will be processed into snacks.

"Our wet bamboo shoot products are five times the price of dried bamboo shoots growing on the land in the past. The added value is 10 times as much," said He.

Jin Jianhua, director of the county's office of finance, said Zixi has a forest coverage rate of 87.7 percent, but the income generated by the forests accounted for less than 1 percent of farmers' total income.

However, since its establishment, the Zixi Liangshan Bank platform has integrated forest resources up to 6,700 hectares, which, after assessment, have been used for green food, tourism, or carbon trade industries or upgraded with higher value-added trees.

"With the Liangshan Bank as a platform to integrate green resources, market vitality has been unleashed," said the official.