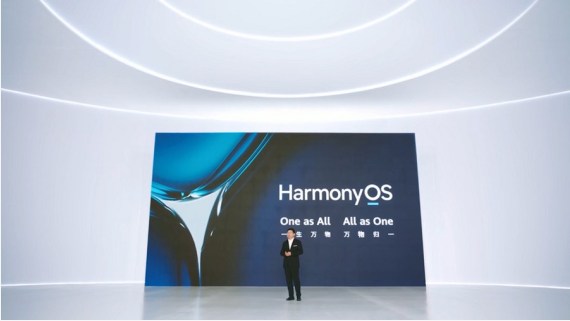 Beijing, 3 June (2021) - Huawei officially unveiled its own operating system, HarmonyOS, for smartphones on Wednesday, offering a brand new choice for global customers in a digital world.

The Chinese name of the system, Hongmeng, is borrowed from the country's mythology, meaning breaking free from chaos and starting something new from scratch.

That is exactly the meaning Huawei intends to give to its new product. The launch of HarmonyOS marks a breakthrough in Huawei's drive in ecosystem development by itself in the face of Washington's aggressive and unfounded sanctions. It also marks a significant step in China's independent tech innovation amid potential risk of a technological de-coupling between the two countries pushed by Washington.

In addition to developing a new operating system, Huawei is also working on in-car software and cloud computing, pivoting to software and service business that does not rely on U.S. supply chains.

Given China's massive domestic market, Huawei has rather ample space to nurture its own ecosystem in collaboration with diverse application developers and device manufacturers.

While the roll-out of Huawei's operating system does not aim to replace other mainstream peers, the rise of HarmonyOS can be considered as the first step for Chinese tech companies to break the Western monopoly on operation systems.

In a sense, the fledgling system was born thanks to immense external pressure that is still seeking to stifle Huawei.

For quite some time, the United States has been hyping up groundless national security charges against Huawei and other Chinese tech firms, imposed round after round of embargoes and coerced its allies, notably those in Europe, into elbowing Huawei out of their 5G industries.

What those fearmongers and zero-summers in Washington have been obsessive about is to let China remain technologically inferior to the United States for as long as it can.

However, Washington's moves to deny China's legitimate rights to develop in a technological capacity have shown themselves to be ineffective as well as destructive.

On the one hand, attempting to shut out Chinese tech companies in an increasingly digitalized and highly-connected world is hardly possible. The birth of HarmonyOS is one example. Also, healthy competition between Chinese and American tech firms can lead to progress and is good for both sides and the rest of the world.

On the other hand, pushing Chinese firms out of the Western market and the semiconductor supply chain would leave those countries behind in the digital slow lane, damage their own industries, disrupt the global industrial and supply chains and harm market openness in Western countries.

Staying open and embracing cooperation as well as healthy competition: that is the key to stimulating technological innovation in today's world. That is also how the United States has developed into one of the world's top technological powers.

It is thus in the shared interests of the international community for the United States and other Western countries not to suppress China's technological development, but to accommodate it. Together, they can make a huge difference for the well-being of humanity.

Although the HarmonyOS still has a long way to go before it can be an alternative to iOS and Android, its development will bring about a healthy competition. Customers across the world, whose needs have been increasingly diverse, will stand to benefit the most.