How was Maoist war in Nepal financed? 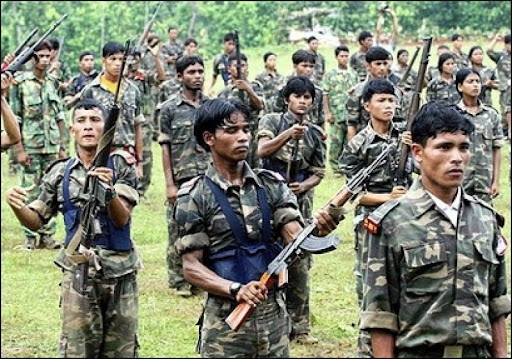 The reason why the Afghan Government failed to resist Taliban is simple: The government depended heavily on foreign money while Taliban survived and thrived on internally generated funds. This money came from drug dealings, local taxes and selling mines and minerals. Compared to external sources of funds, internally generated funds are highly sustainable. Once external funds were pulled out, the Afghan government collapsed like a house of cards.

The sources of finance or the financing is the key to understanding conflicts, their escalations and solutions. Without financial resources, it will be near impossible to wage wars.

Nearly all the countries of the world have ratified these two conventions (UNCTOC, 190 countries and UNCAC, 188 countries). The universality of these two conventions expresses growing concerns over the role of finance in wars, terrorism and conflict situations. Illicit financial flows including money laundering, recovery of stolen assets, identification of beneficial owners, golden passports and covert dealings in arts are some of the big issues in present day corruption control.

There are more than enough materials on Maoist ideology and leaders, organizational capability and mobilization strengths. Number of writers including the Maoists leaders and cadres have written materials related to the Maoist movement. But materials and documents related to Maoists' financing of their decade long (1996-2006) war in Nepal are rare. This has been a closely guarded secret. This in turn has spread founded or unfounded rumours related to the Maoist leaders owing secret bank accounts or investments in foreign lands. Quoting Lintner, Prof Dhruba Kumar (2003) writes that the Maoists of Nepal are amongst the richest terrorist groups in the world with the estimated sum accumulated between US$ 64 million-$124 million from various sources.

In terms of financing, the Maoist war could be termed as a low intensity war though it entailed heavy cost to the state. This came in terms of increased security expenditures (army and police), security of infrastructures like telecom towers, bridges, public buildings, roads and hydro-power dams. Prof Kumar (2003) has estimated the Maoists military spending at the most to be 5-6 per cent in comparison to the government spending.

Earlier, the armed revolution led by the Nepali Congress Party in 1950s toppling autocratic Rana regime was made possible by funding from dissenting aristocrat Rana families self-exiled in India. During their armed revolt against monarchy-led panchayat system in 1960s, some funds were collected through illicit means. One such example is the hijacking of a plane flying from Biratnagar to Kathmandu, loaded with Rs 3 million Indian rupees belonging to the central bank of Nepal.

In terms of financing, the Maoist war could be termed as a low intensity war though it entailed heavy cost to the state.

Due to lack of systematic studies on financing of the Maoist war, one had to rely on gossips, rumours and informal channels. Given the fact that much of the arms and ammunitions used by the Maoists were looted from the security personnel, one can fairly imagine low economic intensity of the war. Still then, there were procurement of arms and ammunitions from abroad and the use of satellite communication system that could entail financial costs. PLA could have survived on voluntary contributions or paltry sum provided by the party, yet given the fact that their hideouts were in India, it must have posed heavy financial burden. The author of the book called Salam Rolpa has highlighted lavish living style of the Maoists hiding in India.

Even the use of Improvised Explosive Devices like the pressure cooker and pipe bombs are less costly devices used by the Maoists. Essentially, these materials are homemade items. They relied primarily on deployment of masses as human defence system rather than the use of imported warfare technology.

Definitely, one greater source of financing was levying of salaries of the mass number of school teachers who were their cadres and civil servants and businessmen supporting their cause or their sympathizers in the Maoist-dominated areas. The Maoists torturing or even killing of innocent teachers must have to do with ensuring of the smooth financing.

They also relied on local business people for funding. During the decade long war, it was near impossible for businesses to sell even simple items like instant noodles, biscuits, foot wears, GI Pipes, pressure cookers, khukuri, electrical wires and some other chemicals without government monitoring. Some businesses “managed successfully” by taking into confidence both sides of the conflict.  Chanda Aatank or forced donations (extortions) came into political lexicon only after the first failed negotiations with the Maoists in 2001. We have little information on kidnapping and taking of hostages to collect funds. Unlike Tamil Tigers who relied on diaspora for funding their war in Sri Lanka, the foreign employment business in Nepal had not taken a root when the Maoists started their “People’s War”.

The INGOs and NGOs, who were mandated to work in remote areas, also became a good source of money for the Maoists. There was a rumour that some fake or ghost consultants co-opted into the Executive Boards for the sake of getting approvals from the Maoist to work in remote areas as well as to channel funds to the Maoists in the name of consultants’ fees. This scribe had an awkward experience of how the materials supplied for a government office in West were looted by the Maoists in 2005.

Grapevine has it that the third possible source of money came from yarsagumba (a Himalayan Herbal Viagra) trade in Western Nepal.

The second bigger source of financing must have come from looting of the banks, state-owned enterprises and cooperatives. It was near impossible for some bank branches operating in remote areas without security risks. Anybody taking a stock of bank looting by the Maoists can clearly find a pattern or a correlation between bank looting and their next assault. In many cases, bank looting was very much a part of their assault.  Culling figures from different Bank sources, Prof Dhruba Kumar (2003) writes that “the Maoists have looted a total of over Rs 110 million from 18 branches of the Rastriya Banijya Bank, Rs 193 million from 17 branches of the Nepal Bank Ltd., Rs 43 million from some 187 branches of the Agriculture Development Bank, Rs 105 million worth of food grain etc. from Nepal Food Corporation – making a total looting of Rs 451 million”.

Grapevine has it that the third possible source of money came from yarsagumba (a Himalayan Herbal Viagra) trade in Western Nepal. Similar to the situation of foreign employment business, trading of yarsagumba was also doubtful because it too had not taken a root when the Maoists started their war. However, given the exotic value of the herb, it could be possible that the Maoists may have used yarsagumba as a source of funding.

Hopefully, in future, some researchers will document materials on how the Maoists financed their "People’s War". Information on these is essential to understand the nature and sustainability of conflicts. Finance essentially acts like a blood or a respiratory system inside an organism. There could be some transparency in the “uses of funds” but the “sources of funds” are often a matter of closely guarded secret. This secrecy needs to be exposed.

He Jing Beijing, 1 July (2022) - The following are the latest developments in the Ukraine crisis…