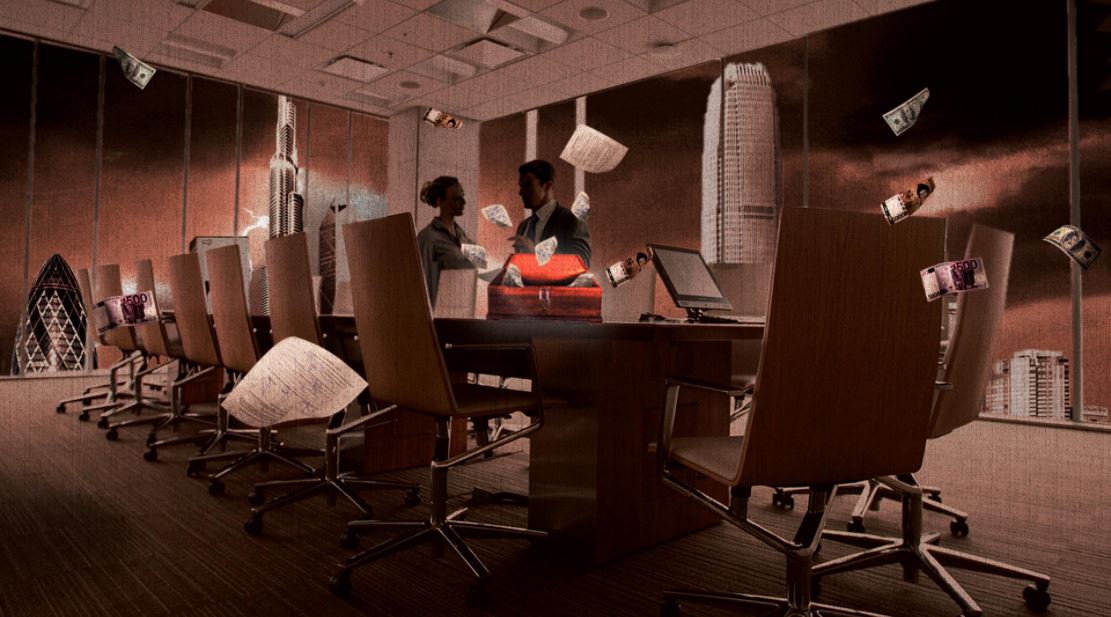 The Pandora Papers, published on Sunday, by the International Consortium of Investigative Journalism (ICIJ) has exposed dozens of world leaders and hundreds of public officials using offshore tax havens to hide their assets worth hundreds of millions of dollars. Globally, there are 70 offshore tax havens. Present investigations are confined to 14.

In January 2019, CIJ-Nepal, through its NepaLeaks investigation, identified 55 Nepalis and non-resident Nepalese involved in offshore transactions. There will be many more revelations in the days to come as the state machinery does nothing other than hoisting a banner of “zero tolerance against corruption”.

The Pandora Papers are the latest in a series of mass ICIJ leaks of financial documents, from LuxLeaks in 2014 to Panama Papers in 2016 followed by the Paradise Papers in 2017 and FinCen files in 2020. CIJ-Nepal has been collaborating with ICIJ in exposing Nepalese tycoons with shady deals in sunny places. So far good news is that no names of the prominent politicians have been linked though many believe they are in cahoots with the business people.

So far good news is that no names of the prominent politicians have been linked though many believe they are in cahoots with the business people.

Probably, this could also be the reason why no actions have been taken so far when it comes to cross border money laundering, illicit financial flows and corporate tax evasions. Who knows this could even lead to the opening up of Pandora’s Box letting out all kinds of predictable and unpredictable worms and germs in the economy.

Currently, the global fight against corruption is waged at two levels. At the international level, there is growing attempt to build knowledge related to anti-money laundering, recovery of stolen assets, strict detection and control of terrorist financing, extradition of corrupt leaders and elimination of safe havens for the corrupt people to hide themselves and their ill-gotten wealth. There is growing international collaboration on these issues. The idea here is to block cross border corruptions.

At the national level, governments, anti-corruption oversight agencies, civil society organizations, media and other stakeholders are waging a kind of war against corruption. The mounting of internal and external pressures is expected to cure the global problems of corruption. But it is at the external level that anti-corruption agencies are finding difficult to cope with. Literally, when it comes to cross border corruption, they are helpless.

Illicit financial flows, international money laundering, and tax evasions involving billions of dollars are being hidden away at the cost of development. The Guardian reported that tax havens cost governments anywhere between US$ 400bn and US$ 800bn annually in lost tax revenues. The amount is far in excess required for Covid 19 vaccination.

Investigations into beneficial ownership, issuing golden passports and even covert dealings in art works are newer forms of corruption mechanism invented at an international level. In order to avoid tax, celebrities and tycoons frequently change their residence.

Illicit financial flows, international money laundering, and tax evasions involving billions of dollars are being hidden away at the cost of development.

Years ago, The Kathmandu Post (26 May 2009) reported an increase in the money parked in the Swiss banks, particularly after political changes in 2006. In 2005, it was reported to be Rs 1.7 billion and this increased to Rs 6.16 billion in 2006 and Rs 7.46 in 2007. Later, the same paper reported a massive increase in 2015. This is presented in the Chart below. Please note the figures are in Swiss currency. 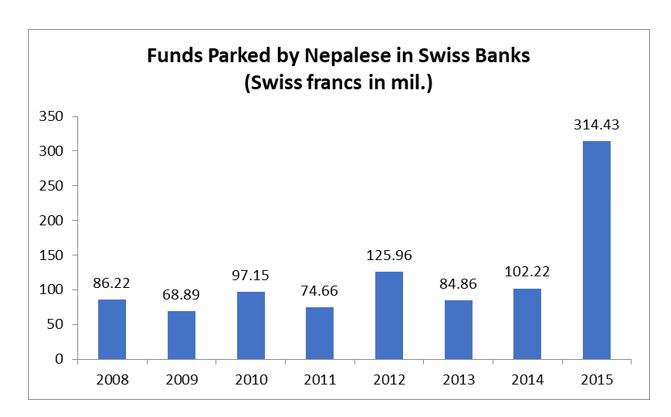 A study by the Global Financial Integrity, an NGO based in Washington DC, has estimated illicit financial flows for Nepal in 2000-2008 to be between US$ 563 million and US $566 million per year. Using the same method of estimation but covering longer span of time (1990-2008) for 48 Least Developed Countries (LDCs), another study by the UNDP estimates illicit flows in Nepal to be between US $419 million to US $480 per year.

With the increased time span, the average value may have come down; however, what is alarming is that Nepal is ranked at the sixth position among the 48 LDCs having the largest cumulative illicit financial flows. With a total of US$ 35 billion, Bangladesh is at the top of the list. The total illicit flow for Nepal is estimated to be US$ 9.128 billion. Moreover, it is on rise. It is not just the labour that is out migrating (overseas employment) from Nepal, even the capital is flying from Nepal. Out migration of labour brings in remittances but it is not sure whether the capital flights will ever come back.

Why nothing has been done in Nepal?

Other than naming and shaming purpose, I suppose CIJ-Nepal’s revelations will lead to nothing. Take the case of evasion of billions of Ncell capital gains tax by both Nepali and foreign business people related to share transfer. Simply investigations into this single transaction would have helped to contain illicit financial flows and money laundering business. The primary factor why we are helpless is due to lack of knowledge and skills. Our anti-corruption body called CIAA is a lame duck when it comes to offshore financial crimes.

We do have a department that goes by the name of anti-money laundering but is squarely confined to detecting money laundering within the country. Imagine when TeliaSonera sold off its Ncell shares to Axiata involving actors coming from multiple countries like Malaysia, UK, Singapore, Norway, Sweden and Nepal with companies and their subsidiaries having criss-crossing ownership structures, it is beyond the reach of lok sewa pass officers to grasp the meaning and complications of offshore financial transactions. It is one thing for social activists, with a tinge of nationalism, to organize mass demonstrations at Maitighar Mandala decrying tax evasions; it is another thing to wage a legal battle at international dispute centres.

It is one thing for social activists, with a tinge of nationalism, to organize mass demonstrations at Maitighar Mandala decrying tax evasions; it is another thing to wage a legal battle at international dispute centres.

Is it not an irony when we take pride in having a lone Nepali dollar billionaire in the list of Forbes magazine, and, at a same time, quizzical about how he managed to invest so much money abroad? Same goes with Ajeya Sumargi though the things are in reverse order. We need FDI and at the same time, make hue and cry over Sumargi importing billions of rupees from abroad. What is the point of CIJ-Nepal’s revelation at a time when the official policy is waiving investigations into “the source of money” when it is invested into specific sectors of the economy?

Did not we opt in 2002 a scheme that goes by the name of Voluntary Disclosure of Income Scheme (VDIS) – to legitimise illegal earnings, giving an incentive of 10 percent tax deductions? What is the point in controlling illicit financial flows when we promote a consorted move to give dual citizenships to non-resident Nepalese (NRNs)? In a country with heavy trade deficits, gold is still a major commodity of importation. I just wonder why people invest abroad when the country itself is a tax haven country and a good place for money laundering. If you don’t believe this scribe, try visiting casinos, obviously you have to fake yourself as foreigners because Nepali laws do not allows Nepalese to visit casinos.