Monarchists on the prowl 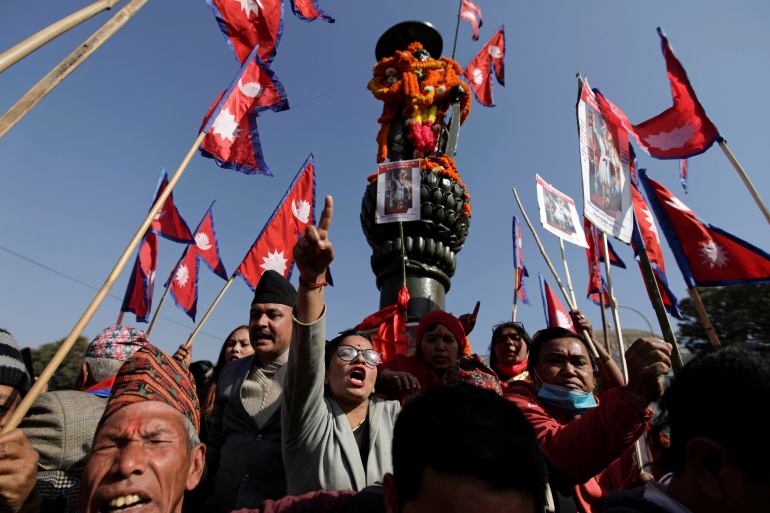 During dreadful panchayat days I did encounter many people harking back on old rana days. As a youngster, I remember some elders praising ranacracy for maintaining strict discipline and control in the society. They recall the imposition of night time curfews that literally helped to wipe out thieves and burglars from the Kathmandu Valley. However, they have no idea how the system was sucking the blood from inside.

The abolition of autocratic panchayat system and the arrival of multi-party democracy in 1990 also led to a similar situation. There were no less numbers of people recalling good (bad) old panchayat days and the pomposity of the monarchy. The people were fed up with party indiscipline, strikes, lockouts and public disturbances and nuisances taking almost on a daily basis. They wished for a disciplining authority like what they endured during panchayat days.

With the Federal Democratic Republic Nepal in disarray, the rajabadis are again having a field day. The regressive thinking is back here again. There are no less number of people advocating for, at least, constitutional monarchy, if not an out and out autocratic one. Some of the loudest voices can be heard in the social media, particularly advocating Mahendrapath. Bolstered by fluid political situation, including the impasse inside the parliament, there is euphoria inside the camps of rajabadis. Some of them are not only claiming for the return of monarchy, they are also predicting its inevitability. Others are busy warning and listing the names of the political leaders who might possibly go to the gallows.

In the Dashain message released to the public, even the former King Gyanendra, who normally refrains from making political comments, dared to speak loud this time: “In a country like ours, it is not relevant to have monarchy without democracy and democracy without monarchy”.

Some of them are not only claiming for the return of monarchy, they are also predicting its inevitability. Others are busy warning and listing the names of the political leaders who might possibly go to the gallows.

It is normal for elders to be nostalgic with the past. It is far easy to recall the past than to predict an uncertain future. Moreover, retired elders see no or little future. Therefore, it is natural for their nostalgic longing. However, what is difficult to comprehend is a youngster wishing for the return of the dead monarchy. The youngsters have no idea about the anarchy of monarchy in Nepal.

It is normal for people to long for the past when they do not see the future or the future is bleak. Could it be true that the youngsters in Nepal also do not see their future? In an opinion poll survey (2021) organized by Sharecast Initiative Nepal, involving 5,082 households, 44.3 percent of the respondents opined that the country is heading towards a wrong direction. This is more than double who responded the country heading towards right direction. Given the fact that political parties and their leaders are the least trusted institutions in Nepal, it is no wonder people are having a negative attitude on state of affairs in the country.

First, monarchy got abolished not because Nepali people wished for it. If this had been a case pro-monarchists will never challenge holding a referendum on monarchy. The downfall of monarchy was due to its own disrepute. The infamous palace massacre that took place on 1 June 2001 that wiped out ten family members including the King and the Queen is the single most disrespecting factor that led to the ouster of monarchy in Nepal.

Even to date, the murder is shrouded in mystery though fingers are pointed out to the inebriated crown prince having a serious dispute with the family members over his chosen fiancée. There are loads and loads of Nepali people, especially the youngsters from the elite family, not subscribing to this hypothesis. This conspiracy theory must be cleared before seeking reinstatement of monarchy. Who knows, probably, this is a single factor for political leaders refraining from taking any investigative actions?

The second most determining factor for the downfall of monarchy in Nepal is again, not the wishes of Nepali people, but the stupidity of King Gyanendra himself. His lust for power led to his downfall. His twin strategy – labelling the Maoists as terrorists and the multiparty politicians as corrupt leaders, literally, backfired and led to a “twelve point agreement” between the Maoists and the multiparty politicians. It is now well documented that when King Gyanendra usurped power in February 2005, the Maoists were expecting a call for a power sharing. He down played political forces. He even irritated external forces like India, the US and the EU to his isolation.

The third important factor was the disowning of the monarchy by the then Royal Nepal Army. The palace massacre also brought disrepute to the army. The public openly questioned army’s ineptitude to protect its Supreme Commander while the army explained “internal security” is not its responsibility. After the palace massacre, the army also got engaged directly with the Maoists hitherto left spared by King Birendra. The army was dragged into war with the Maoists after they attacked an army barracks in Dang district. The Maoist war brought several benefits to the army in terms of increased defence budget, army recruitments and procurements. It has become a state within a state – a force to reckon with and no need to heed anybody. This must be the reason why there is often call for army takeover by the rajabadis.

The Hinduism plank is to garner support from India and the glamour of Himani Singh is being used to get support from the youngsters.

Finally, the pro-monarchist forces are not clear on their demand. Are they seeking the return of an autocratic monarchy like the one imposed in 1960s or the constitutional monarchy variant of 1990s? Are they calling for a baby king or a cultural monarchy? The royalist forces themselves lack unanimity in their call for monarchy. So far, they could be seen using two planks. The Hinduism plank is to garner support from India and the glamour of Himani Singh is being used to get support from the youngsters. For long, this scribe subscribed to the notion that Nepal’s monarchy will topple within a minute with the fall of British monarchy. The reason is that it was nothing more than a copycat of British monarchy though many believe latter to be a harmless institution. However, with the fall of monarchy in Nepal, I still recall British press writing “time to learn lessons from Nepal”.

He Jing Beijing, 1 July (2022) - The following are the latest developments in the Ukraine crisis…