Taliban assures no terrorist group to use Afghan soil against Pakistan: Pakistani FM 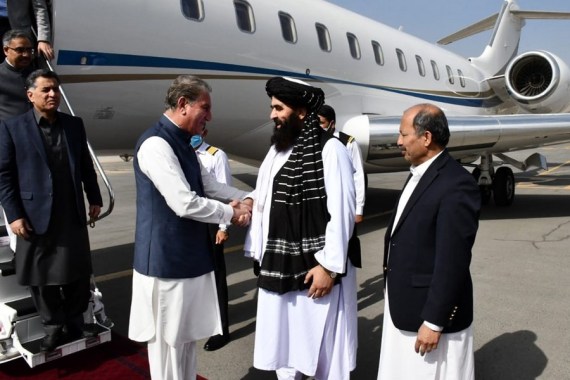 Islamabad, 22 October (2021) - The Afghan Taliban has assured that no terrorist organization will be allowed to use the Afghan soil for carrying out terror activities against Pakistan, Pakistani Foreign Minister Shah Mahmood Qureshi said here on Thursday.

Addressing a press conference following his day-long visit to Kabul, Qureshi said that the Taliban responded with clarity that "neither the banned Tehrik-e-Taliban Pakistan nor outlawed Balochistan Liberation Army" will be allowed to use the Afghan soil to harm Pakistan.

He said that the visit was intended to create space and generate a coordinated regional approach for Afghanistan.

Qureshi said that the Taliban were informed about how Pakistan is advocating globally to provide humanitarian assistance to Afghanistan and urging the international community to save the possible economic collapse of the country.

On behalf of Pakistan, the foreign minister announced humanitarian assistance worth five billion Pakistani rupees (over 28 million U.S. dollars) to Afghanistan during the press conference.

A high-level delegation made up of representatives from different ministries and institutions was accompanying the foreign minister on his Afghan tour, which worked out different plans and initiatives to address the issues of trade and travel between the two countries.

Qureshi said that the Pakistan-Afghanistan border will now remain 24/7 operational for trading purposes, adding that Afghan traders will be given an on-arrival visa.

On the Taliban's request, the procedures at the Pakistan-Afghanistan border crossings have been made easier for the Afghans entering into Pakistan, he said, adding that passengers having health or any other emergency will also be given an on-arrival visa.

"They will no longer be required to follow the long procedures which were in place earlier."

The foreign minister said that fresh vegetables and fruits could be imported duty free to Pakistan to give benefits to Afghan farmers. It will be further worked out "which sectors could be given zero-ratings and in which areas a reduction in taxation could be provided," he added.

Qureshi said that a delegation from Afghanistan would also come to Pakistan in the follow-up of this visit in order to finalize the details agreed upon by the two sides.