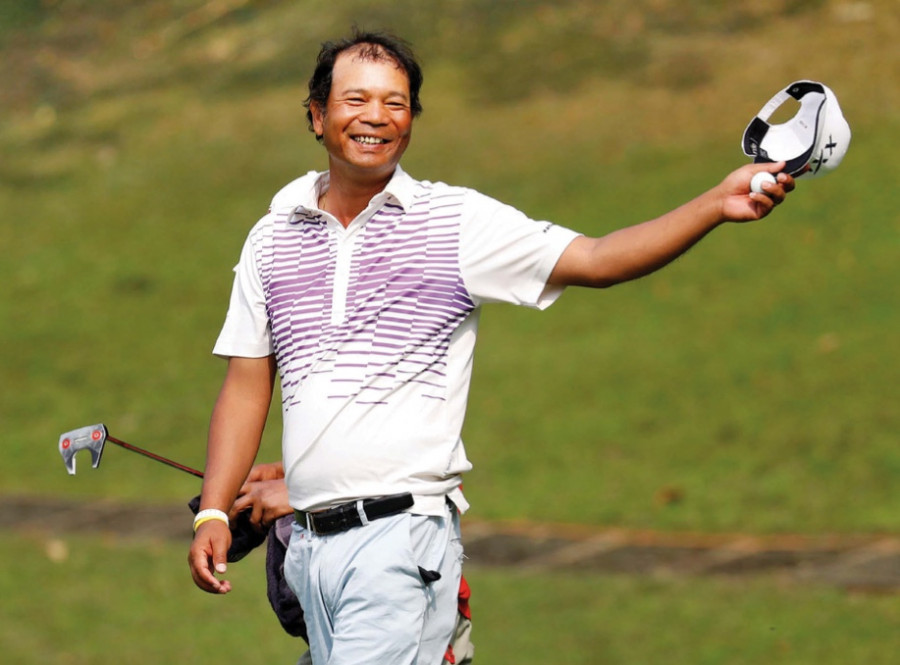 Kathmandu, 9 December (2021) - Nepal No 1 pro Bhuwan Nagarkoti took lead after the second round of the Surya Nepal Kathmandu Open at the par-68 Royal Nepal Golf Club on Tuesday.

Amateur Subash Tamang moved to joint third at four-under 132 after the 13th South Asian Games double gold medal winner shot four-under 64. Overnight joint leader Jayaram Shrestha is third among the pros and fourth overall after he played a round of two-over 70. Jayaram had carded six-under 62 to share the lead with Kumar Kami on the first day.

Dinesh Prajapati, Sanjay Lama and Kumar Kami shared the fourth position among pros at two-under 136. Dinesh carded two-under 66, while Sanjay carded second straight 67 and Kumar faltered to four-over 72 in the second round. Dhana Bahadur Thapa (69) is seventh at even-par 136, one stroke ahead of Sukra Bahadur Rai (68). Bhuwan Kumar Rokka (75) is ninth at 137.

Niraj Tamang and Pradip Kumar Lama share 16th position at 143, while Binod Tamang is 18th at 144. Kamal Thapa, Tirtha Paudel and Basanta Raj Gurung survived the cut which was applied at 10-over 146.

Leader Bhuwan played one-over 35 on the front nine that included a bogey on the ninth hole. After taking the turn, he carded birdies on the 13th, 17th and 18th holes against a bogey on the 15th hole to finish the back nine at two-under 32.

Rabi carded one-under 33 on the front nine after he carded a birdie on the first hole and saved pars on the next eight holes. On the way to playing even-par 34 on the back nine, Rabi carded birdies on the 14th and 18th holes against bogeys on the 10th and 16th holes.

Jayaram played even-par 34 on the front nine before shooting two-over 36 on the back nine. He carded birdies on the first and ninth and in between faced bogeys on the second and fourth holes before taking the turn. On the back nine, Jayaram dropped shots on the 12th and 13th holes.

In amateur section, Subash Tamang is 13 strokes ahead of Maj Nischaya Jung Rayamajhi. Subash carded three-under 31 on the front nine before adding one-under 33 on the latter half. He sank an eagle on the fourth before dropping a shot on the next hole. He also carded birdies on the second and ninth holes. Subash began the back nine with a birdie and added another on the 17th hole but he dropped a shot on the final hole.

Nischaya played a round of five-over 73 for the 36-hole total of nine-over 145. Mithun Rai is third at 146, while Suresh Tamang, Capt Mahendra Phagami and Bidur Tamang also made the top six to qualify for the final two rounds.