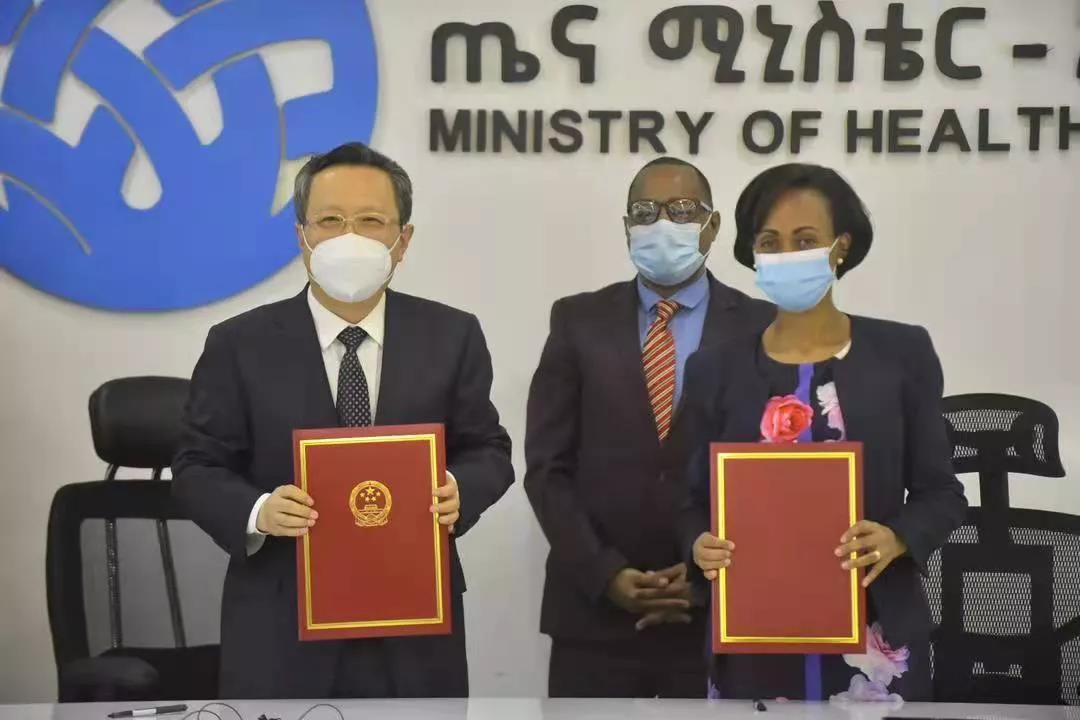 The Chinese government donated 2.2 million doses of COVID-19 vaccines to Ethiopia in January, 2022. The handover ceremony for the donation to the African country was held at the Ethiopian Ministry of Health and attended by Zhao Zhiyuan, Chinese Ambassador to Ethiopia, and Lia Tadesse, Ethiopian Minister of Health. (Photo courtesy of the Chinese Embassy in Ethiopia)

"Sincerity, humility, optimism and vision, those are what I see in Chinese President Xi Jinping, the important qualities as a leader of this great country," said former Ethiopian President Mulatu Teshome.

The former leader of Ethiopia still remembers his meeting with the Chinese President eight years ago. "When we started exchanging our views, he listened to me carefully, and he was always smiling warmly. His expression of offering me sincere compliments remained memorable up to this day," Teshome said.

Teshome was elected President of Ethiopia in October 2013. About nine months later, he chose China as the destination for his first overseas visit after he took office. On July 9, 2014, he was received by Xi with a grand welcome ceremony hosted at the square outside the east gate of the Great Hall of the People in Beijing.

President Xi called Teshome an old friend of the Chinese people and hailed the China-Ethiopia relationship as an example of solidarity and cooperation between developing countries, which made him deeply touched, Teshome told People's Daily.

Ethiopia and China have maintained close cooperation during the past years, Teshome noted. China, always been committed to helping Ethiopia get rid of poverty, is a reliable friend of Ethiopia. China never imposes its own will upon others when dealing with international relations and international affairs, and its economic and investment cooperation attaches no strings.

The government and people of Ethiopia are grateful to President Xi and will never forget the positive changes China has brought to their country, Teshome said.

China is the "second home" for Teshome. After graduating from high school in 1976, he came to China to study Chinese sponsored by the Ethiopian government. He started at Beijing Language Institute, known as Beijing Language and Culture University today, and then went to the Department of Philosophy of Peking University and obtained a bachelor's degree there. Later, he furthered his study in the realm of international politics at Peking University and got master's and doctoral degrees.

"Development" was what deeply impressed Teshome during his ten-year stay in China. Though the Chinese people were not living a wealthy life at that time, the Ethiopian could still see that the country was a land full of hope.

"Chinese leaders have drawn a blueprint for reform and opening-up, and the hardworking Chinese people, united together, long for changes. I'm fortunate to have witnessed the growth of China," he told People's Daily.

China's development miracle enhanced Teshome's resolution to lead Ethiopia toward better development. When he served as the President of Ethiopia, the country witnessed rapid economic development. Its GDP was once on double-digit growth.

Teshome attributed the rapid development to Ethiopia's close cooperation with China. "China helped us build the Addis Ababa–Djibouti Railway and launch two man-made satellites. It also established industrial parks and has offered scholarship programs that sponsor young Ethiopians who want to study in China. Great changes have taken place in my country," he said.

As one who has witnessed the development of China, Teshome is amazed at the country's achievements made since the reform and opening-up.

"In just 40 some years, China has grown into the second-largest economy in the world and the Chinese people’s lives have significantly improved. Under the leadership of the Communist Party of China (CPC), the country has achieved victory in poverty alleviation, which commands the attention of the whole world," Teshome noted.

Teshome said China's practice has set an example for Ethiopia's economic and social development and China's success is of remarkable significance for the world.

After he read the book Xi Jinping: The Governance of China, he gained a deeper understanding of China's development philosophy and experience. He said the CPC and the Chinese government put people in the center place and are very visionary.

In recent years, China and Africa have further enhanced their cooperation. Both the “eight major initiatives” announced at the Beijing Summit of the Forum on China-Africa Cooperation (FOCAC) and the “nine programs” identified at the Eighth Ministerial Conference of the FOCAC have consolidated China-Africa pragmatic cooperation.

"China has risen into a leading one of multilateralism, openness and cooperation," Teshome said. "China has always been standing with African countries, with a hope to stand with the whole development of Africa. President Xi's vision to build a community with a shared future for mankind is appreciated by African countries. All countries in the world will benefit from Chinese solutions," he noted.