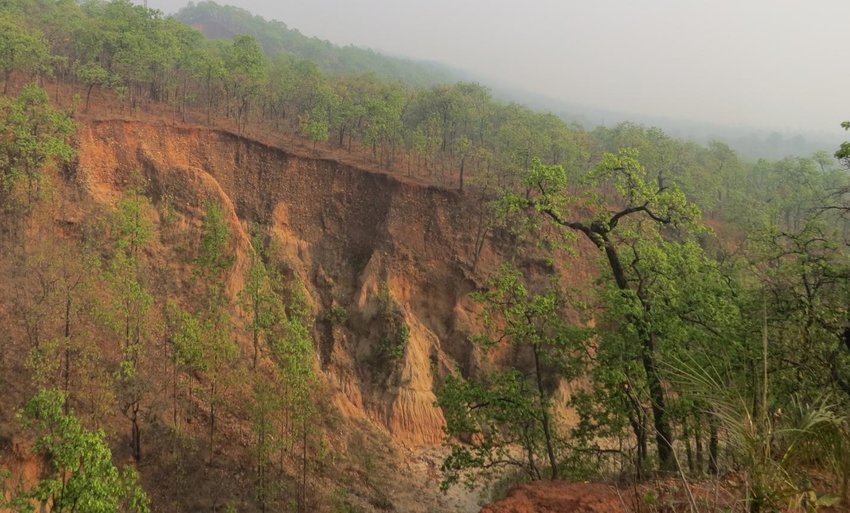 Kathmandu, 22 June (2022) - Ten days after the World Environment Day, Nepal observed the Chure Conservation Day on June 16 in a grand manner. As usual, the importance of Chure region and need for its conservation was voiced vibrantly in various programmes organized in different parts of the country.

Varieties of tree species were planted in a huge number, creating doubt whether they would be taken care well to flourish. Let's wait to see whether the planted trees will wilt or rise. Accountability of plantation organizing institutions lies in the guarantee of: Plants/trees deserve to grow; and people deserve to know (about it).

On the occasion of the 8th Chure Day, President Bidya Devi Bhandari attended a tree plantation programme at Jhunga of Dudhauli Municipality-3 of Sindhuli district and urged all sides concerned to devote to Chure protection. The RSS had reported: The Head of the State urged the newly elected local representatives to forward development activities, taking into account the rights of people and the risk of environmental degradation. Extraction of natural resources as pebbles and sand should not jeopardize environment, she made aware.

"The Chure ecosystems must be protected," President Bhandari said, "Sustainability of ecosystem is linked to the life of people, animals and plants. Time has come to reconsider how the ecosystems damaged in the past due to rapid urbanization, population explosion and migration can be restored,"

Presidents' statement clearly shows how we have exploited the Chure region, causing threat to human and animal lives with damages of ecosystems. Loss of ecosystems is the loss of species, and loss of harmony among people, animals and plant lives. Environmental crisis is indeed an existential crisis.

The Chure region stretching from the east to west is the southern-most hill range in Nepal, which is young and fragile. Therefore, any anthropogenic and natural events easily cause and intensify the depletion of this region. Floods and landslides are reported rife every year.

Full of biodiversity and ecosystems, the Chure region occupies 12.78 percent of total land and covers 37 districts and some 50 percent of the country's populations. In addition to this, the Terai-Madhes region considered the granary of the country lies adjacent to this very region.

Considering the value of Chure region, the government had even constituted a body to look after the pertinent issues- The President Chure Tarai-Madhes Conservation Development Board, setting the slogan, 'Chure's Soil to Chure and Chure's Water to Everyone.' The vision of the Board is also to link the Chure conservation to the economic prosperity.

It is worth mentioning here that then President of Nepal, Dr Ram Baran Yadav, had taken special initiative for the conservation of Chure region. His efforts resulted in incorporation of Chure conservation in government policy and programmes. He is found speaking frequently on the value of Chure and urging government and activists to devote environment protection and criticizing wrongdoing in Chure. Lately, giving an interview to a reporter with Kantipur national daily, he showed much worry, "Political parties allocated local and province level election tickets to those who exploited Chure. Those securing victory concentrated on Chure depletion to fill their deep pockets."

Recently, the media have brought an appalling story that the rule on standard for crusher industries has been amended in a way that would reach the marauding excavators and crusher industries deep into rivers, closer to cities, cultural sites, forests etc. It is however in hilly regions. Allowing crusher industries closer to settlement, river and highway is evident expansion of 'Chure devastation model' to other parts of the country.

The crusher industries are so militant that they even kill those who question their scot free operation. We have a horrible reminder that 24-year-old Dilip Kumar Mahato was crushed to death by tippers, carrying riverbed booty at Aurahi of Dhanusha district in January 2020. Dilip had objected to the illegal extraction of riverbed.

To this, environmental expert, Dr Ngamindra Dahal, also expressed worry, "As the Chure region witnessed massive degradation in soil, forest, water and animal species, resource allocation for conservation was/is urgent. But, the politics is foisted in the resources allocation, which has botched up the conservation efforts."

He further said it is sheer contradiction on the part of political leaderships and government behaviour that haughtily advocate for the Chure conservation in the top levels and at the same time provide protection to those groups indulging in the extraction of sand, pebbles, and stone at local levels.

According to Dr Dahal, only trees were cut down and supplied in the country and across border from the Chure region initially, but with the rapid urbanization and population explosion, the need of additional sources for construction as pebble, sand, soil and stone grew alarmingly. It resulted is massive depletion of Chure resources, posing severe threat to human, animal and plant life.

With this, it is fair to say that Chure conservation warrants attention and engagement not only from local people, their representatives, and the three-tiers of government along with balanced act of development and environment but also seeks the political accountability which largely impacts the law and policy. Setting vision of Chure conservation with its link to economic prosperity on the one hand and letting marauding dozers and excavators to ravish the Chure region is nothing other than egregious contrast in Nepali politics and governance. As long as the Chure region is exploited for individual and political profits, Chure conservation continues to be a chimera- a sweet slogan and biting reality.