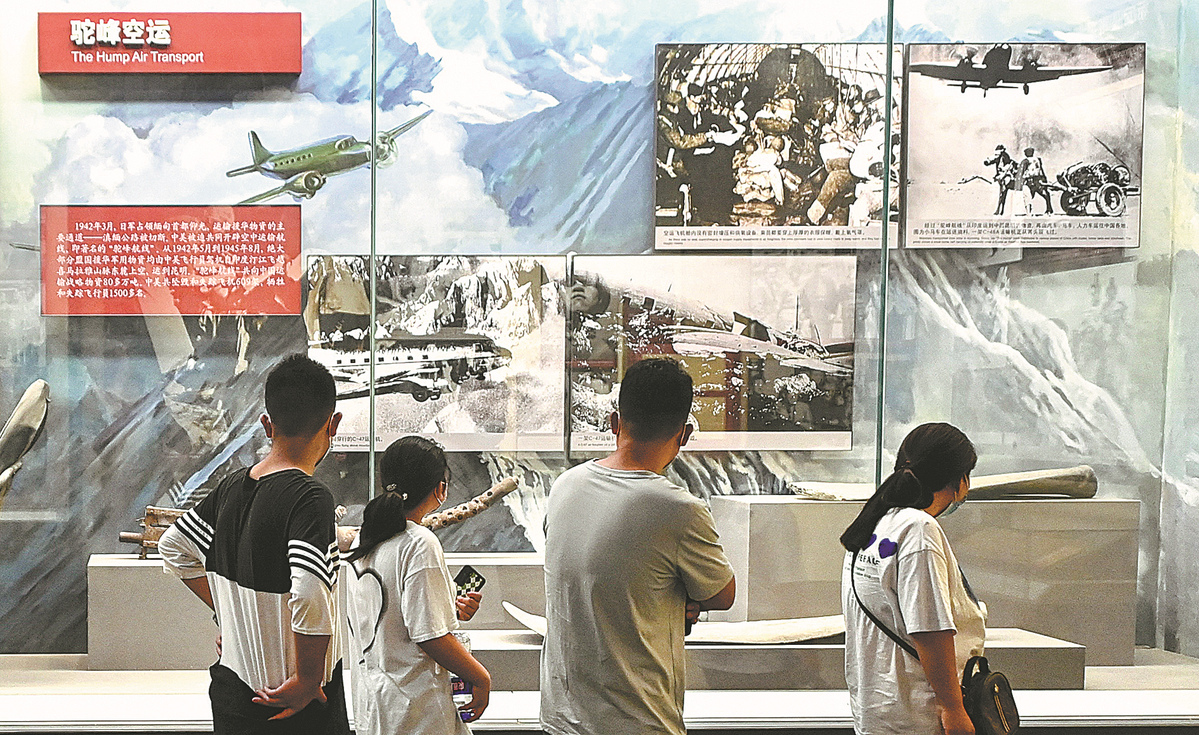 Visitors view an exhibition at the Memorial Hall of the War of Chinese People's Resistance Against Japanese Aggression in Beijing on Monday, marking the 77th anniversary of Japan's unconditional surrender to Allied Forces in World War II. WEI XIAOHAO/CHINA DAILY

The Japanese government announced its unconditional surrender on August 15, 1945, which marked the final victory of the World Anti-Fascist War.

Having committed heinous crimes that traumatized the people in Asian countries, the Japanese militarism grossly trampled on lives and human rights, and seriously threatened the human civilization.

Japan should have reflected on this history and made concrete efforts to regain trust from its Asian neighbors and the international society. However, it is trying to turn back the clock in today's world 77 years after the World War II ended, easing its military constraints and roping in countries outside the Asia-Pacific region to instigate confrontation.

Japan's wrongful practices are against history and justice and undermine the peace and stability in the Asia-Pacific region. Peace-loving countries both in and outside the region should stay alert.

To face up to history and reflect on its crimes is the precondition for Japan to achieve self-redemption and return to the international society. However, in the past 77 years, the country has never been genuine in doing so, and its right-wing forces have never ceased challenging history and international justice.

What's worse, new changes have been taking place in Japan's political circles lately, and there's an increasingly louder voice in the country demanding to overturn the verdict on Japan's wartime crime.

Japan, covering, denying and even whitewashing its invasion history, is seriously challenging the victory of the World Anti-Fascist War and the post-war international order.

The Japanese right-wing forces are denying the history to break free from the post-war international order and expand Japanese military. Hyping the so-called "threat" from its neighboring countries, Japan colludes with major countries outside the region and tries to divide the region and provoke confrontations.

While exaggerating regional tensions, Japan is also making its military security policy more and more aggressive. It accelerated the amendment of its pacifist Constitution, revised the "three principles" on arms exports, passed the new security law and lifted the ban on collective self-defense.

Besides, the country has adopted new versions of the National Defense Program Guidelines and Medium Term Defense Program, and increased its military budget to develop the so-called counter-strike capabilities.

Japan is deviating further from the path of pacifist and exclusively defense-oriented strategy, and constantly releasing dangerous signals of denying the post-war peaceful development. It has become a severe threat against the peace and stability in the Asia-Pacific region.

The recent high-profile practice of Japan on the Taiwan question further revealed the country's vicious intention. Japan has illegally invaded Taiwan and put the region under colonial rule for half a century, killing more than 600,000 people in Taiwan. The Japanese side should reflect on this period of history, abide by the principles of the four China-Japan political documents and the commitments it has made, and speak and act prudently on the Taiwan question.

However, the country has been acting negatively on the Taiwan question lately, and some Japanese political forces even declared that a Taiwan emergency is a Japanese emergency. The Japanese government recently issued the 2022 defense white paper, which fanned up the so-called military threat against Taiwan from the Chinese mainland and said stabilizing the situation surrounding Taiwan is important for the security of Japan and the international community.

The above acts seriously violated the basic norms governing international relations and the solemn promises made by Japan to China on the Taiwan question. They undermined the political foundation of China-Japan relations.

The visit to China's Taiwan by the Speaker of the U.S. House of Representatives Nancy Pelosi was widely condemned by the international society. However, Japan, long been a de-stabilizer for the Taiwan question, blatantly supported the wrongful visit that violated the sovereignty of China and made irresponsible remarks on China's legitimate counteractions. It is joining the U.S. to contain China with the Taiwan question.

Japan is acting as the aid of the evil to seek private gains by disordering the Taiwan Strait and the Asia-Pacific region. Is the country trying to repeat history and once again following a beggar-thy-neighbor approach?

Those who try to turn back the wheel of history will come to no good end. Only by halting its wrongdoings, reflecting on its past crimes, learning from its experiences, respecting the security concerns of its neighbors in Asia and following a path of peaceful development can Japan find its position in regional development.

If the country continues to go against the trend of the times, it will never get rid of the image of "the least welcomed country" but eat its own bitter fruits.