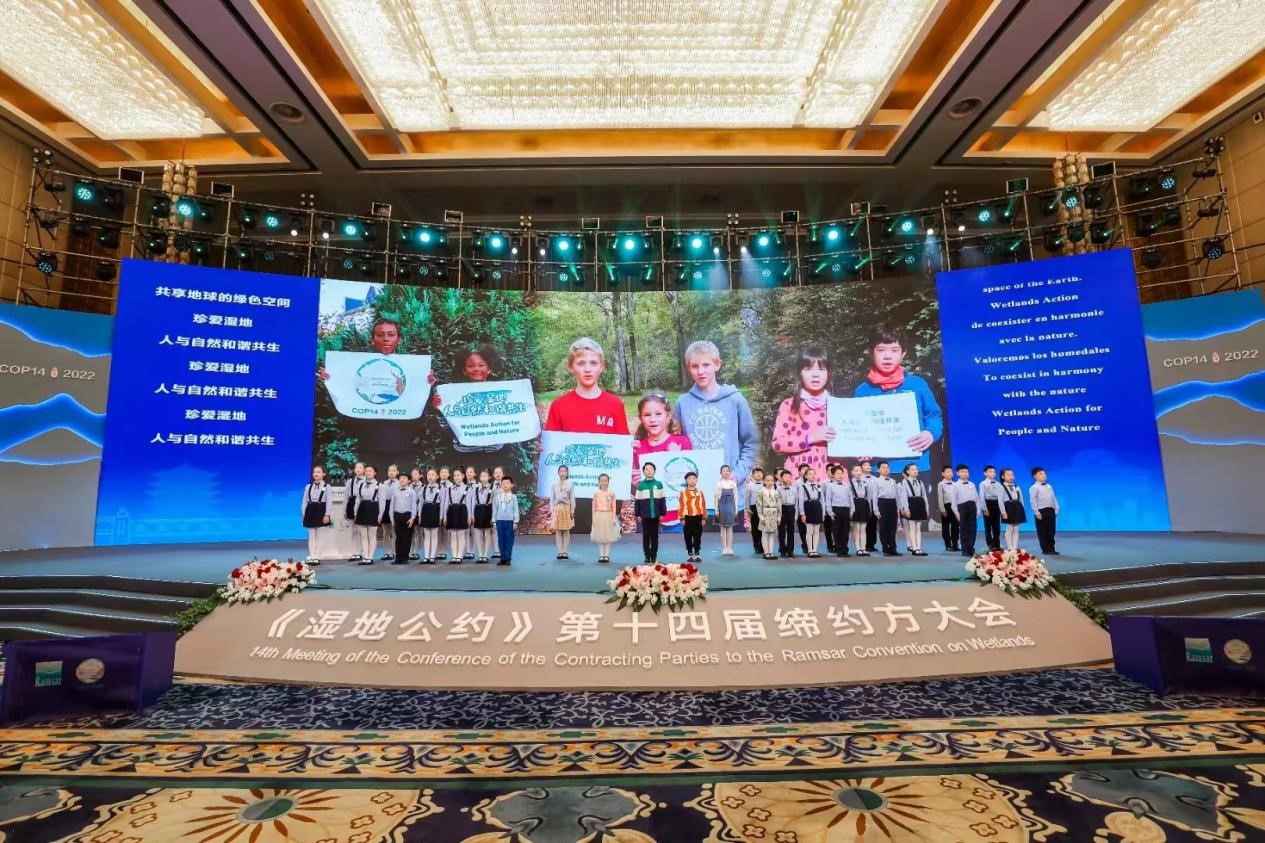 The 14th Meeting of the Conference of the Contracting Parties to the Ramsar Convention on Wetlands is held in Wuhan, central China's Hubei province, Nov. 5. (Photo from Dazhong Daily)

The 14th Meeting of the Conference of the Contracting Parties to the Ramsar Convention on Wetlands (COP14) was held in China's Wuhan and Switzerland's Geneva between Nov. 5 and 13.

After launching a series of activities, the meeting concluded with 21 resolutions.

Among the important outcomes of the gathering were the Wuhan Declaration as well as the Global Strategic Framework for Wetland Conservation 2025-2030. The latter specified that it will ensure the consistency and continuity between the fifth strategic plan and the objectives of the fourth phase, while focusing on the role of wetland conservation and restoration in promoting sustainable development and addressing global environmental challenges. It also called for accelerating wetland conservation and restoration actions, and curbing wetland degradation.

Musonda Mumba, secretary-general of the Ramsar Convention, said she was glad to see the publication of the Wuhan Declaration, from which she saw China's commitment to increase input in wetland protection.

At the side event, visitors could hear the bleat of deer, chirps of birds, as well as the sound of wind brushing against rice fields. By pressing "smell boxes," they could embrace the aroma of sweet flag, lotus, mint, chameleon plant and other wetland plants. Besides, visitors could also put their hands in "blind boxes" to feel the rough bark of the trees, the soft moss and other life forms in wetlands.

China's remarkable progress in wetland conservation over the past 30 years could be seen from the statistics showcased at the side event.

The country boasts 56.35 million hectares of wetlands, the largest in Asia and the fourth largest in the world. Its wetlands account for only four percent of the world's total wetland coverage, but they have well satisfied the demands of 1/5 of the global population.

The total number of wetland-type nature reserves in China has reached more than 2,200, while 11 million hectares of wetlands are included in the country's national park system with stringent protection management.

China's wetlands not only build a shield for ecological security for coastal areas and provide valuable water resources for the people, but also play a crucial role in coping with climate change.

Mumba said China's achievements in wetland protection over the past 30 years, as well as the goals the country has set and its management models have set a good example for the rest of the world. China's experiences will help build global synergy in wetland protection, she added.

Wuhan, the main venue of the COP14, is a city by the water. It is home to 1,642 square kilometers of wetlands, or 18.9 percent of the city's total area. It was listed as an international wetland city in June this year, becoming one of the 13 cities in China that have won the title.

Cai Song, head of the Wuhan Municipal Bureau of Gardening and Forestry, said that Wuhan has set up five wetland nature reserves and 10 wetland parks, including six wetland parks at the national level. Besides, 71 lakeside parks are built or currently under construction in the city. Wuhan is the provincial capital that owns the most national wetland parks, Cai added.

Thanks to the city's efforts to advance ecological compensation, return fishing to wetlands, and increase plant vegetation, Wuhan had discovered and recorded 447 wild bird species as of October this year, including 96 under key national protection.

Through the COP14, Wuhan showed its charm to the world as an international wetland city, and has become an important window for the world to better observe China's wetland protection achievements.