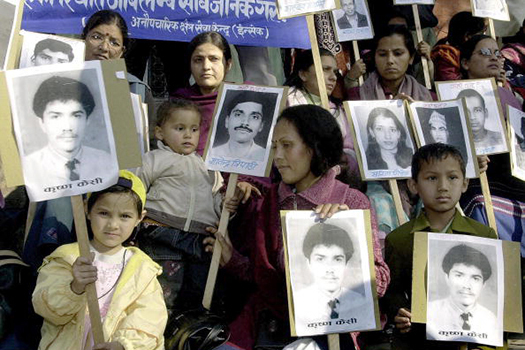 With no justice in sight conflict victims commemorated International Day of the Disappeared (August 30) in Nepal. As the nation battles pandemic COVID-19 by issuing prohibitory order in many parts of the country including the capital city Kathmandu on that particular day, nothing big was done to pressurize the government except issuing a joint press statement by Victims Associations and Human Rights Organizations calling for an end to continuing delays in justice. Like previous years this was a ritual for many national and international organizations working in the field of human rights, security and justice.

Nepal witnessed 10-year (1996-2006) armed conflict in which more than 13,000 people got killed, 1,325 people got disappeared, an estimated 20,000 were tortured and more than 78,000 people were displaced. Of all cases of enforced disappearance, 77 percent was committed by state forces, 13 percent by unidentified groups and 10 percent by the Maoists.

Southern neighbour India brokered Comprehensive Peace Accord (CPA) signed on 21 November 2006 between the then insurgents Nepal Communist Party (Maoist) and Nepal government that marked the end of armed conflict paving the way for rebel force to join mainstream politics. The Accord contains a clause (5.2.5) which envisions two independent, impartial, accountable high level commissions - Truth and Reconciliation Commission (TRC) and Commission of Investigation on Enforced Disappeared Persons (CIEDP) were formed to provide recommendation for legal actions within its two years tenure on cases of grave violations of human rights.

First two years of TRC and CIEDP collected 60, 298 and 3,093 complaints respectively and did nothing substantial and further extension was asked. And, now it is already three times the government has extended the tenure of these two commissions by one year in response to pressure from the international community and victims to keep moving the transitional process forward.

When we look back to assess the progress made, it seems that we are in the same place from where we had started our journey. Five years have passed since the establishment of TJ mechanisms, 14 years of CPA and during that period 11 times governments have changed in the country but very little has been done on issues like truth and reconciliation, missing persons, reparation and compensation of conflict victims. So far not even a single case has been investigated properly and recommended for prosecution. Not only has this made the victims unhappy but also slowly their faith on Nepal's justice system has eroded to a large extent.

Although tenure extension of TRC and CIEDP by Nepal government is a welcome step it is less likely to bear any fruit as the Enforced Disappearances Enquiry, Truth and Reconciliation Commission Act-2014, is not in line with international standards and the judgments of the Supreme Court of Nepal. Time and again the commissioners of two commissions have asked the government to amend the legal provisions first; otherwise mere extension of the term with status quo would be meaningless. However, the government has turned deaf ear to this plea.

According to Human Rights Watch, extension without necessary legal and institutional reforms ordered by the Supreme Court and the United Nations are insufficient to comply with international standards, Amnesty International and the International Commission of Jurists.

Since the signing of the CPA, the issue of transitional justice has become contentious for which raucous debate is going on inside the country. One section of intellectuals comprising conflict survivors, CSOs and human right groups are demanding prosecution while another section with Maoist leaders and communist intellectuals are in favour of general political amnesty for war-era cases regardless of its severity. This tug of war is ongoing and nobody knows how long will it go. Not to mention such incident is further rubbing salt in the wounds of poor victims.

Till date neither the political parties nor the government has clear stand and position on resolving the transitional justice cases. Sharing his experience in recently organized Summer School on Transitional Justice by Nepal Peacebuilding Initiative, Nepal and The Hague University of Applied Sciences, Netherlands, Prof Bishnu Pathak, the former senior commissioner of CIEDP, remarked that lack of national solid strategy and political will is the prime cause of sluggish progress in transitional justice process.

On the matter of handling insurgency era cases, the tussle is going on between Nepal government and the Supreme Court. In February 2015 a five-member special bench led by then chief justice Kalyan Shrestha issued a landmark ruling order to the government to revise the controversial Transitional Justice Act - 2014. Unhappy with this decision, the same year in April Prime Minister Sushil Koirala-led government filed a review petition challenging the ruling. And, now after postponing hearing on the review petition for 25 times, giving shock to Maoist leaders on April 26 this year, a full bench of the apex court has rejected the government's petition to review the 2015 verdict that bars authorities from granting amnesty to convicts of serious human rights violations. UNHCR and conflict victim have welcomed the court's decision.

Earlier having some sense of possible apex court decision on hearing of review petition, the government in 2018 had prepared an amendment draft for the Act-2014 adhering to the Supreme Court verdict and international standards of transitional justice. But the 22-page draft prepared under the leadership of Attorney General Agni Kharel was withdrawn following controversy before it was tabled in parliament.

Following the verdict on the review petition, the government has now no choice but to look into the transitional justice laws and scrap amnesty related provisions. Nepal is a member of the UN Human Rights Council, so it is obvious for international community to have high expectations from the government after apex court decision.

As Nepal's transitional justice process is at crossroads with international community watching closely, it's high time for the government to give momentum keeping in mind that four Ds (delay, deceive, deny and dilute) formula is not going to work anymore. It should adopt consultative, coordinated and transparent approach, flaws in transitional justice laws governing TRC and CIEDP should be revised keeping victims in centre and making it widely accepted. This will give the clear picture of modality of the Nepal's transitional justice process to all the stakeholders concerned within and outside the nation. After that let all the activities operate within the boundary line of this modality aiming to complete all the remaining tasks in the stipulated timeframe.

Otherwise, sooner or later there is a risk that conflict-era cases might get internationalized creating more difficult situation for Nepal government.

The writer is a development professional and General Secretary of Institute of Social Science Research (ISSR).