'No debate, no democracy': journalists in Nepal fight new threat to press freedom 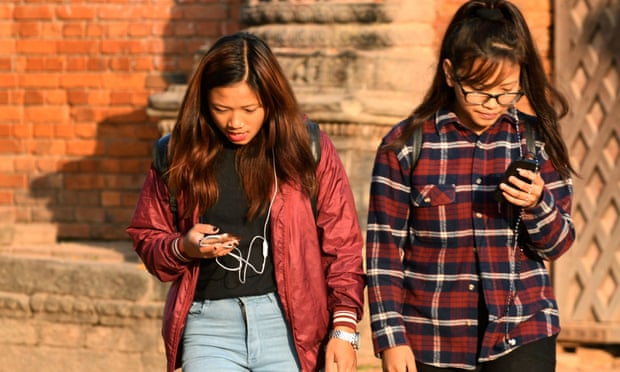 The information technology bill, introduced at the end of December, imposes fines of up to 1.5m rupees (about $13,000) for anyone posting content deemed to promote hate crime or ridicule. It would apply to all social networking sites.

Last month the ruling Nepal Communist party (NCP) also tabled a “special service bill” that would allow the National Investigation Department to collect information without a warrant or court order.

The information technology bill is expected to be debated by MPs this month. Critics fear it will pass with ease because the NCP holds a majority in parliament.

Arjun Giri, an editor at the online news portal Tandav News, was detained for four days last April under the ETA after writing a story alleging fraud against a powerful local businessman that was shared on Facebook.

“I got a shocking call after a few days from the local police. Police took me into custody, citing that I violated the Electronic Transaction Act,” Giri said.

Other journalists and activists raised the alarm over his detention. “If media and journalists did not raise their voices for me I would have been in jail now,” he said. “This government is misusing its power and becoming a dictator.”

More recently the rapper Samir Ghising, also known as VTEN, was jailed for a week under the act for “antisocial, vulgar and derogatory language, and spreading the wrong message in society in his songs”.

Comedian Pranesh Gautam was jailed for nine days in June for critiquing a film on his YouTube channel.

According to Freedom Forum, 38 journalists were arrested, detained or questioned by police in 2019. Taranath Dahal, the forum’s director, said: “The situation is sinister. If the proposed bill becomes law, the media and journalist[s] will be the most targeted.

“We are living in the digital era and we will not be allowed to give our opinions, or speak and express our feelings, due to fear of a heavy fine and jail punishment, which will promote self-censorship. That means there will be no public debate.

But Kalyani Kumari Khadka, chairman of the development and technology committee, which introduced the legislation, said: “These clauses on the bill are extremely needed because our society is going out of control.”

“Both parliamentary bills, if allowed to become law, will adversely affect citizens’ constitutional rights relating to freedom of opinion and expression. The direct effect of [proposed] restrictive provisions will be on journalists, but the ultimate impact will be on people as a whole. Their right to be informed citizens of the country is being curbed for no fault of theirs.

“Constitutionally, Nepal is a democratic country, not a communist country like North Korea. So, the present ruling party cannot – and must not – be allowed to make laws which seek to dilute the norms and values cherished in a democratic society.”