An appeal from Ganga Maya Adhikari: Demanding justice for my son and husband 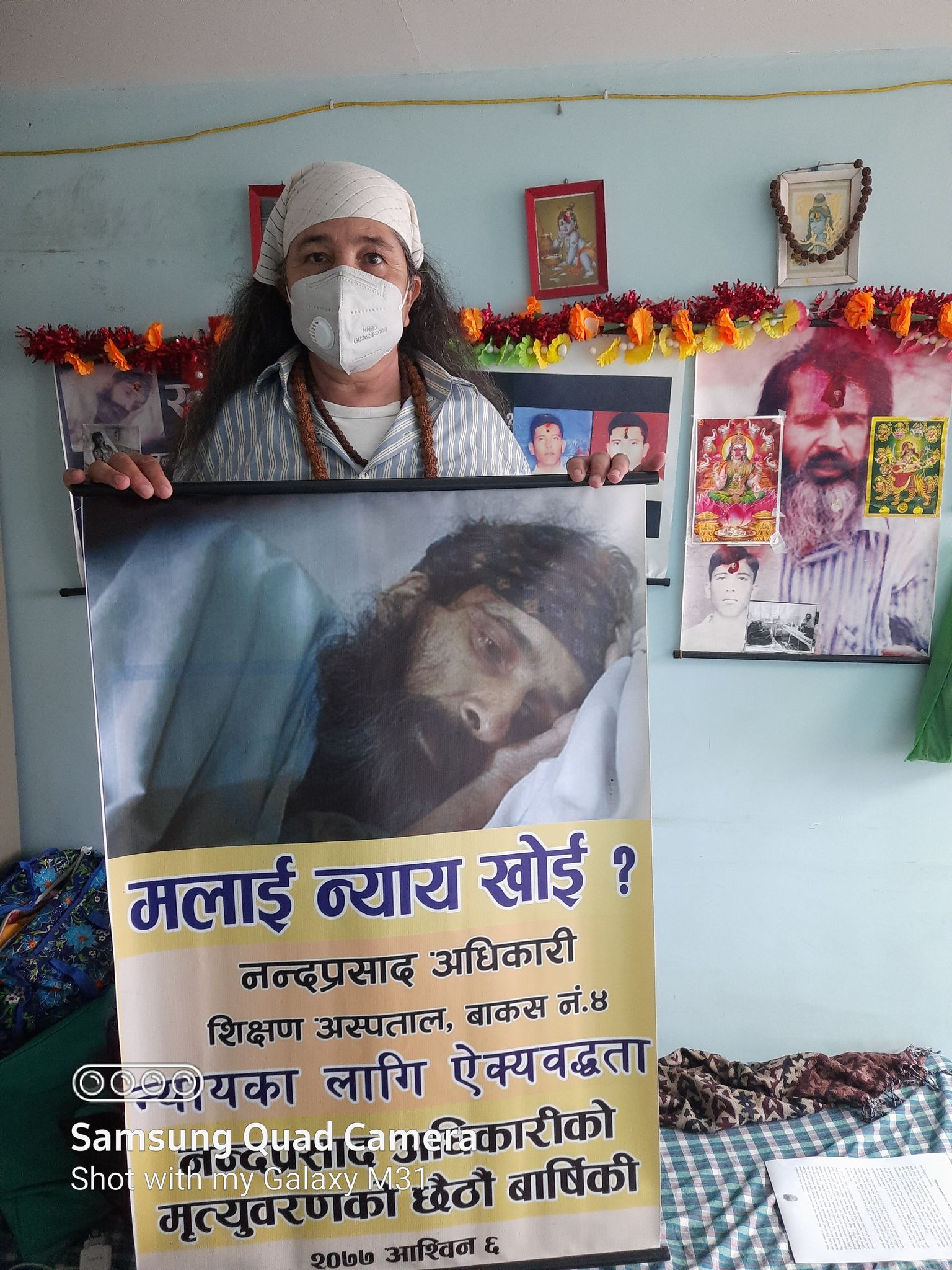 First of all, I would like to express my heartfelt gratitude for standing along with me throughout all these years in my battle for truth and justice for the murder of my son. On the 6th anniversary of my husband’s death (22 September 2014), I pay tribute to him and wish his departed soul rests in peace. I firmly demand justice for his death whose body is stilllying in Box No. 4 at Teaching Hospital Maharajgunj, Kathmandu. It hurts me that I haven’t been able to perform his final rites, as I have vowed not to do so until justice is served.

For more than a decade, in the name of justice, all I have got is false promises from the Government. That is why, I once againappeal for your support and solidarity for truth and justice. It is painful for me to have to revisit my memory and speak of what happened to my young son, and my husband Nanda Prasad Adhikari, who died fighting for justice for our son, but yet let me recount it.

My husband and I were known to be independent minded, with a strong sense of right and wrong. We were seen with suspicion by local Maoists, who had links to the leadership of the Maoists.On the accusation of being a spy against the Maoist,they killed our son Krishna Prasad Adhikari in June 2004 at BakulaharChowk, Chitwan, when he was visiting his grandparents.He was merely a young 17-year-old boy, who had just attended his School Leaving Certificate exams. He was an innocent (not supporting any of the conflict parties) young boy,completely unassociated with the conflict.

Iand my husband approachedvarious national and internationalhuman rights orgaizations, and also knocked the door of the Government and as well asindependent bodies, including the National Human Rights Commission (NHRC). With the hope of getting justice, we filed a FIR at the Chitwan District Police Office against Chhabilal Paudel, Januka Paudel, Meghnath Paudel,Bishnu Tiwari, Subhadra Tiwari, Sita Adhikari, Kali Prasad Adhikari, Himal Adhikari, Ram Prasad Adhikari,BhimsenPoudel and Parashuram Poudel. Following the FIR, we got threats and intimidation from local Maoists, making it hard for us to live in the village. Thus, we were forced to migrate to the District headquarters of Gorkha, and later to Kathmandu.

We were shattered to know that on 12 June 2006, the Council of Ministers led by late Girija Prasad Koirala, the then Prime Minister of Nepal decided to close the case file, labeling it as a conflict-era case which would be dealt by the then yet to be formed transitional justice mechannisms.Then, we filed a complaint at the NHRC, which recommended the Government to investigate the case, but nothing happened.

This was the time, when my husband and I were detained in police custody and were subjected to ill treatment several times. We were also forcefully admitted to a Mental health hospital,Lagankhel in Lalitpur for 39 daysstating that we are mentally ill. This was nothing but a move from the Government to demoralize us and discourage our fightfor justice. But we wereadamant in our fight for justice. However, the journey to justice was getting bleaker day by day. It was hard to see any ray of hope from the legal course we took.

Thus,on 12 August, 2013, we had no option but to start a fast-unto death strike to pressure for justice.

On 3 September 2013, the Supreme Court had issued an order to force feed us and also to make public the latest details of the investigation into the case.But we denied to accept force feeding and continued our hunger strike. On 6 September 2013 Nepal Police arrested one of the accused,Ram Prasad Adhikari,and thus hoping justice is on its course we broke our 47th day hunger strike but following his release after 22 days of arrest without any proper investigation, on 24 October 2013, againI and my husband jointly stageda fast-unto-death atBir Hospital.

On 13 April 2014, ChhabilalPoudel, one of the accusedand 12 others were charged with the murder of my son. We were hopeful that we would get justice. But on 17 April 2014, the Chitwan District Court decided to release Chhabilal on bail, instead of remanding himfor investigation. At that time Pushpa Kamal Dahal explicitly requested Khila Raj Regmi, the then Chief Justice and a Chairman ofCouncil of Ministers not to arrest anyone associated with the case. Similarly, BaburamBhattaraialso openly challenged the Government to arrest him if it could.On 18 June 2018, the Hetauda Appellate Court also upheld the decision of the Chitwan District Court.

On the 334th day of the Satyagraha, my world fell apart asmy husband breathed his last at Bir Hospital, leaving me all alone in this fight for justice. I was already wounded by the pain of losing my son and losing my husband added immeasurable pain in my life. Only after this loss, I received a 5-point commitment from the Government, led by the then Prime Minister late SushilKoirala and suspended hunger strike on 359th day. In its Commitment, the Government committed to present all the accused in the court, take action against them even if they are outside the country, manage lifelong treatment for me, bear the cost of living for my family, provide security to me and my elder son Noor Prasad Adhikari and arrange necessary management for the cremation and other funeral rites of my late husband.

Despite many obstacles, I gathered all the strength in me and decided to move forward in this battle for justice.I receivedimmense support from the human rights and victim community. I was encouragedto continue my fight for justice without going through hunger strike as well. Hence, we filed an appeal on 28 June 2015 Supreme Court after the Hetauda Appellate Court upheld the decision of the Chitwan District Court to release the defendants on bail. On 21 December 2015, the Supreme Court ordered the Government to take ChhabilalPaudel into judicial custody. Following long struggle, including staging 48 days hunger strike, on 9July 2018, he was forced to surrender to the Supreme Court and was sent to prison, to stand trial.

On 9 September 2018, when I was informed that the Chitwan District Court acquitted all the defendants, except Rudra Acharya who was absconding, I was devastated. The Court stated that there was lack ofenough evidence to prove the defendats’involvement in my son’s murder.The case was adjourned until Rudra Acharya will be presented in the Court.

It was a huge setback on my arduous journey for justice, but I did not give up. On 4 September 2019, the decision was appealed at the High Court Patan, Hetauda Bench and on 11 November 2019, it revoked the decision of Chitwan District Court and summoned the defendants. It is regretful that no hearing has taken place so far and the hearings are justbeing postponed indefinitely . It seems that the pandemic situation at present is being used by the Court as a favorable excuse to postpone the hearing date.

Regarding Rudra Acharya, who was and is stillabsconding, I submitted an application at Police Headquarters, Naxal twice, on 17 May 2015 and 24 July 2019espectively demanding the information about the whereabouts of Rudra Acharya and why he is not brought to prosecution yet. Both times, I got repliesstating that the Police has found Rudra Acharya to be living in the United Kingdom and a ‘red notice’ has already been issued on his name and his search is on-going.On 24 July 2019, I had also submitted application to the Home Ministry, Foreign Ministry and had sent a letter through the post to the Office of Attorney General on 25 August 2019. The Office of Attorney General did not even acknowledge my application while the Home Ministry forwarded my application to the Foreign Ministry which stated that it had sent a request to the UK Government on 2 August 2018 to assist in the search of Rudra Acharya. Even after two years of the request, no action has been taken so far. It leaves me in despair that except for fake assurances, I have not received any sort of concrete assistance in bringing Rudra Acharya in prosecution.I would like to appeal to the Police and other concerned Ministries and authorities to stop protecting the defendants and fulfill their responsibility by actually bringing them to the Court.

With the hope that I would get justice, if my voice is heard at the international level,I met with UN Resident Coordinator Valarie Juliand on 9 January 2019 and on 4 February 2020 and requested her to support me in my journey to justice. She responded that she would support me as much as she could. I would once again like to request national and international community to support me for truth and justice and to prosecute those involved and fulfill the commitment the Government made to me.

With the rise in COVID-19 cases in Nepal, I was at risk of being infected as I was staying at Bir Hospital, which the Government decided to designate as a dedicated hospital for COVID-19 treatment. I am forever grateful to the human rights activists and human rights organizatios, who raised concerns about my health and issued an appeal to transfer me to a safer facility. As of now, I am at the National Trauma Center. I might be safe from COVID-19 but I am still in pain and anguish, and will remain so until I get justice for my son.

My pain knows no bound as my elder son Noor Prasad Adhikari is now being framed in a fake caseof attempt to murder and he is in judicial custody for than one and half year. A mother’s heart bleeds when she has already lost one son and her another son is being threatened and serving a jail term.I would like to appeal that my elder son be spared of this fake allegation,as I know how determined he is to get justice for his brother’s murder.

The investigation was reopened after an order by the Supreme Court, but it was not independent and credible. I am just a mother seeking justice for myson. I do not have much knowledge regarding all the legal procedures, but I have information from thehuman rights lawyers that they have collected ample evidence to show the lack of due diligence in the investigation. Thus, I demand for the reopening of a formal criminal investigation by a team of independent experts.

Thus, I appeal to you all once again for your support, in this heart-wrenching journey for justice. At times, I feel demotivated but then I remember the bright young face of my son, I remember the words of my late husband and that is where I find the courage to go on. I realize that I am not alone in this; there are people who are fighting for me by taking up this journey as their own. I remember all those mothers who have lost their sons and daughters in the conflict, at the hands of people who had no value for humanity. Then I understand the purpose of my fight and it gives me courage. I am not giving up unless all those who killed my son are punished. Only that day, I will feel my son got justice, his father’s dream will be fulfilled and both their souls will finally rest in peace.